Grab your fins and mask and get ready to dive into the world’s largest space pool. The University of Essex unveiled plans for the ultimate space training experience for future astronauts this week – a 50 metre (164ft) deep pool. While some dive enthusiasts may be foaming at the mouth to take a swim in this deep blue artificial sea, the training pool is still in the “exploratory discussions” phase of getting off the ground.

Partnering with Blue Abyss, who developed the concept, the university hopes to increase funding for the project. The space pool would not only create an environment akin to 100 feet under the ocean, but also simulates micro gravity in outer space.  John Vickers, managing director of Blue Abyss, says that the pool could help researchers study marine and human physiology in both environments, further train deep sea divers, and test new equipment in a controlled environment.

However, the proposed space pool would cost around £38million ($60 million). 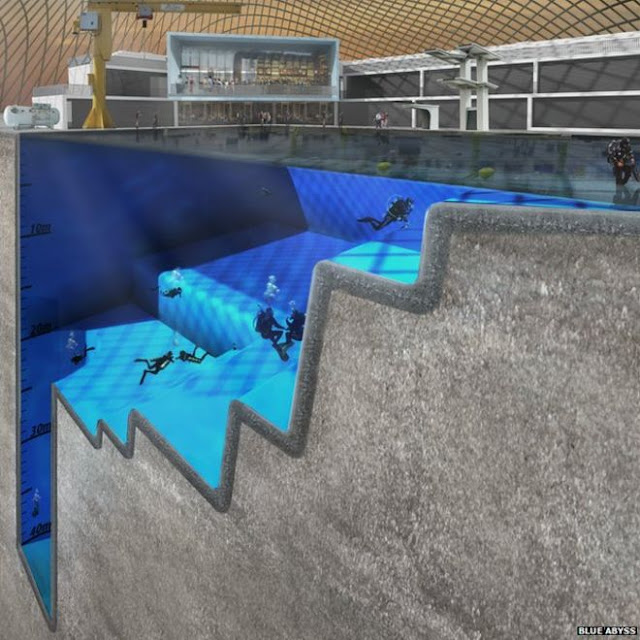 Bryan Morris, registrar for the University of Essex, hopes that commercial partnerships could help lead to new funding sources,  and is taking action to “developing links with a number of the world’s highest profile organizations and companies.”

The project has gained support from some space industry insiders. Walter Kuehnegger, who was one of the investigators on NASA’s Apollo Lunar Exploration project, has joined the Blue Abyss team as a consultant. Even the European Space Agency’s own Tim Peake is excited about the space pool’s possibilities,  “I support Blue Abyss and [see] this future facility as something that does not yet exist in Europe and that would compete with, or potentially even surpass, what is available in the United States and Russia.”