Return of the phantom stranger

It's always fascinating and exciting to see footage of marine life that you would never get to see in real life. In this instance the MBARI have some of the best recorded footage of the ghost shark known as a pointy-nosed blue chimaera. 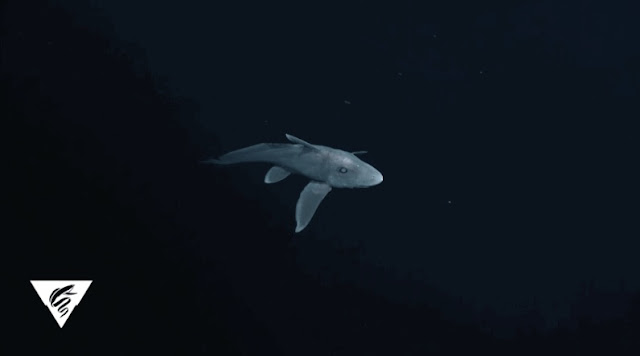 Ghost sharks, or what marine biologists call chimaeras, are a family of unusual fishes whose bodies are stiffened not by bones, but by plates and bone-like bits of cartilage. The animals may be rare, but there are about 38 species of chimaeras around the world.

Technically speaking, chimaeras are not sharks, having diverged from a common ancestor some 400 million years ago. These creatures, which are also related to rays, are veritable living fossils, confined to depths as low as 8,500 feet (2,600 meters).

Posted by Simon Morley at 12:13 No comments: Links to this post

Could this be the start of underwater transmissions, texts, sound and music? Maybe radio location for missing divers? Or do you think that the the underwater world has no place for man made signalling? What effect, if any, would it have on marine life?

"It's easy to take modern wireless communication for granted above ground, but it's useless in areas where the signals can't propagate, like underwater or in caves. DARPA might have a better way: its AMEBA (A Mechanically Based Antenna) team is developing portable ultra-low-frequency (1Hz to 3kHz) and very low frequency (3kHz to 30kHz) transmitters that could penetrate materials like water and stone with basic data. Scuba divers could send text messages to each other, for instance, while search and rescue teams could still contact the outside world while they're in tunnels." 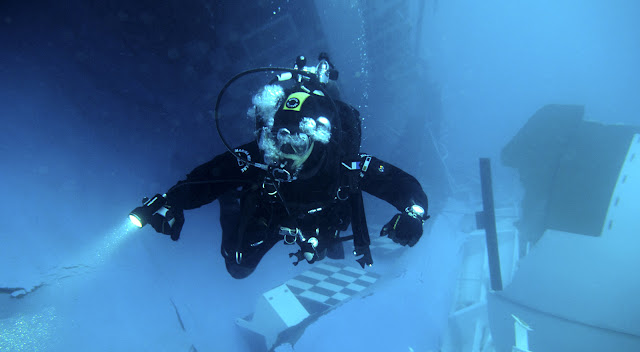 Posted by Simon Morley at 11:49 No comments: Links to this post

There's a first time for everything. Despite not having been in the water for the last few weeks due to the weather or more exactly the wind, I still managed to end up with a perforated eardrum and an ear infection in the middle of the day while at work. Don't ask me how it happened, I have no idea.

So lots of time spent at the doctors, then even more time at the specialists and all I have to show for it is a ton of drugs and no hearing. Just in time for the holiday season. Hooray. At least I got to see pictures of the aforementioned perforation. It's not a pretty sight looking at the inside of your own ears. Like looking at the moon's surface. Only pinker. And slightly moister. Also having the inner ear reconstructed about 8 years ago makes this a little awkward for the healing process.

Hopefully I'll be good to go in time for the traditional Xmas dive. Or maybe New Year....... 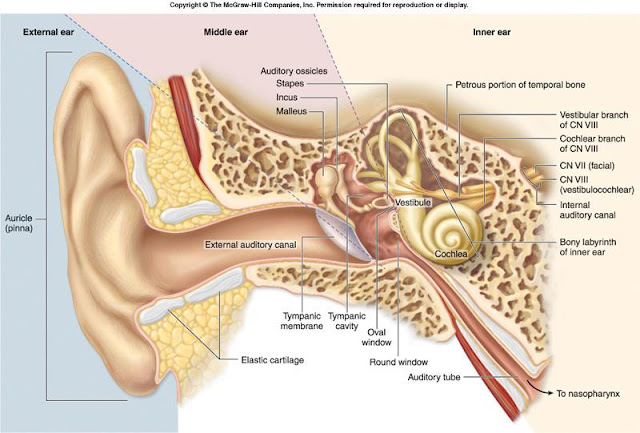 And now for the boring bit if anyone has ever wondered what a perforated eardrum is......

A hole or rupture in the eardrum, a thin membrane that separates the ear canal and the middle ear, is called a perforated eardrum. The medical term for eardrum is tympanic membrane. The middle ear is connected to the nose by the Eustachian tube, which equalizes pressure in the middle ear. A perforated eardrum is often accompanied by decreased hearing and sometimes liquid discharge. The perforation may be accompanied by pain, if it is caused by an injury or becomes infected.

Middle ear infections may cause pain, hearing loss, and spontaneous rupture of the eardrum, resulting in a perforation. In this case,there may be infected or bloody drainage from the ear. Infections can cause a hole in the eardrum as a side effect of otitis media. Symptoms of acuteotitis media (middle ear fluid with signs of infection) include a senese of fullness in the ear, some hearing loss, pain, and fever.
In patients with chronic Eustachian tube problems the ear drum may become weakened and open up.

Most eardrum holes resulting from injury or an acute ear infection heal on their own within weeks of opening,although some may take several months to heal. During the healing process the ear must be protected from water and trauma. Eardrum perforations that do not heal on their own may require surgery. How is hearing affected by a perforated eardrum?

Usually the size of the perforation determines the level of hearing loss--a larger hole will cause greater hearing loss than a smaller hole. If severe injury (e.g., skull fracture) moves the bones in the middle ear that send out sound, out of place, or injuries the inner ear, hearing loss may be serious.

If the perforated eardrum is caused by a sudden traumatic or violent event, the loss of hearing can be great and tinnitus (ringing in the ear) may occur. Chronic infection as a result of the perforation can cause longer lasting or worsening hearing loss.
Before attempting any correction of the perforation, a hearing test should be performed. The benefits of closing a perforation include prevention of water entering the middle ear while showering, bathing, or swimming (which could cause ear infection), improved hearing, and lessened tinnitus. It also may prevent the development of cholesteatoma (skin cyst in the middle ear), which can cause chronic infection and destruction of ear structures.

If the perforation is very small, an otolaryngologist (your ear, nose and throat physician) may choose to observe the perforation over time to see if it will close on its own. He or she might try to patch a patient’s eardrum in the office. Working with a microscope, your doctor may touch the edges of the eardrum with a chemical to stimulate growth and then place a thin paper patch on the eardrum.


Posted by Simon Morley at 01:17 No comments: Links to this post