IF you aren't already a follower of PADI on Facebook, you may not have seen their top 5 shots of 2013 which have netted 50,000 likes between them. Well worth checking out to see some of your most like phots, including one of the Kittiwake by some tall, Scottish, hairy person. Me!

"What does become apparent looking back over the year is that certain photo subjects really appeal to you; Turtles, Octopuses, Wrecks and Fresh water shots have all done really well and also a large number of black and white photos have done really well.    In this gallery I have selected 5 of your favourites from the year which between them have notched up close to 50,000 likes."
Posted by Simon Morley at 12:09 No comments:

Rockin' around the christmas tree 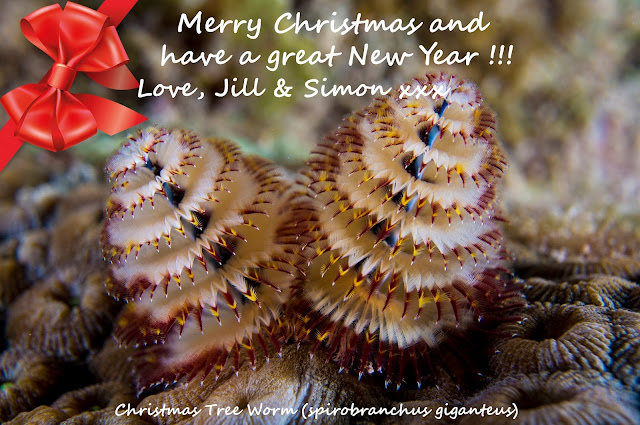 Posted by Simon Morley at 13:13 No comments:

A blustery day on the high seas couldn't dampen the enthusiasm for jumping in the water today with an 11 knot Easterly wind, a strong Northerly current and limited viz doing it's best to ruin the diving. But once we had battered our way through to calmer water on the main wall, all was right and well.

Spectacular shoals of fusiliers and trigger fish were wafting back and forth like a giant fans in the wind as well as regular visits from barracudas on their way to wherever it is that barracudas go to at weekends. 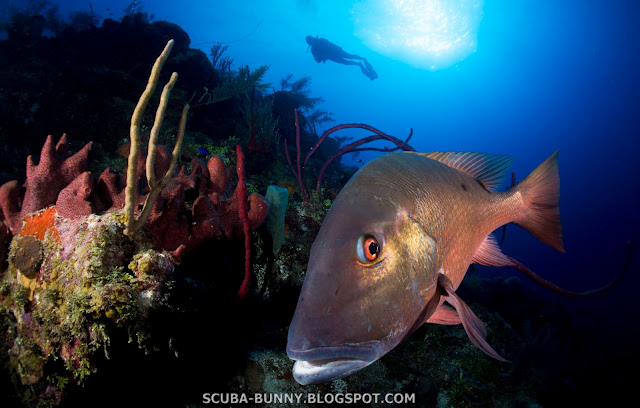 We made a sweep to the left and investigated some of the tighter cuts to see what could be seen and were rewarded by a hoard of angel fish that were mooching around not to mention some fantastic rope and barrel sponge formations that proved to be very photogenic indeed. 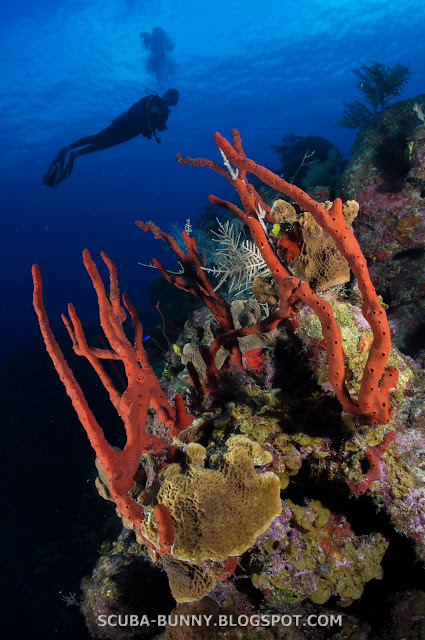 We hopped out on shore for a bit to let the sun slide lower over the horizon and also to allow the little stuff a chance to make it's way out onto the hard pan and get settled before we got back in to begin our hunt. 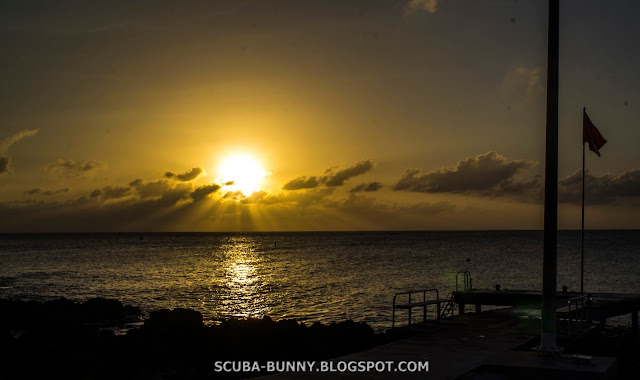 The bristleworms were out in force this evening, scuttling out in the open as well as getting onto and into everything they could find. It's like watching a miniature loo brush doing some sort of twisted mating ritual, lots of fun to be had. 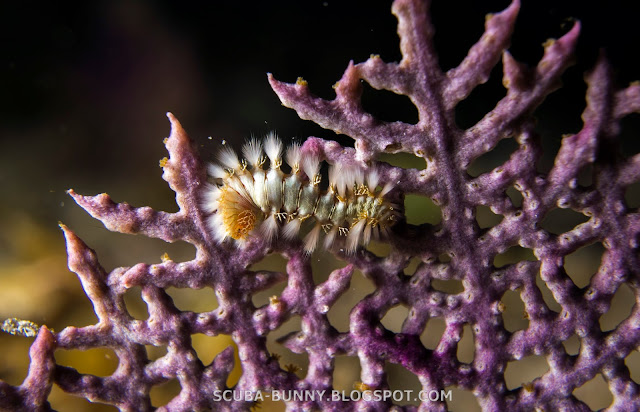 I was particularly pleased to find an absolutely tiny grape-cluster nudibranch hidden away on a single strand hydroid, a very lucky find as blink and you would miss it. One of my favourite nudibranchs to photograph so far this year. 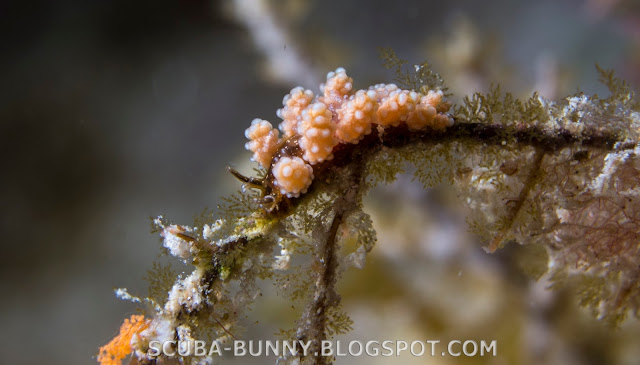 Not to be out done for attention, the crustacean contingent made a strong showing this evening with some fine examples of mud crabs, sanddollar pea crabs and star eyed hermit crabs. 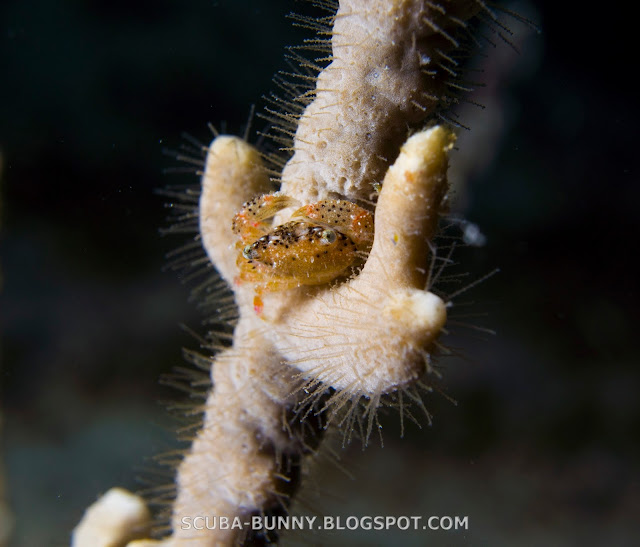 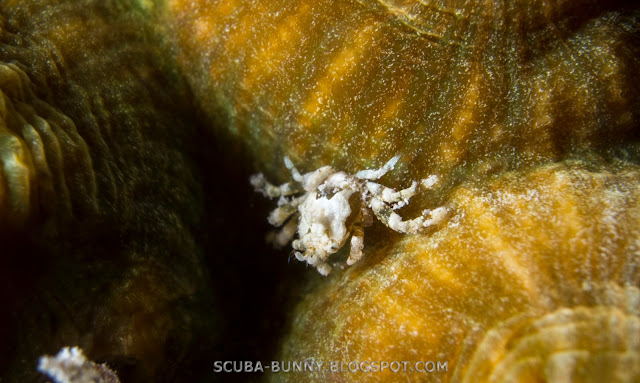 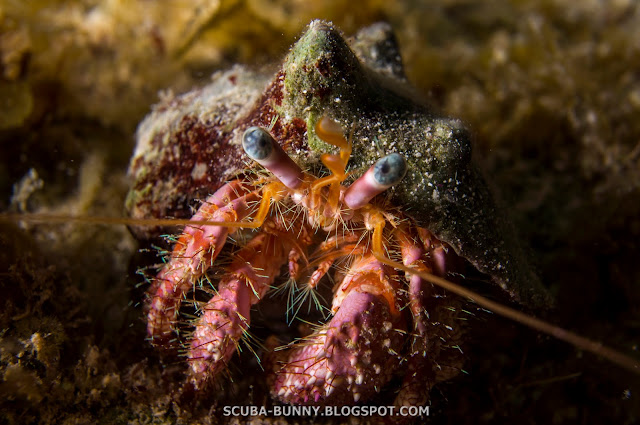 Of course as the old adage goes the best is always saved till last and just before we got out, I had the good fortune to spend some time with this little fellow which put the icing on the cake for me. 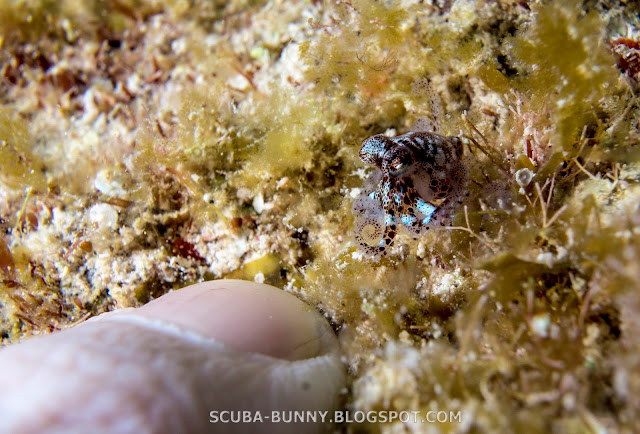 Posted by Simon Morley at 17:15 No comments:

Guess who's in the newspapers again? This time it's a nice little shot of the the sunset over Seven Mile Beach. This is why we moved to a small Caribbean island. 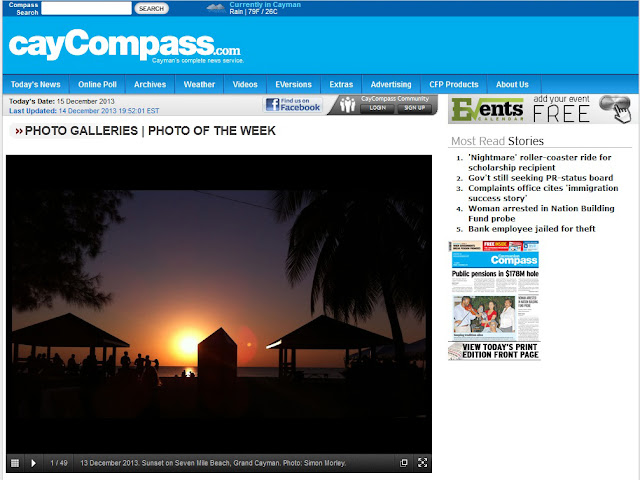 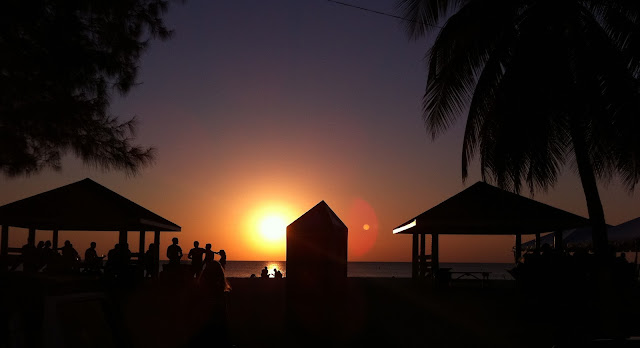 Posted by Simon Morley at 14:12 No comments:

We decided to do a double macro dive today which proved rewarding and frustrating in equal measures as not only where there some fantastic small critters to shoot but there were some big ones making an appearance as well which is not ideal when you're on a macro lens. A lot of surge and and very lumpy conditions didn't make things any easier but a dive is a dive is a dive. 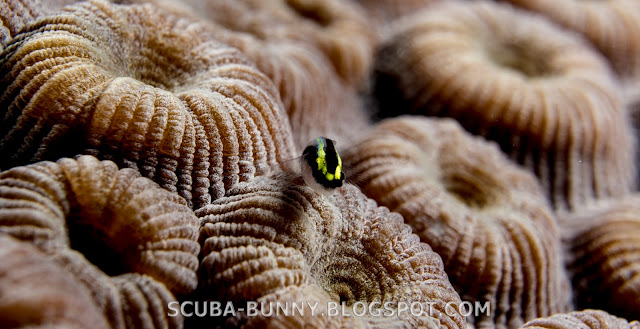 We were diving up at our old stopping grounds of Lighthouse Point today, and just like Black Carr, theres never a bad dive at Lighthouse. We headed off South down the miniwall and went with the slight Northerly current.

There must have been a moray explosion in the water over the last couple of weeks because there were loads of them all over the place, both free swimming and in holes. It was like watching a plate of spaghetti going mad. 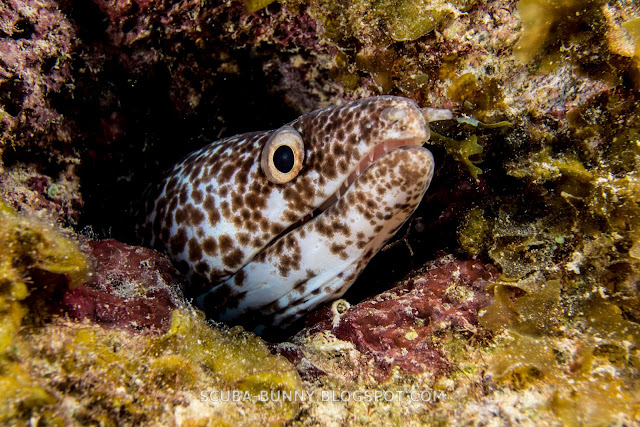 We had fly-bys of turtles and rays off in the blue but nothing that could be captured on the lens I was shooting with today. A good selection of crabs around on the hard pan and hiding amongst the corals including this little pea crab doing it's best to look invisible. 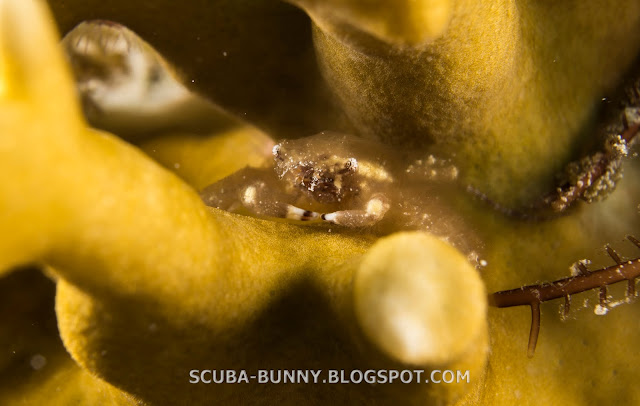 There were a lot of barracudas hanging out in the shallows and at cleaning stations, this big bruiser was more than happy to let me get up close and personal before disappearing off into the blue. 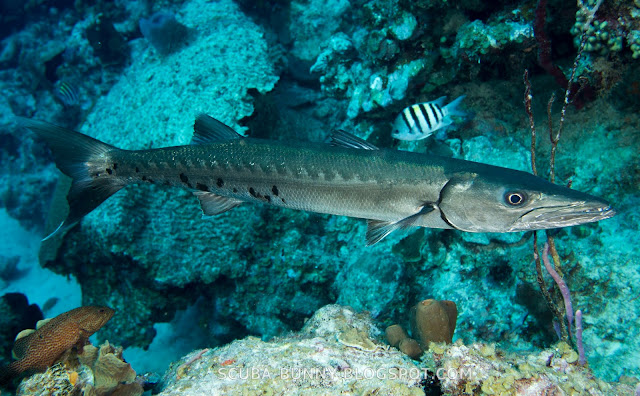 We had a good long scour along the hard pan and found some lovely little rough head blennies. The second one of which was trying to eat a piece of fishing line nearly as big as itself. Obviously never had any breakfast this morning. 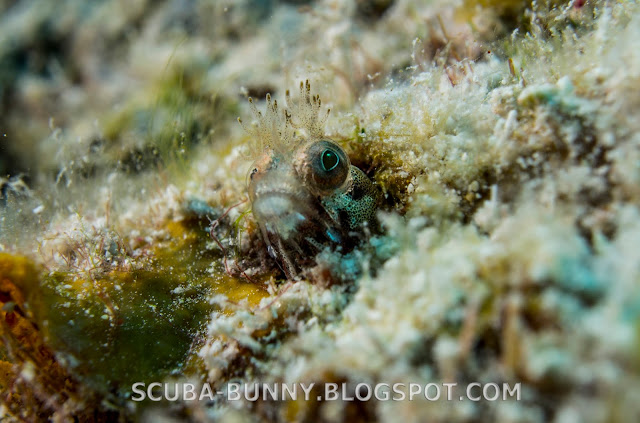 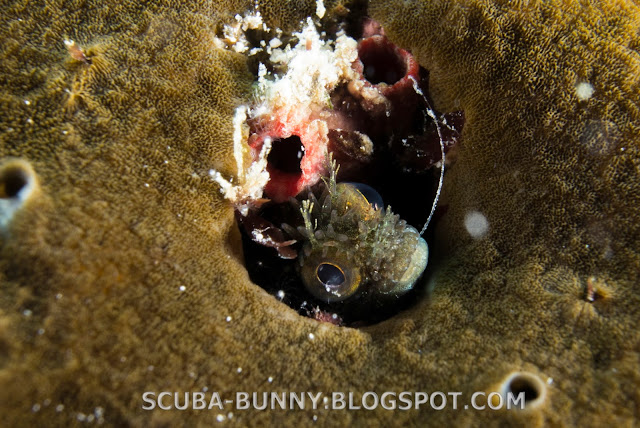 Plenty of filefish, pipefish and needlenose puffer fish were hiding out amongst the sponges and hydroids, apparently not fans of the worsening conditions. 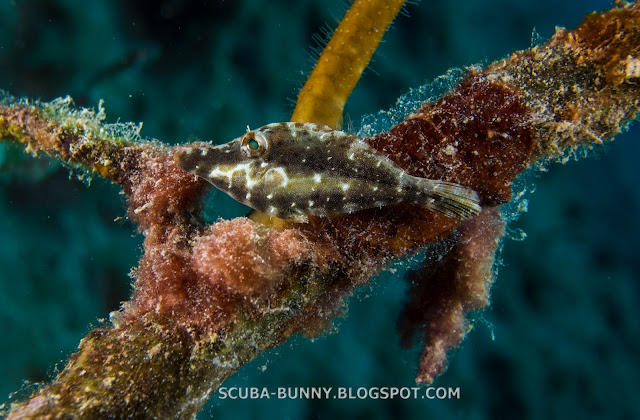 But this didn't seem to bother the juvenile orange sided gobies sitting out on the coral waiting for their turn under the camera lens....... 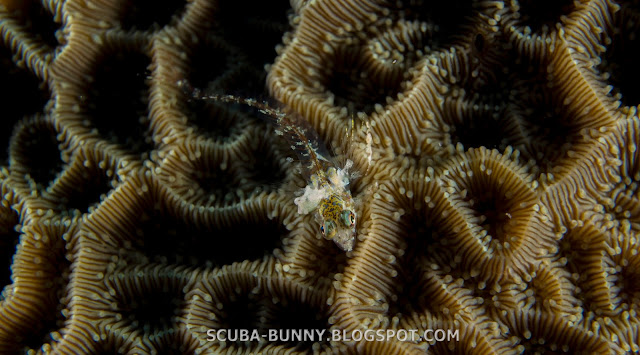 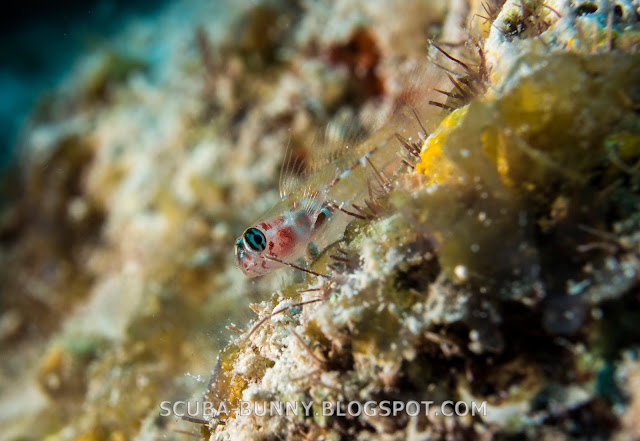 And one of the best parts of the morning? A po boy wrap with extra chili and a vanilla protein shake at the end of the dive, fresh out the kitchen from Chef Jen. Nice.

And with those immortal lyrics firmly imbedded in your brain, that makes a nice segue into the subject of this weeks photograph of the week, taken at Dreamweaver on the North Side (see how smooth that transition was?). Yet another snapshot makes it into the local rag.

Yes indeed, if you haven't picked up the local papers this week, rush out and get your copy to see the magnificence that is diving on the North Side of the island.

Or just enjoy it online if you're feeling particularly lazy.......... 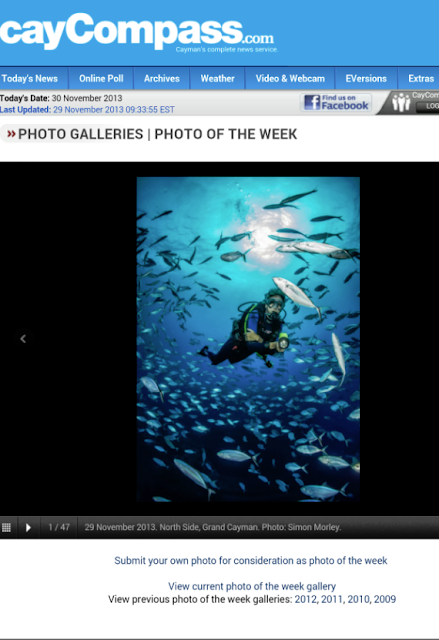 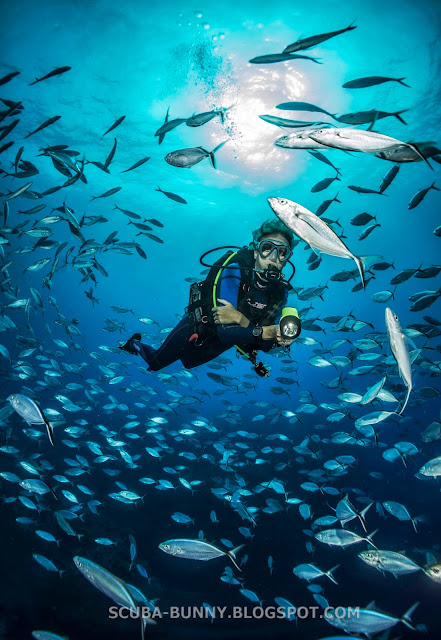 Posted by Simon Morley at 17:52 No comments: