Something you've always wanted to see but didn't know it. Angler fish mating.

Scientists had never actually seen these creatures mate in the wild, but sadly, that’s no longer case. As Katie Langin reports in Science Magazine, this unprecedented footage was captured by wildlife filmmakers Kirsten and Joachim Jakobsen, a wife and husband team who were exploring an area near the Azores on behalf of the Rebikoff-Niggeler Foundation when they came across the sexy scene. 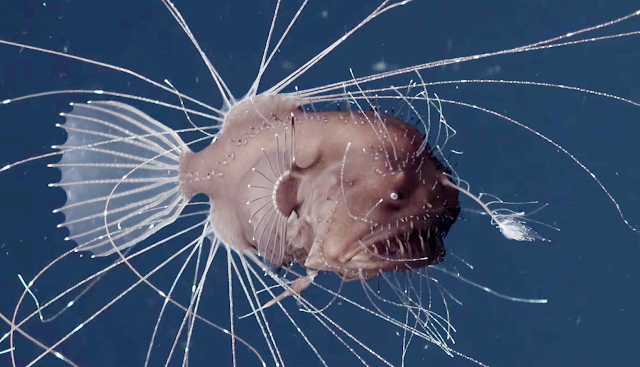 “I’ve been studying these [animals] for most of my life and I’ve never seen anything like it,” says Ted Pietsch, a deep-sea fish researcher at the University of Washington in Seattle.
Most of what we know about deep-sea anglerfish comes from dead animals pulled up in nets. Scientists have identified more than 160 species, but only a handful of videos exist—and this is the first to show a sexually united pair. “So you can see how rare and important this discovery is,” Pietsch says. “It was really a shocker for me.”


Posted by Simon Morley at 23:29 No comments: Links to this post

Midnight at the lost and found

Another sunken treasure decides to reveal itself to world again after nearly 76 years in hiding. There's so much more of the ocean to explore, preserve and conserve for future generations.

"The USS Lexington, a US aircraft carrier lost during the 1942 Battle of the Coral Sea, has been discovered by a team of civilian researchers off the north-east coast of Australia.
The Lexington was discovered on Sunday, March 4, by Vulcan Inc., a company chaired by Microsoft co-founder Paul Allen. A search team aboard the Research Vessel (R/V) Petrel found the ship—one of the United States’ first aircraft carriers—about 500 miles (800 km) from the Australian east coast, and at a depth of two miles (3 km). The ship went down in May 1942 after a four-day battle against three Japanese aircraft carriers."