Says it all really. Man's best friend is indeed a shark.


Posted by Simon Morley at 03:53 No comments: Links to this post

Had an interesting day at Lighthouse with a monumental ripping Northerly current taking centre stage, even the fish were struggling to swim, but we did have some decent viz all things considered.

But the best laugh had to be watching a lot of very fat and unfit divers with rebreathers floundering at the surface at the start of their dive, with missing weights, missing fins, being too tired, being too hot, trampling the reef and a hundred other problems.

And this was just the start of their dive. It looked like ten beached whales along the shoreline I was tempted to call Greenpeace and get them to tow them out to deeper waters! Or if I was really mean, I would have radioed for a japanese whaler to harpoon them.......

Don't get me wrong, I'm not one to knock other divers (much) but when you  listened to all their bragging and bravado before they got in the water, you'd have thought they invented rebreathers and gave birth to Jaques Cousteau.

After watching them for a while, we decided to cut out the middle man and jump right in and get down before we got crushed or accidentally mistaken for food.

The hardpan in the first 7 metres proved to be an absolute treasure trove for macro work with an absolute plethora of sailfin, roughead, secretary and orange saddled blennies along with a cornucopia of flamingo tongue cowries. 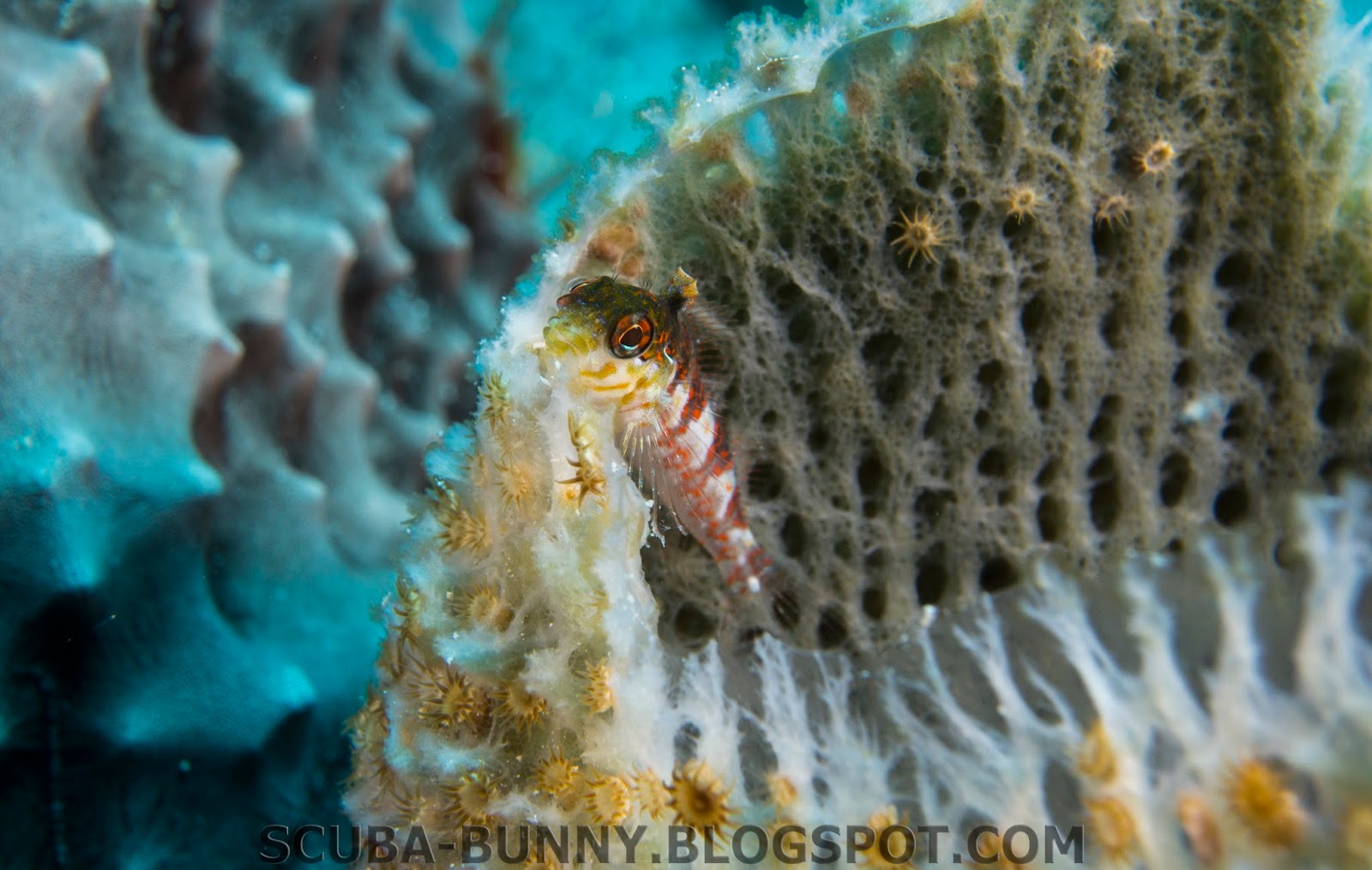 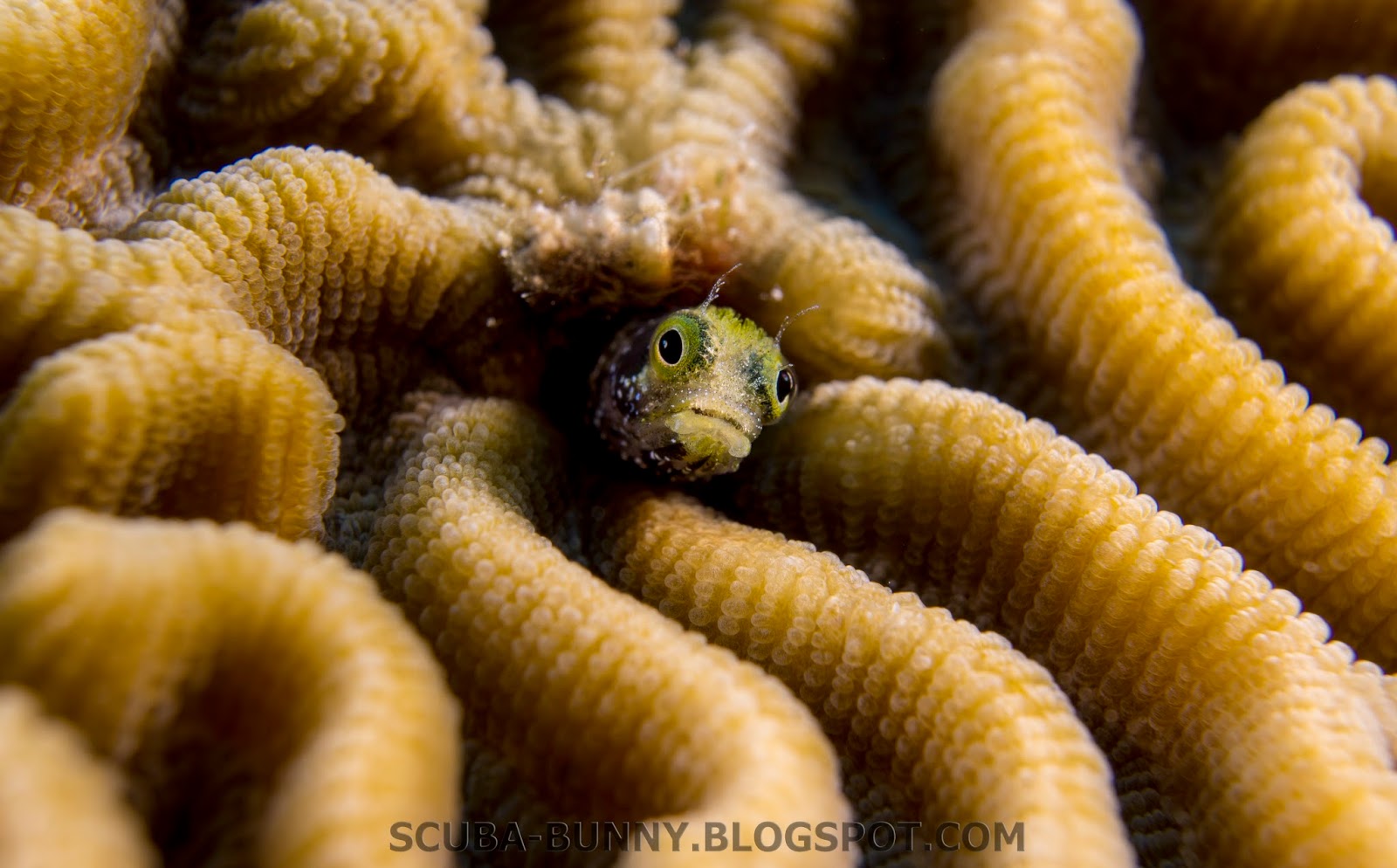 Jill had some quality time with her new camera and her even newer strobe but conditions weren't really the best for playing around with settings and fine adjustment, which is a shame but there's always another day for a dive. 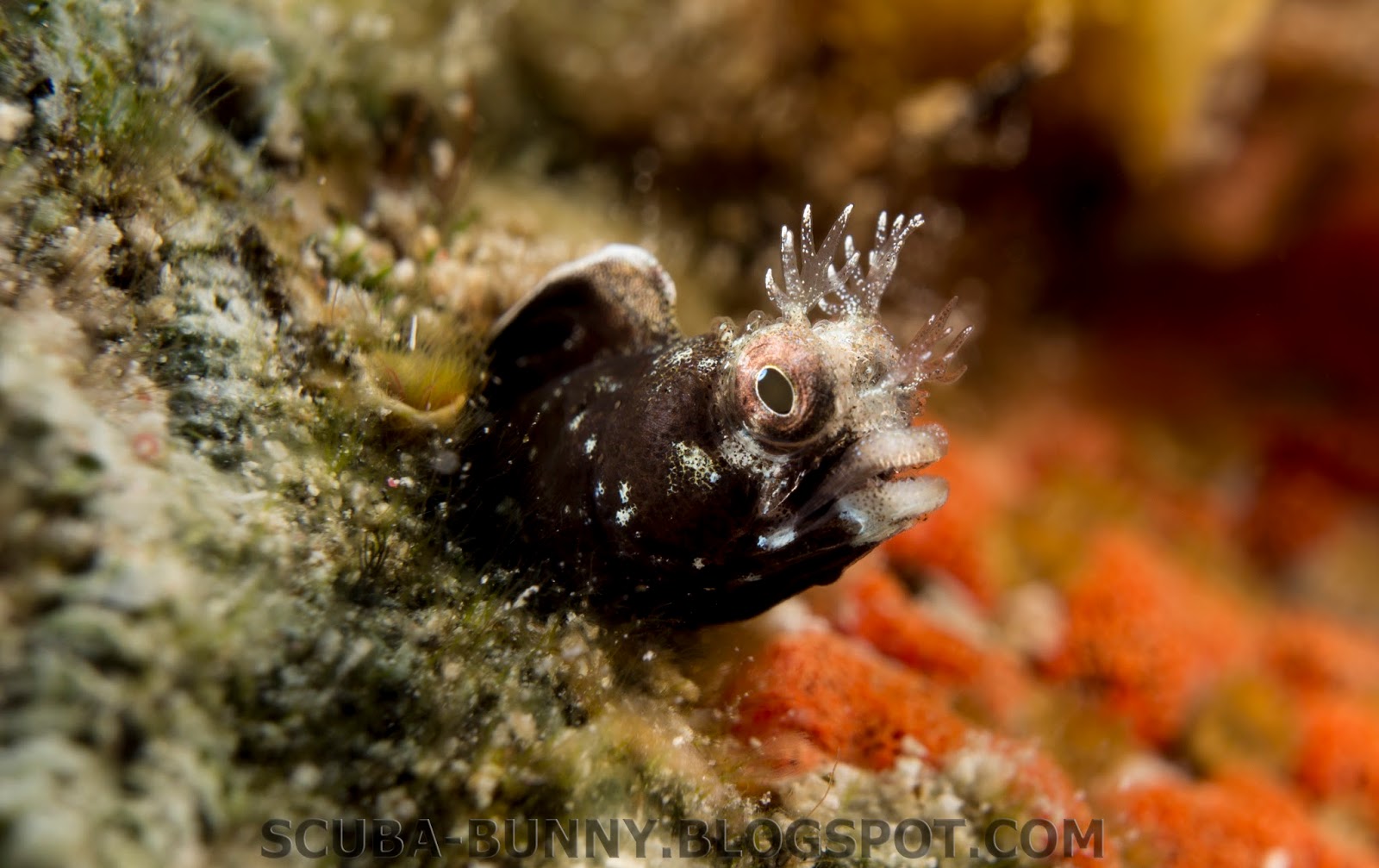 We did also get a semi-reliable report of a seahorse just off the mini wall and we did go for a look but the current was so strong, if we had stayed there for a couple of minutes we would have been washed down to South Sound. And also the SAC would have been through the roof, so not worth the effort but there were some massive groupers and snappers riding the currents and looking as though they enjoyed every minute of it.

Hiding in amongst a small coral head was a lovely little gaudy clown crab that was a bit shy but he did stick around long enough for a quick candid shot. 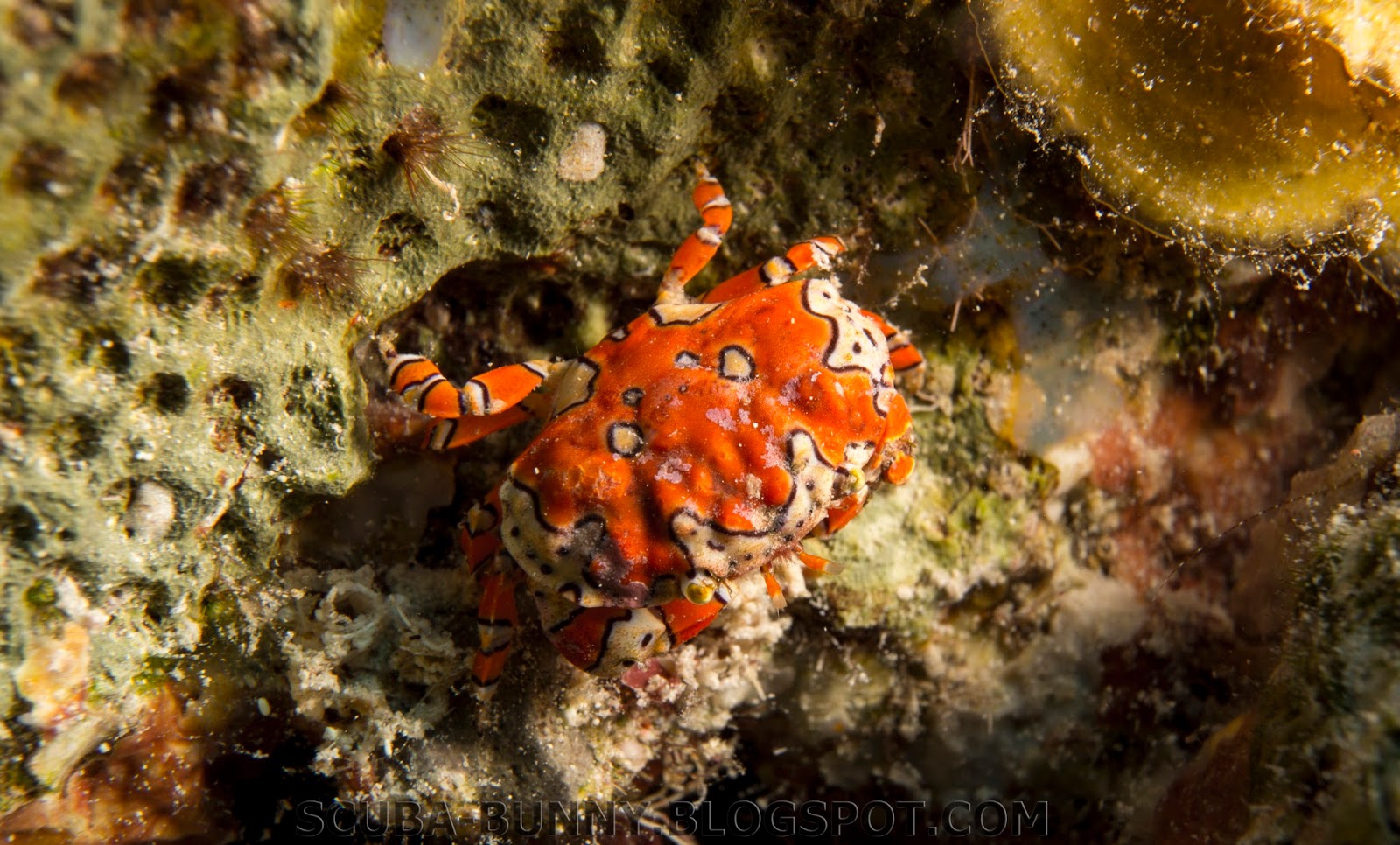 But as always the best part of the dive was catching a nice little tritonia hamnerorum on the algae towards the end of the dive. It's not a good dive unless there's a nudbranch somewhere in there and indeed there was so everyone was happy. Well I was.

And for the record, after a very short dive, the whales managed to get back onto dry land and packed up about 25 minutes before us. Who needs a rebreather? ;-)

Posted by Simon Morley at 20:40 No comments: Links to this post

Today was a strange day. If you'd blindfolded me and threw me in the water I would have said I was diving back in Scotland (minus the dry suit and cold water). Still there's no such thing as a bad dive even though it did make for trickier than usual conditions for the old camera.

With a with blowing around 10-12 knots ENE, Captain Dave took us South to try and outrun the weather with little success but it's not as if we weren't going to get wet anyway, right?

First port of call was Crusher's Wall which has some nice cuts on the top to take you out to the drop off and a nice pinnacle for some photo opportunities with the local snappers. 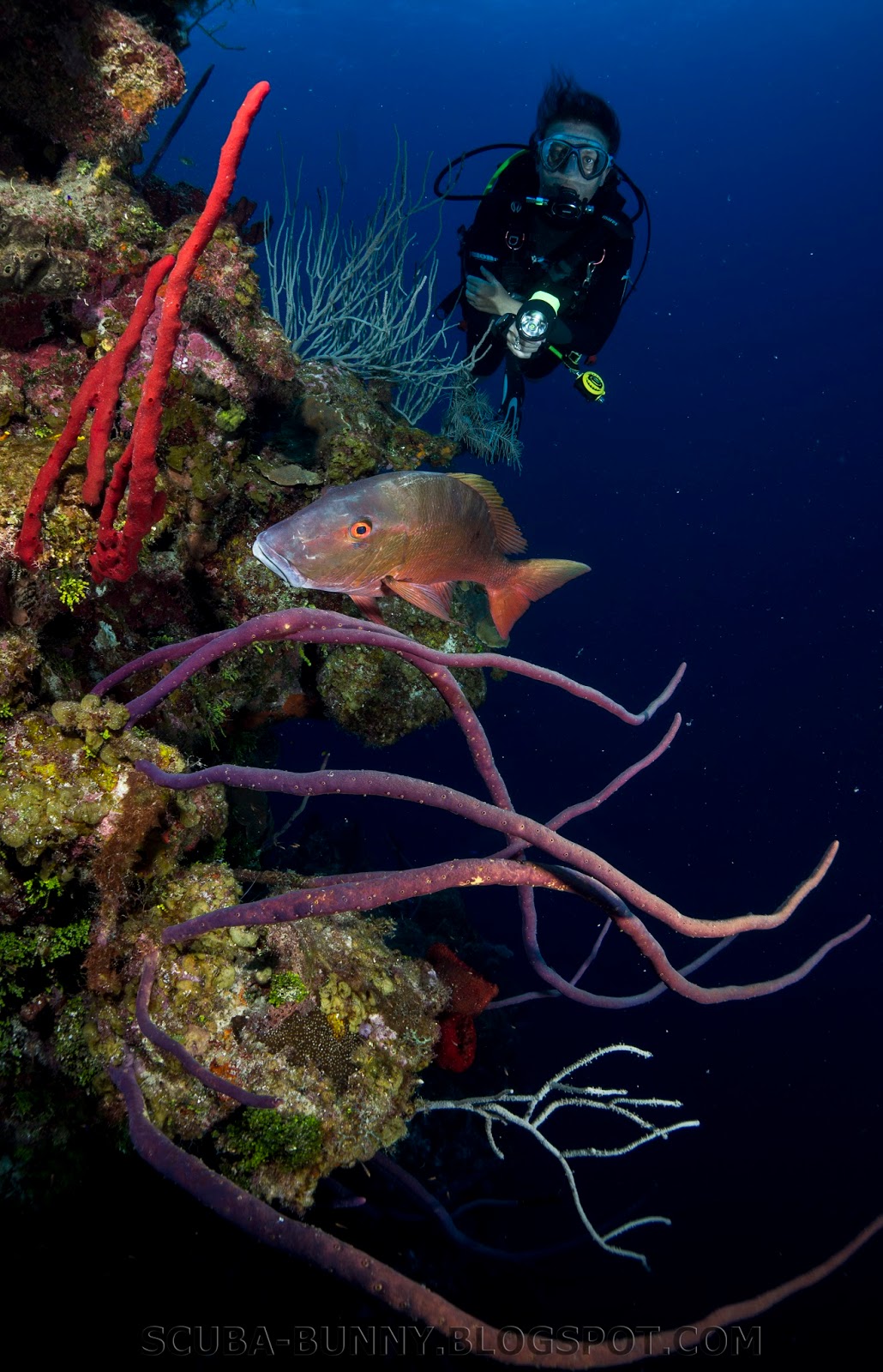 Unfortunately as soon as Dave had mentioned about nurse sharks in the pre-dive brief, that was the jinx, so there was nothing to be seen in the blue today, just the usual shoals of barracuda and triggerfish with the odd lionfish cruising around. 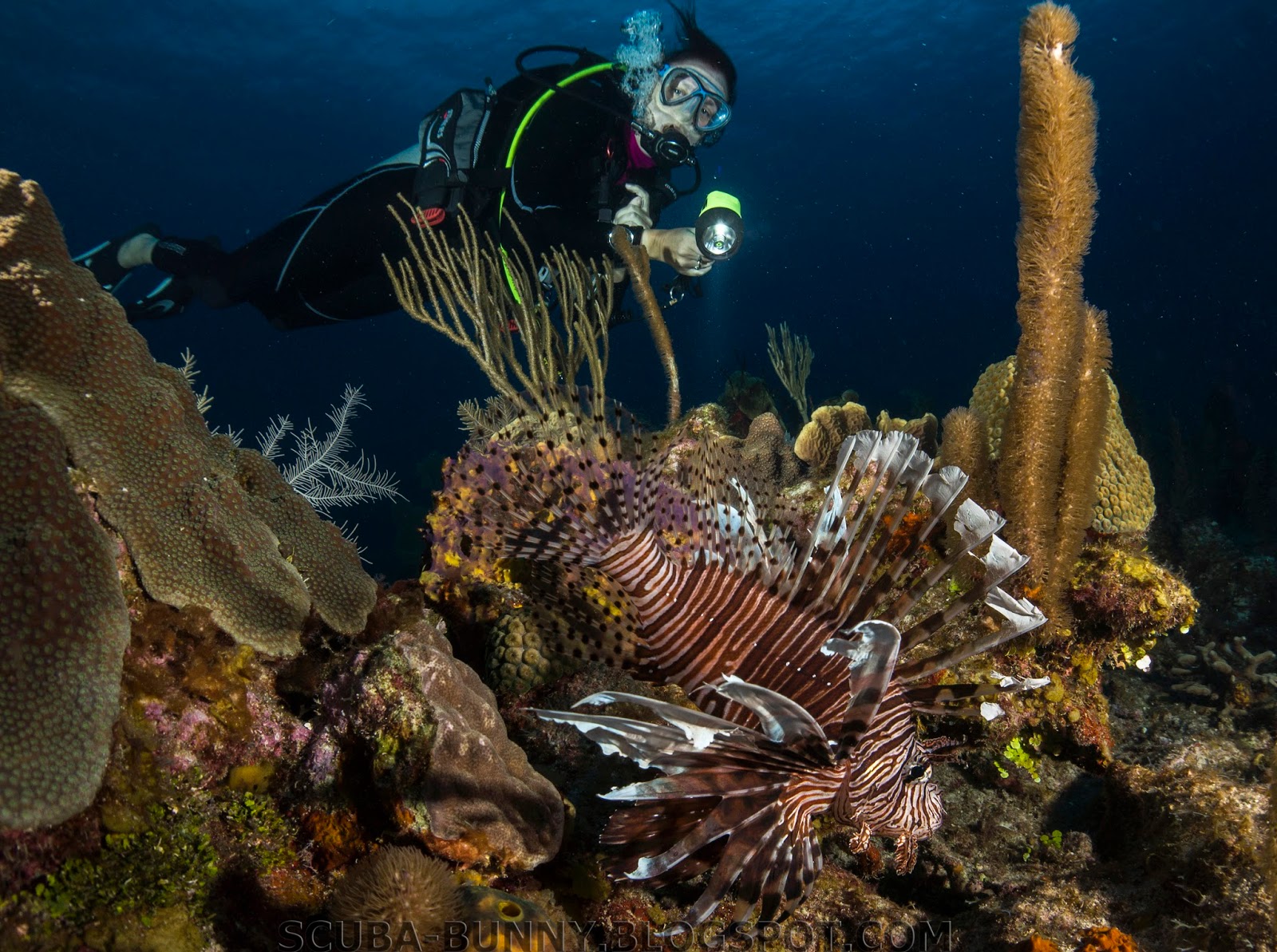 Crusher's Wall is one I'd definitely like to get back to and explore with fewer people in the water and better overhead light as there is definitely potential for some great shots to be had from the fantastic scenery, cut outs and sponges. As always with the deeper wall dives though, be sensible and keep one eye on your NDL and the other on your air.

With another round of lashing rain, not to mention and mini tornado whipping away off on the horizon we motored along to Ironshore Gardens to see what we could see. Not my most favourite of places for macro as it predominately swim throughs but you never know what you're going to find. There was a hell of a lot of lobster out and about and I nearly got run over by one of the bigger ones as it went about it business.

There were a good selection of blennies and gobies just of the mini wall and on the coral head but they were well entrenched and a real bugger to get half decent shots of. 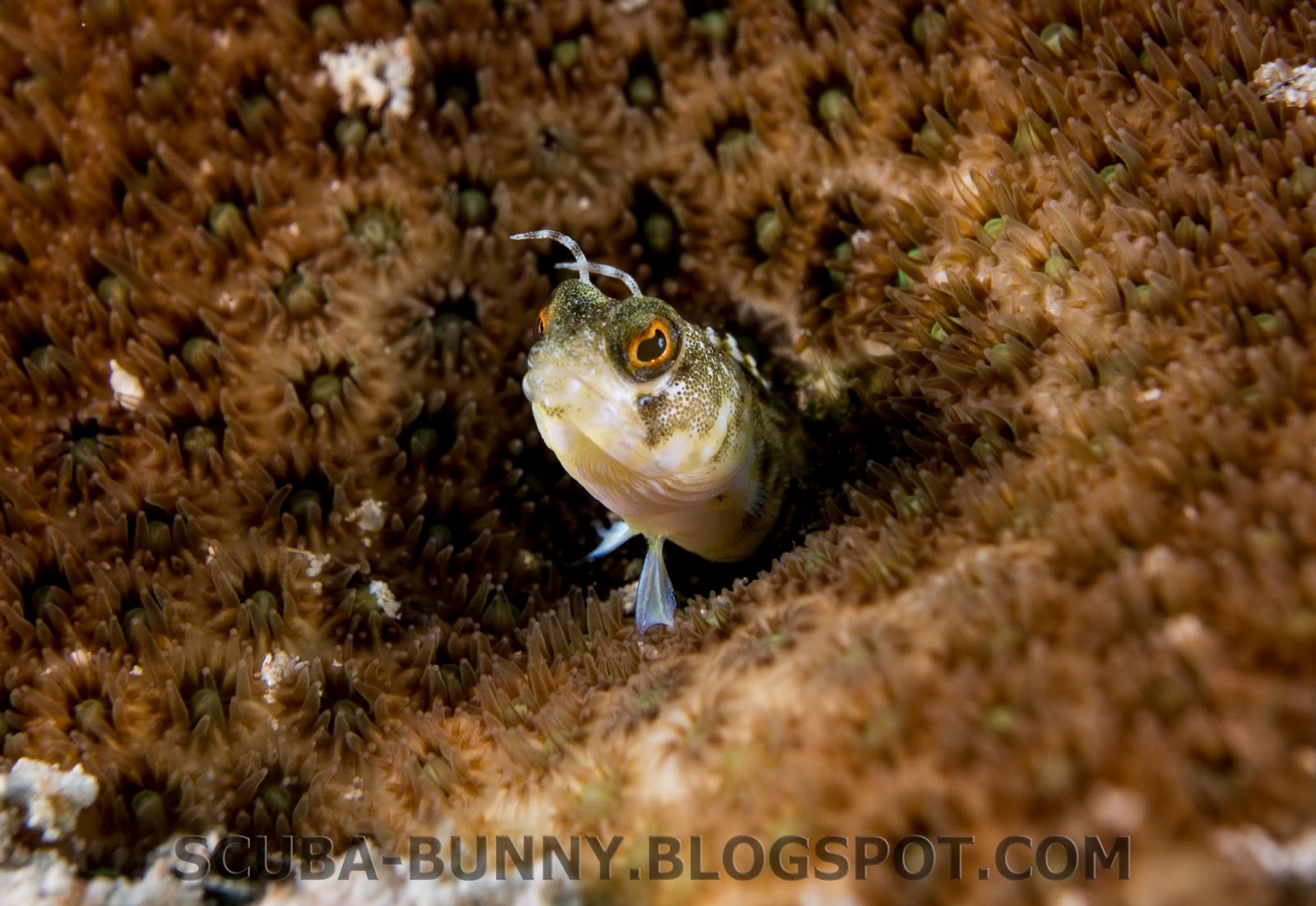 We also had a really nice selection of hamlets and damselfish hiding out amongst the staghorn coral, along with the grunts and squirrelfish seeking refuge from all the bubbles permeating the rock as the other divers wind their way through the multitude of maze like tunnels.

Towards the end of the dive I had a nice surprise find of a fringeback nudibranch heading over the sand, off to do whatever it is that nudibanchs do as well as a lovely little juvenile plumed hairy crab frantically waving it's claws at me. Reminds me of Vicky for some reason but I can't think why.......... 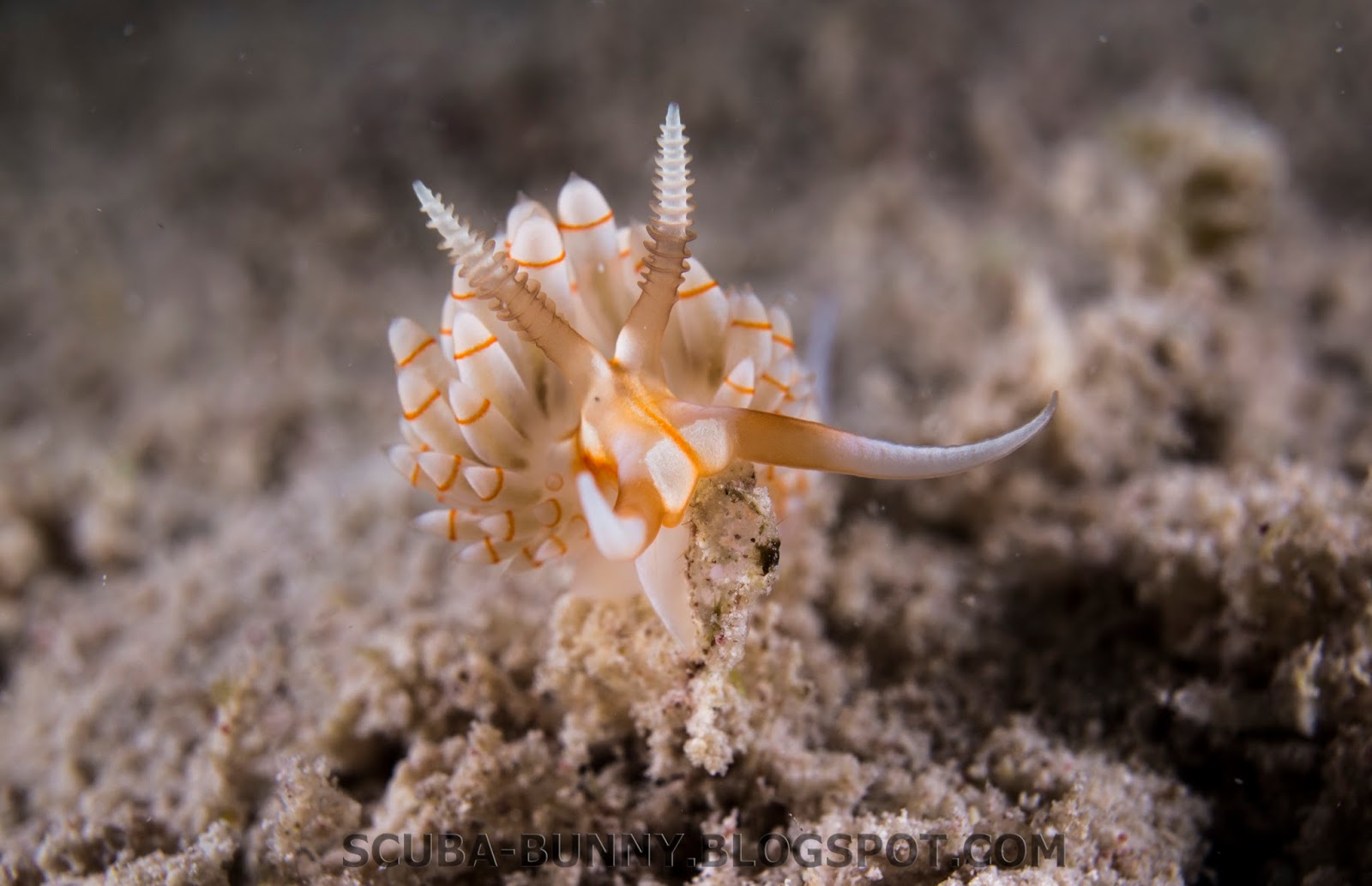 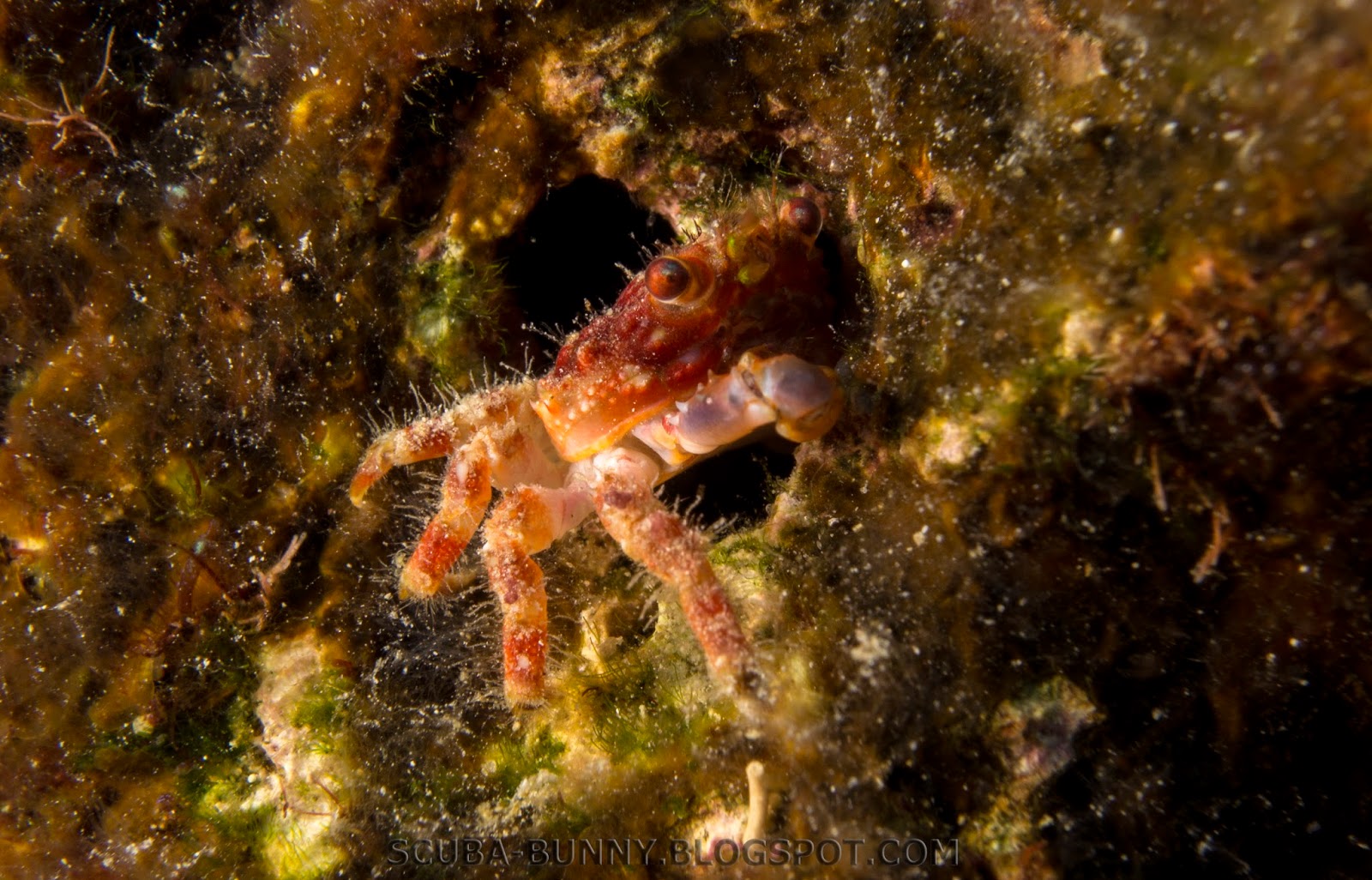 And one nice orange sponge had another big orange lump right next to it but this one happened to be a spotted scorpionfish doing a sponge impersonation. 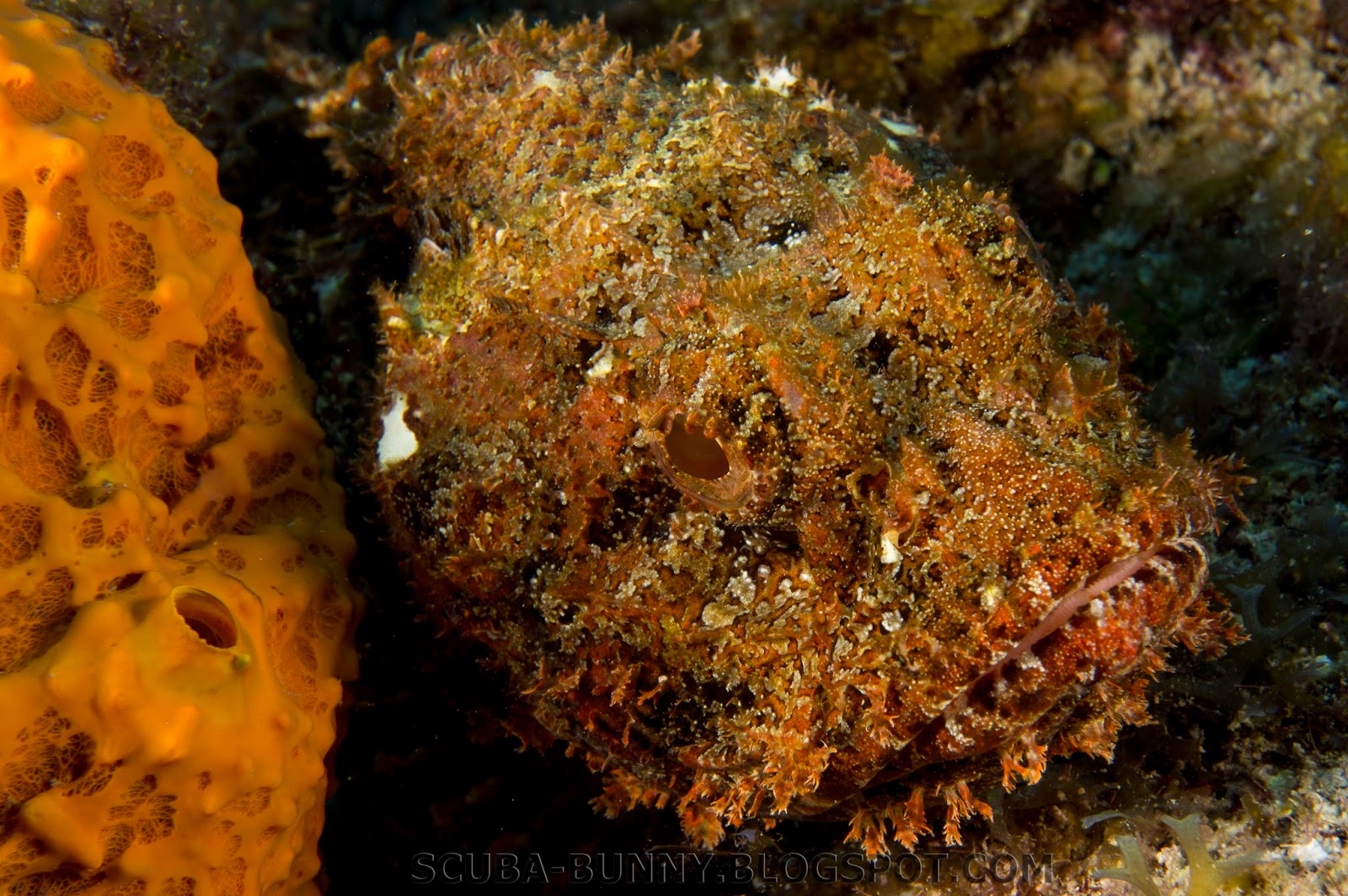 With the rain hounding us all the way back to the dock, we couldn't wait to get dried off and get a mug of ovaltine back at the ranch.


Posted by Simon Morley at 17:18 No comments: Links to this post

Now this is pretty exciting. Archeology, scuba and cave diving all rolled into one.

Inside a cave so deep and dark it's called Hoyo Negro, or Spanish for "black hole," divers are transporting a 12,000-year-old skull for 3D scanning. The skull belongs to one of the oldest and most complete skeletons ever found in the Americas. 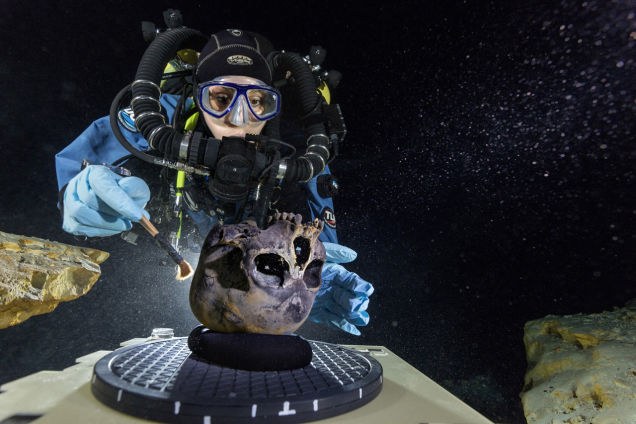 The skeleton, belonging to a 15- or 16-year-old girl whom scientists have named Naia, helps solve a long-running debate on what early Americans looked like. Naia's narrow face and prominent forehead look nothing like Native Americas, but her DNA markers prove their related ancestry. 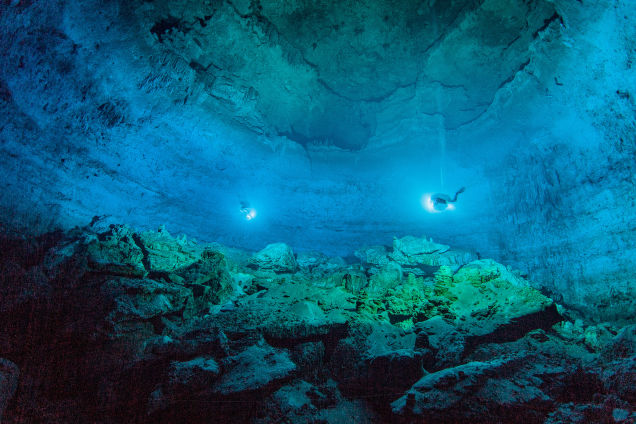 At the time of her death at the end of the ice age, the caves on the Yucatan peninsula were likely dry. Since then, rising sea levels have flooded the caves. Divers first discovered Naia's bones, along with the bones of extinct animals like saber-toothed cats and giant ground sloths, in 2007. Her bones have since been moved after unauthorized divers entered the cave. 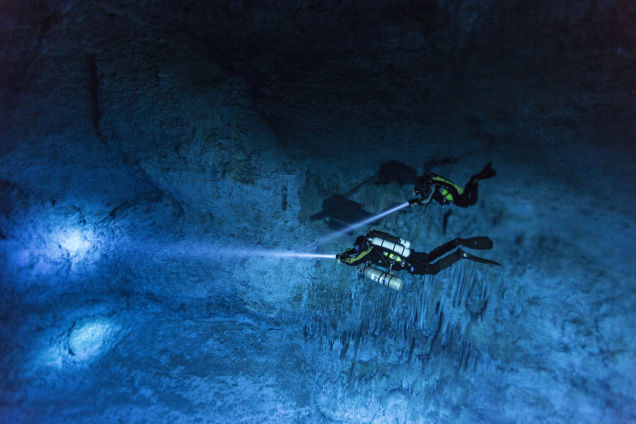 Posted by Simon Morley at 02:14 No comments: Links to this post

Measuring the minds of other creatures is a perplexing problem. One yardstick scientists use is brain size, since humans have big brains. But size doesn’t always match smarts. As is well known in electronics, anything can be miniaturized. Small brain size was the evidence once used to argue that birds were stupid—before some birds were proven intelligent enough to compose music, invent dance steps, ask questions, and do mathematics.

Octopuses have the largest brains of any invertebrate. On average the size of a walnut—as big as the brain of the famous African gray parrot, Alex, who learned to use more than one hundred spoken words meaningfully. That’s proportionally bigger than the brains of most of the largest dinosaurs.

For its color palette, the octopus uses three layers of three different types of cells near the skin’s surface. The deepest layer passively reflects background light. The topmost may contain the colors yellow, red, brown, and black. The middle layer shows an array of glittering blues, greens, and golds. But how does an octopus decide what animal to mimic, what colors to turn? Scientists have no idea, especially given that octopuses are likely colorblind.


But new evidence suggests a breathtaking possibility. Woods Hole Marine Biological Laboratory and University of Washington researchers found that the skin of the cuttlefish Sepia officinalis, a color-changing cousin of octopuses, contains gene sequences usually expressed only in the light-sensing retina of the eye. In other words, cephalopods—octopuses, cuttlefish, and squid—may be able to see with their skin.

So why is the octopus so intelligent? What is its mind for? The current scientific thinking is that the event driving the octopus toward intelligence was the loss of the ancestral shell. Losing the shell freed the octopus for mobility. Now they didn’t need to wait for food to find them; they could hunt like tigers. And while most octopuses love crab best, they hunt and eat dozens of other species—each of which demands a different hunting strategy. Each animal you hunt may demand a different skill set: Will you camouflage yourself for a stalk-and-ambush attack? Shoot through the sea for a fast chase? Or crawl out of the water to capture escaping prey?

Losing the protective shell was a trade-off. Just about anything big enough to eat an octopus will do so. Each species of predator also demands a different evasion strategy—from flashing warning coloration if your attacker is vulnerable to venom, to changing color and shape to camouflage, to fortifying the door to your home with rocks.

Posted by Simon Morley at 12:30 No comments: Links to this post

Dancing in the street

Yesterday was carnival time here on the island as it was Batabano time. Originally launched in 1983 by the Rotary Club of Grand Cayman and now in its 31st. year, Batabano (bat-a-ban-oo) is held annually during the first week of May. The festival’s name is a salute to Cayman’s turtling heritage - the word "Batabano " refers to the tracks left in the sand by sea turtles as they crawl onto the beach to nest.

As we had to work we got to watch most of it from the shop window and but I was able to  nip outside to do a quick video of the start of the parade (it was all done on the phone so apologies in advance).


We also got a couple of visitors in the shop who had a "wardrobe malfunction"  and were in desperate need of help. They were kind enough to pose for a couple of pictures for me after we got them fixed up. I don't know who was more pleased in the pictures, the girls or Martin!!


Posted by Simon Morley at 23:44 No comments: Links to this post