Well I knew we had a small window to get in the water today but the conditions were still bad (by island standards anyway). Viz was variable at 14-18 metres with a strong NNW current pushing all sorts of particulate and crap through the water (as you can see from the photos), along with a massive surge in the shallows that made macro work a near impossibility.

However there is no such thing as a bad dive (although I know 633068 would disagree with me!) so we kitted up and got wet.
With the current working against us, we pushed on out to the main wall and turned right to get some shots at one of my favourite little nooks, accompanied by our usual escort of snappers.
And we also had loads of turtles out sculling out on the main wall and the mini wall as well. You couldn't kick a fin without nearly hitting a turtle! I would have taken some video but I was having way too much fun getting some stills.
We drifted back down the main wall at around 32 before rounding the saddle for a final look into the blue. Not that there was much out there at the time but you never know what you might see.
We headed back to shallows and caught up with a nice big trumpet fish hanging around waiting to be photographed. Unfortunately I still had my wide angle on but you use what you got.
After a swap of cylinders and a quick surface interval we got back in and headed for the mini wall. Almost straight away I found a nice little bristle worm which I managed to get a shot of despite the severe buffeting from the surge.
Thank goodness for digital cameras these days. I would have killed a roll of 35mm years ago just to get a single decent shot!

We had a couple more turtles cruise by as well a some massive shoals of grunts and sweetlips not to mention some epic sized hogfish. Peacock flounders were plentiful as well as being their usual belligerent selves when it comes to getting a picture taken.
Checking around the sandy depressions at around 4 metres we found some lovely little lettuce leaf slugs as well. I love these things.
With the surge getting worse and the bottom time fast approaching, we decided to call it a day and head on back to shore. The weather gets worse for the next few days but supposed to settle down for Tuesday so hopefully the crappy weather will settle down and we'll be in the water again come New Years Day.

Until then, don't drink and dive (unless you like water with your whisky.....)


Posted by Simon Morley at 21:13 No comments: Links to this post

True facts about the Angler Fish

Ok, not actually true facts but pretty damn funny all the same!  I'm sure someone I know invented an angler fish dance as well.....


Posted by Simon Morley at 18:51 No comments: Links to this post

Rockin Around the Christmas Tree

We got a small window in the weather today which allowed us to get in the water for some great diving. We only did the one dive so we kept the bottom time to 100 minutes.

Given that it's boxing day, festive time and all that jazz, it's fitting that the place was covered in all manner of christmas tree worms, with some really nice colours, some of which I'd never seen before.


OK, festivities over, back to normal. Unfortunately there was no big stuff mooching around this morning as it was still relatively dark and it was a bit on the chilly side (27 C), so they were probably still in their beds having a morning coffee.

There was some nice big lobsters scuttling around the mini wall so they were more than happy to stop for a pose and a wave of their antennae to see us on our way. There was one or two morays around the corals as well but they were a bit skittish this morning.
There were some nice big parrotfish and wrasse hanging out in the sand along with the garden eels, but we didn't head that way as I spotted something even better hiding under some anemone. It was a really nice diamond blennie. And the little bugger did not want to sit still at all.

I got him in the end though, through patience, endurance and sheer bloody mindedness! Well worth it though as you don't see that many, so that made the dive for me.
We had a slight Northerly current pushing back down the coast so we were more than happy to drift along with the snapper, groupers, soapfish and squirrelfish.
And as always the end of the dive brings the obligatory additional bonus. In this case it was the fastest lettuce leaf slug I'd ever seen. i would have taken some video but I wouldn't have been able to track it quick enough. This thing was tearing across the sand like a race car. Maybe it was popping down to the corner shop to get the last pint of milk, who knows.
The weather is forecast to turn pants again later today and stay that way for several days, but if we get lucky then we'll be jumping in again this week and hopefully do the traditional new years day dive weather permitting.

<a href="http://www.hypersmash.com">HyperSmash.com</a>
Posted by Simon Morley at 18:26 No comments: Links to this post

Ok, that's a complete lie, it's not a white christmas here, it's currently 30 C and blazing sunshine.

It's been blowing 17-18 knots here over the last 5 days but it is starting to settle down so the obligatory boxing day diving shall be happening. Which is a good thing as we will need to burn off all the nasty horrible over indulgent foods we'll be having tomorrow!

To everyone out there, whether you are celebrating or not, or a diver or not, enjoy yourself and dive responsibly over the festive period. Slange var!! 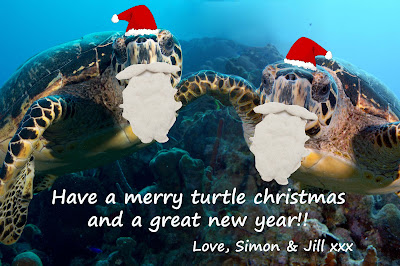 Posted by Simon Morley at 13:09 No comments: Links to this post

Well if you haven't picked up the January 2013 edition of DIVER magazine from your local newsagent, then rush out and buy it now.

Not only for the equipment reviews but because I pop up in it again, which was a nice surprise and a little unexpected.

Not a full article mind you, they will be coming soon as I have three of them nearly done and ready to go. 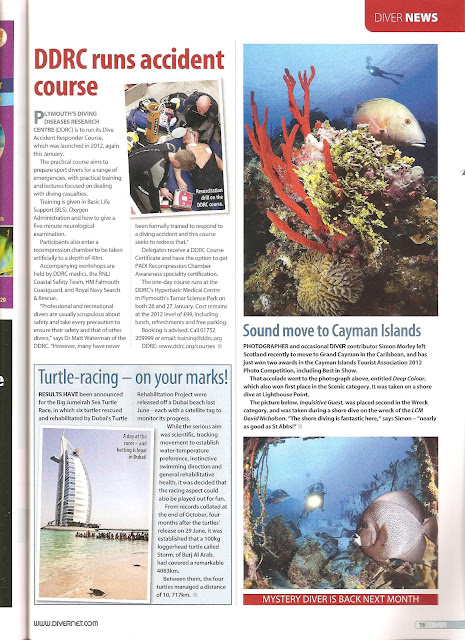 Posted by Simon Morley at 16:43 No comments: Links to this post

Due to various injuries and illnesses, diving for the week has been postponed. Normal service shall be resumed next week. Many apologies for the delay.

In the meantime please enjoy the brief interlude.


Posted by Simon Morley at 13:25 No comments: Links to this post

Song of the Kittiwake

After months on the island we finally had the time to arrange a trip to the Kittiwake. Ok so it doesn't have the history or prestige of something like the Kronpinz Wilhelm, Thistlegorm, Yongala or Britannic but it's still a nice dive to do and makes for some nice atmospheric shots.
We got really lucky as we were the only boat out and only had 8 divers so we got the whole place to ourselves and on top of that we had some really good viz and light penetration too. Bonus.
Rules dictate that if you have never dived the site before, you must be guided. Not that it's a difficult wreck to traverse by any stretch of the imagination but you need to remember that the majority of divers are normally visiting tourists out for a jolly as opposed to die hard wreckies.
Seeing as the mob from O.F. were running the dive, big Kev pretty much let us disappear and do our own thing anyway, knowing our experience and the amount of wrecks we've been in over the years. Which worked out well as there's nothing worse than trying to get that perfect wide angle shot when a bicycle kicking tourist invades the frame!
The Kittiwake is still a very young wreck which I think will come into it's own over the next 20-30 years. Marine life and growth will take time to get properly established but there's still the odd barracuda or ray to be seen on the wreck or the occasional shoal of passing jack.
The heads (or bathrooms for the land lubbers out there) are one of the may excellent places to get some shots as the mirrors on the wall make for some interesting opportunities as well as the engine room and stern. Pretty much the entire length of the wreck is photogenic!
So if you hit the island and want a very easy and very nice dive to get some pictures, the Kittiwake is ideal.I think we'll probably get a chance to get there again in a few months to get some filler shots.


Posted by Simon Morley at 19:22 No comments: Links to this post