Amazing slow-mo footage of how fish feed, particularly the sling jaw wrasse and the stone fish! 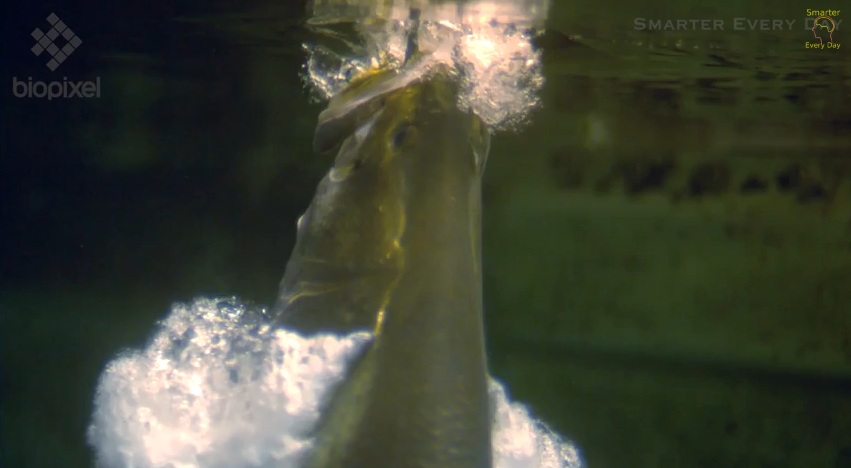 Posted by Simon Morley at 12:39 No comments: Links to this post

Ok, so this sounds like an interesting concept, certainly from a dive centre perspective. At least there'll be no more lying about your air consumption to the dive guide. The worrying thing though is it has it's own app store. There better not be any facebooking or twittering going on during the dives!! 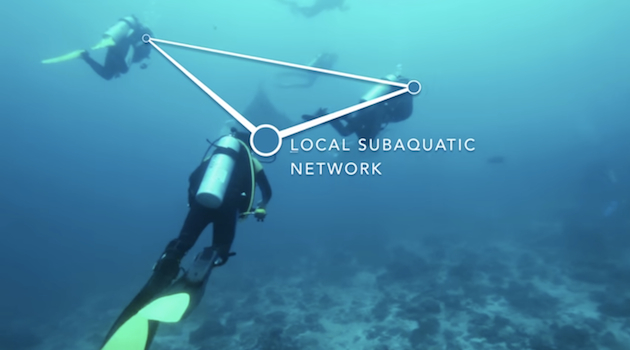 "With the Aqwary Smart Console it is now easier than ever for divers to connect, and share information about their air supply, location, and more - on a local subaquatic network. Our underwater network is powered by ultrasonic sound, and supports up to 70 divers within 100m range."

Posted by Simon Morley at 13:28 No comments: Links to this post

Night Time Is The Right Time

So what's something we haven't done for a good little while now ? You've guessed it, a night dive. It was time to rectify that little oversight with a trip up to the North West in the late afternoon to get a pre and post sunset dive in and see what we can see.

Surprisingly enough, despite the late hour of arrival, the site was still jumping, with divers getting in and out of the water which was most odd for the hour. But we got in and headed for our private little secluded spot on the main wall. Which happened to be crawling with turtles as it happens, along with their escorts of french and queen angelfish. Magnificent.

Whilst we were out there, we were nearly run over by a rampaging herd of jacks. Inconsiderate. No indication, no right of way, nothing. Could have been nasty. And I didn't even get their license plate number!

There was a slight Northerly current and the viz was sitting at around 18 - 20 metres but nothing out of the ordinary as far as the dive was concerned, just lots of lovely scenery and marine life to enjoy. Along with our faithful minions as always, of course. 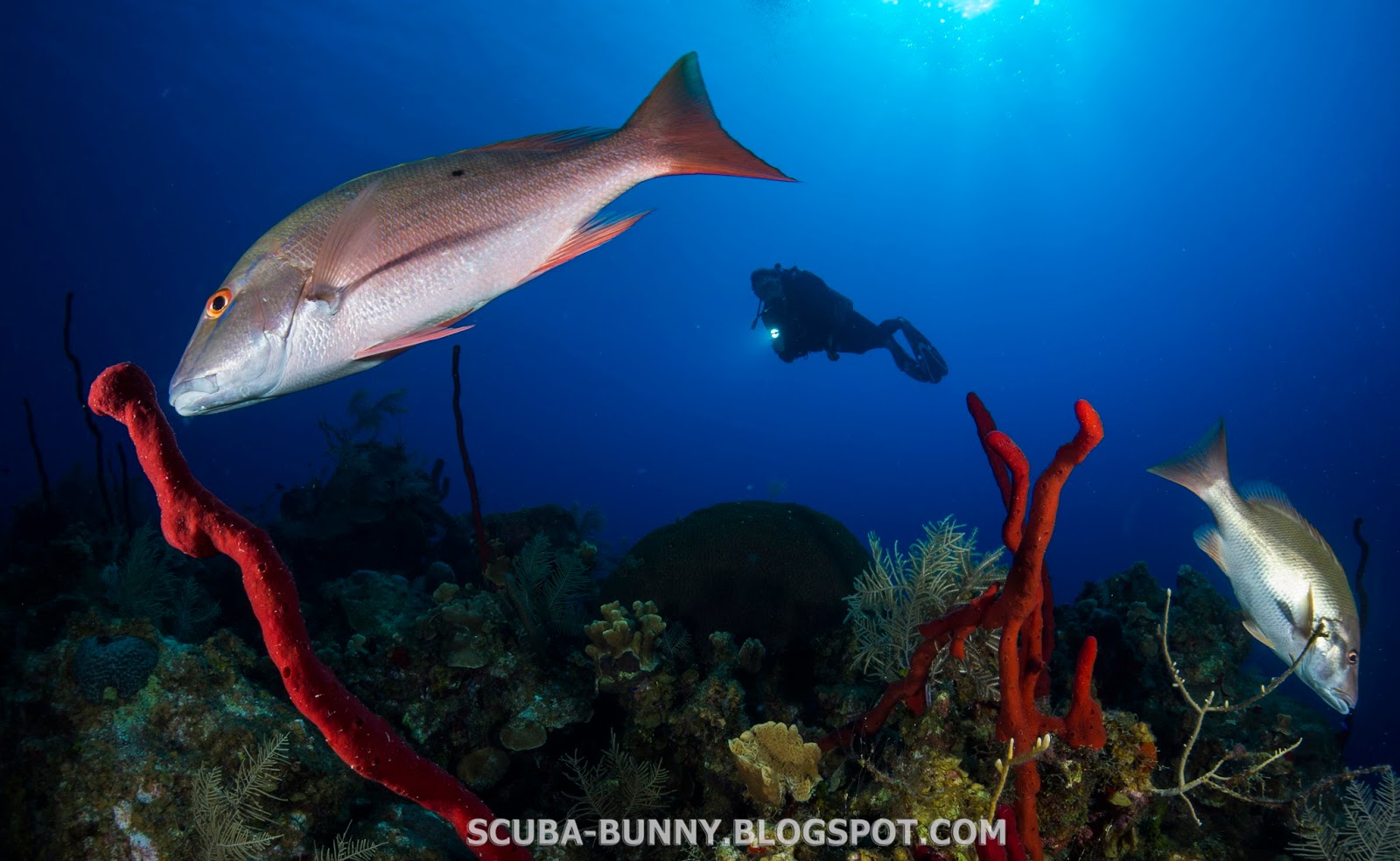 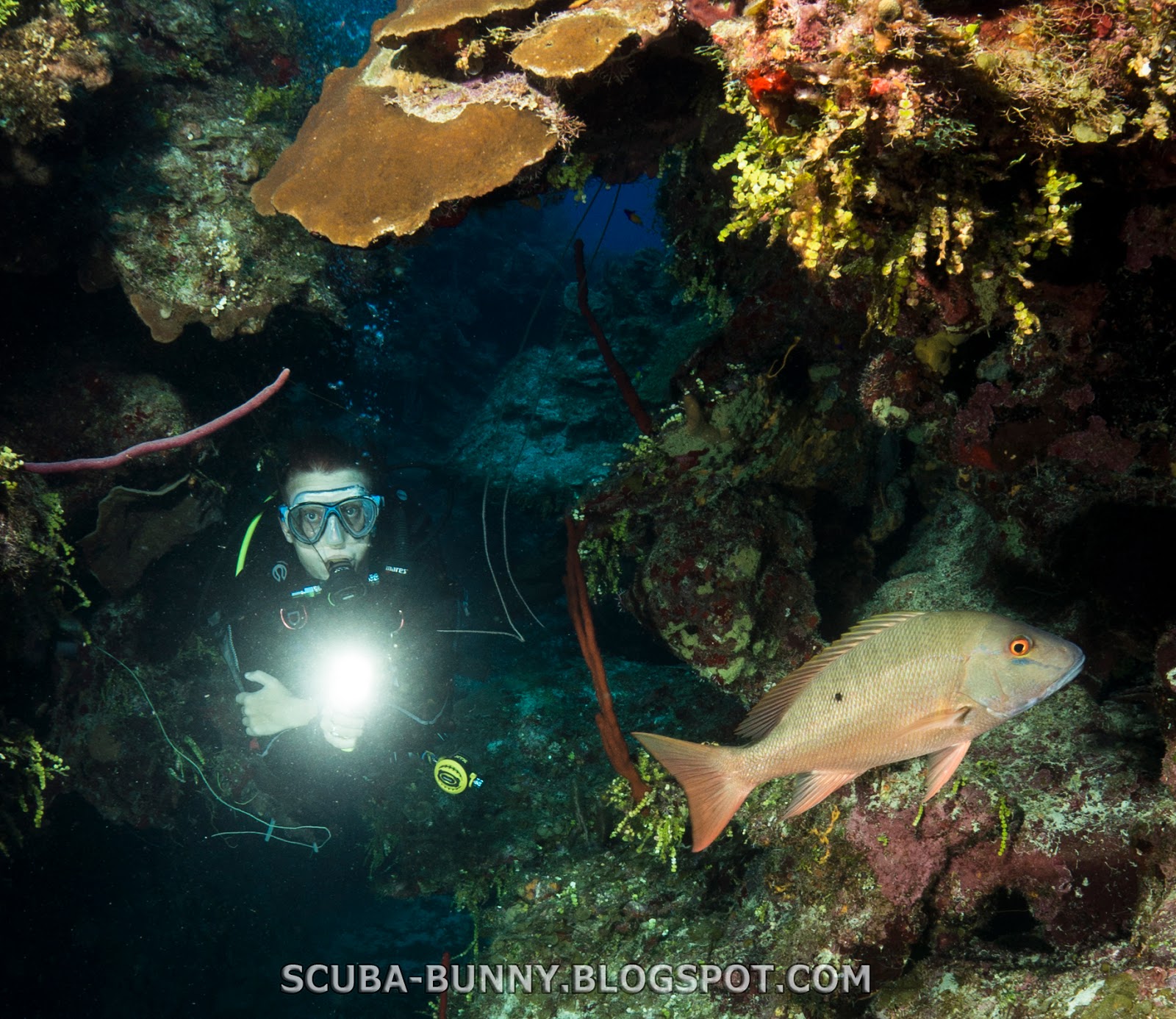 We had a good old time with our fishy friends but with our NDL fast approaching, it was time say goodbye to the deep and switch lenses for some night time action after a short interlude. 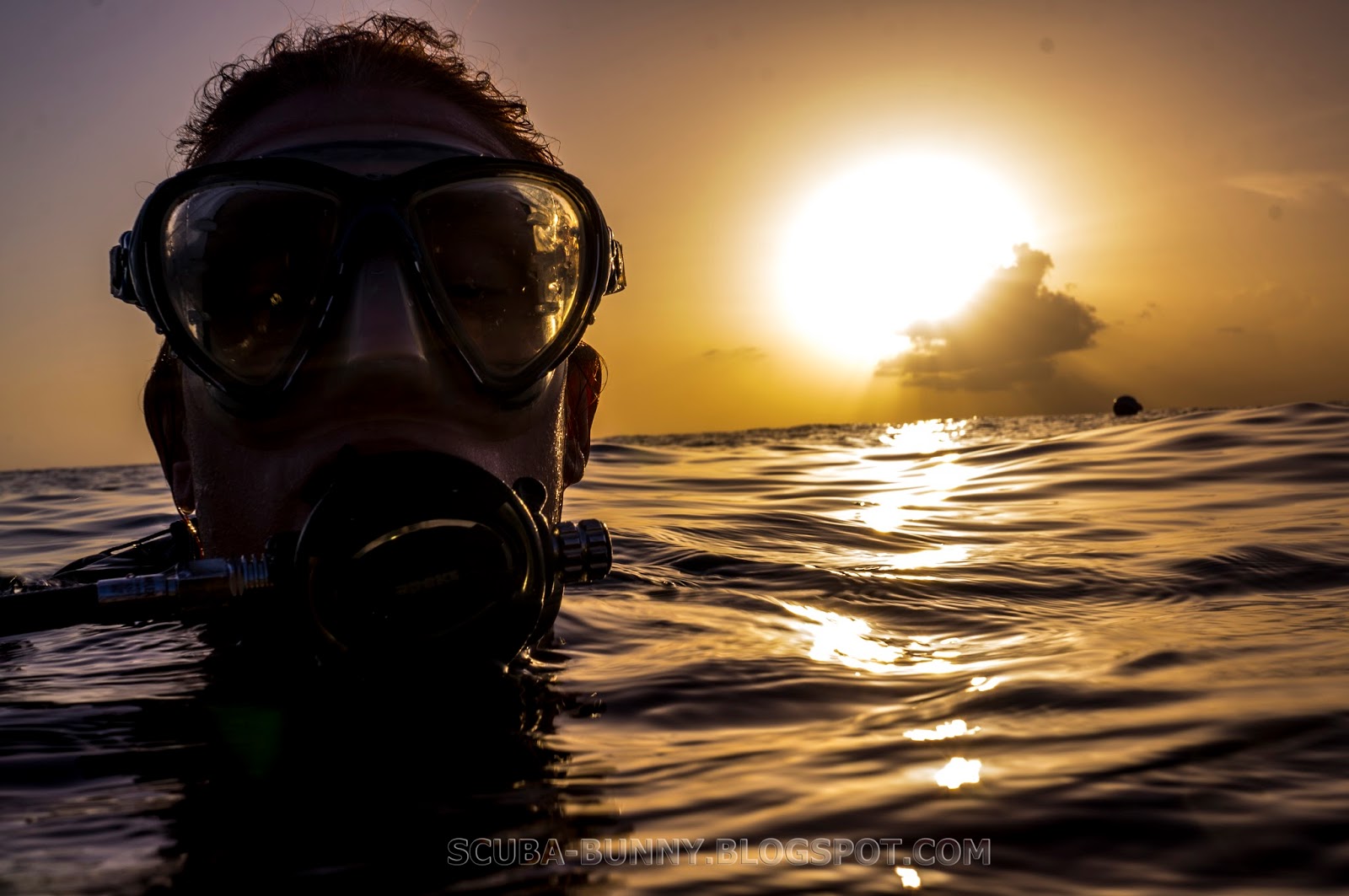 Straight away we were immediately greeted with a lovely little gaudy clown crab out in the open and scuttling his merry way across the hard pan with an added bonus of an elysia crispata right next door to him. Maybe there was some sort of assignation going on, we'll never know the truth........ 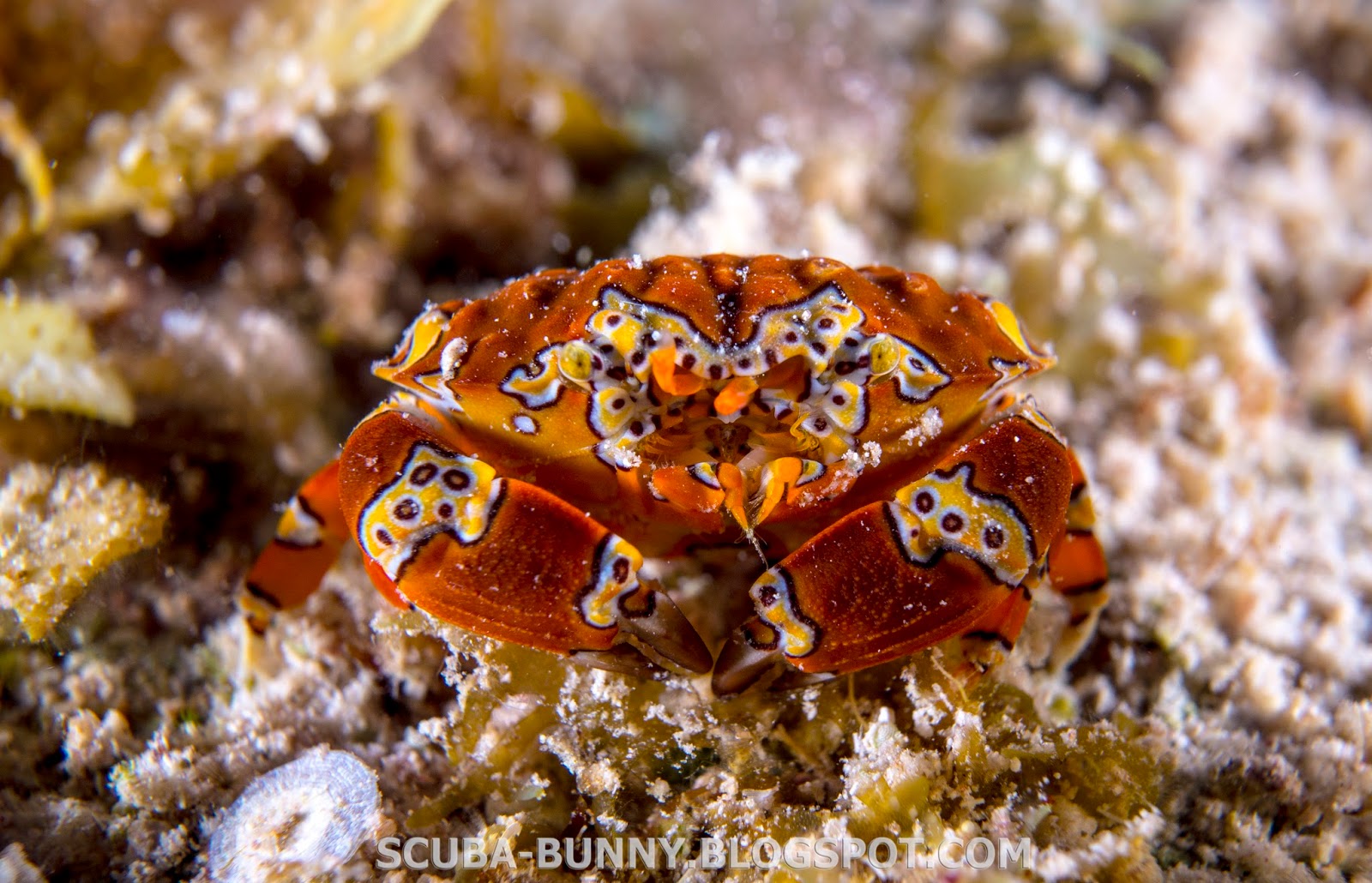 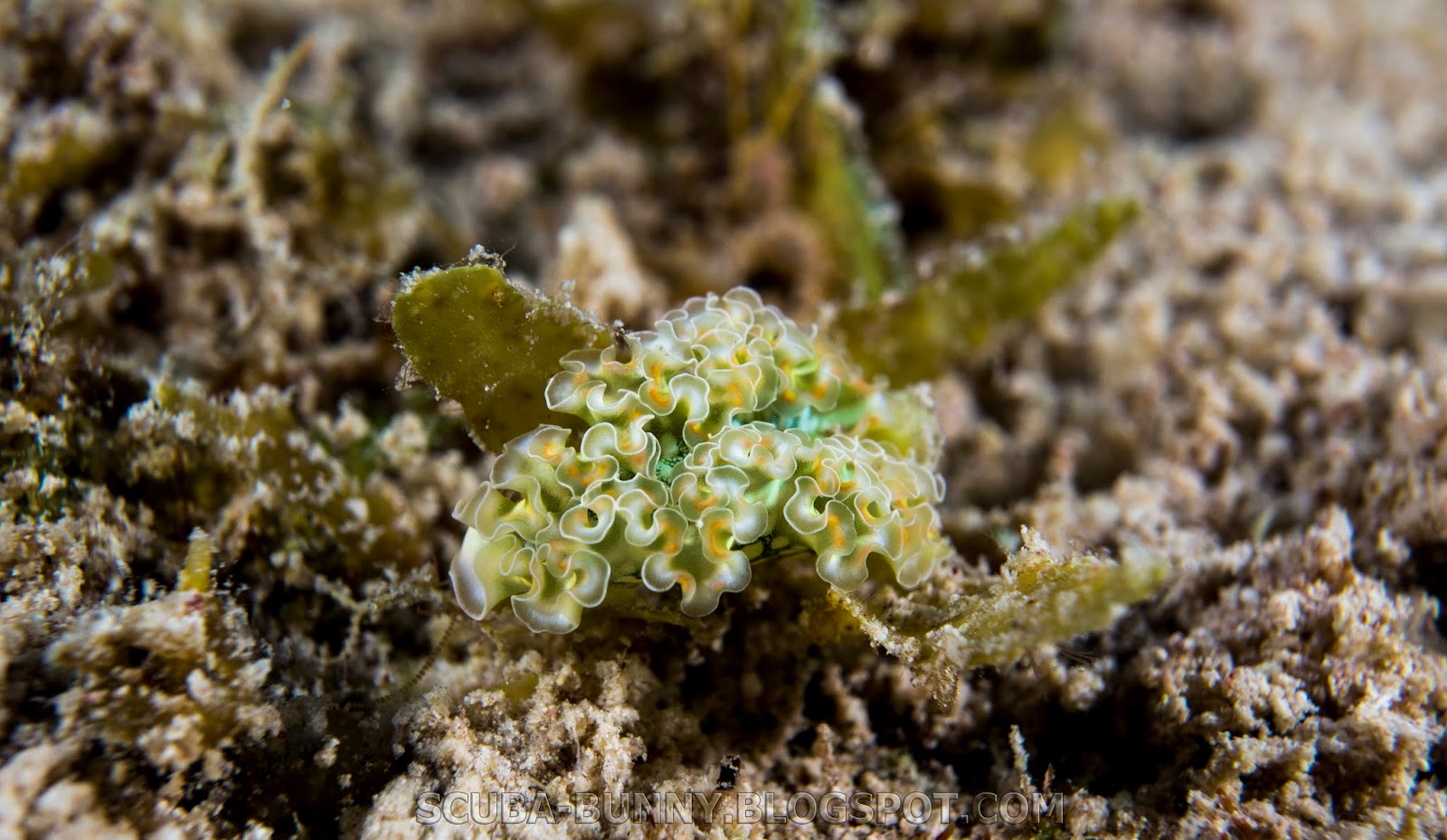 We did a scour along the top of the mini wall and off to the left where the last reported sighting of our seahorse friend was made, but alas it was all for naught.

Still, there was more than enough little critters to keep me more than happy. And when I say little, I really do mean little. A tiny juvenile decorator crab and then another miniscule crab hidden in a tiny crack in a coral head, I have no idea what it may be as it's way too small for me to identify but if anyone out there would like to contribute, please let me know. I'd hazard a guess at maybe a sand dollar crab maybe? 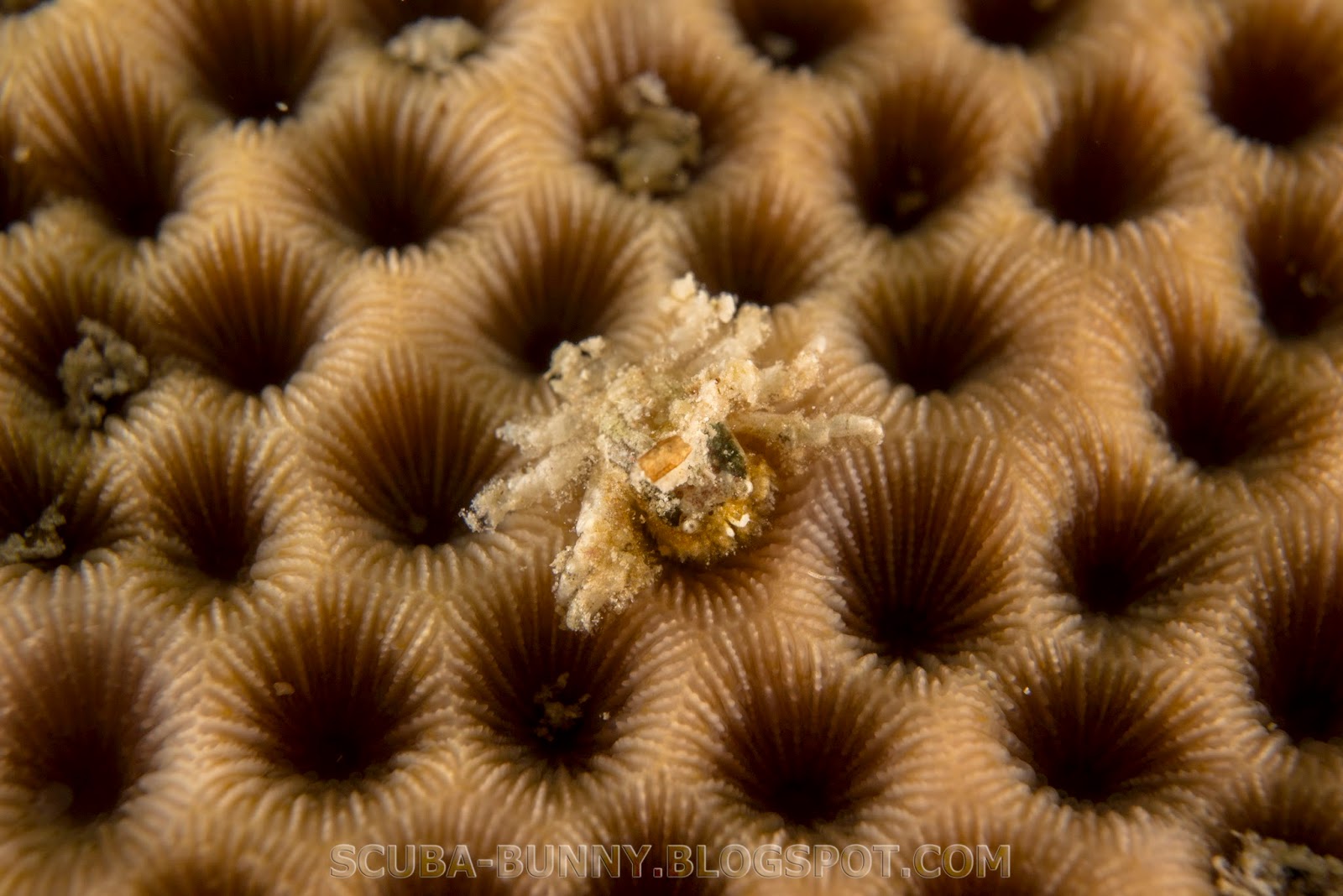 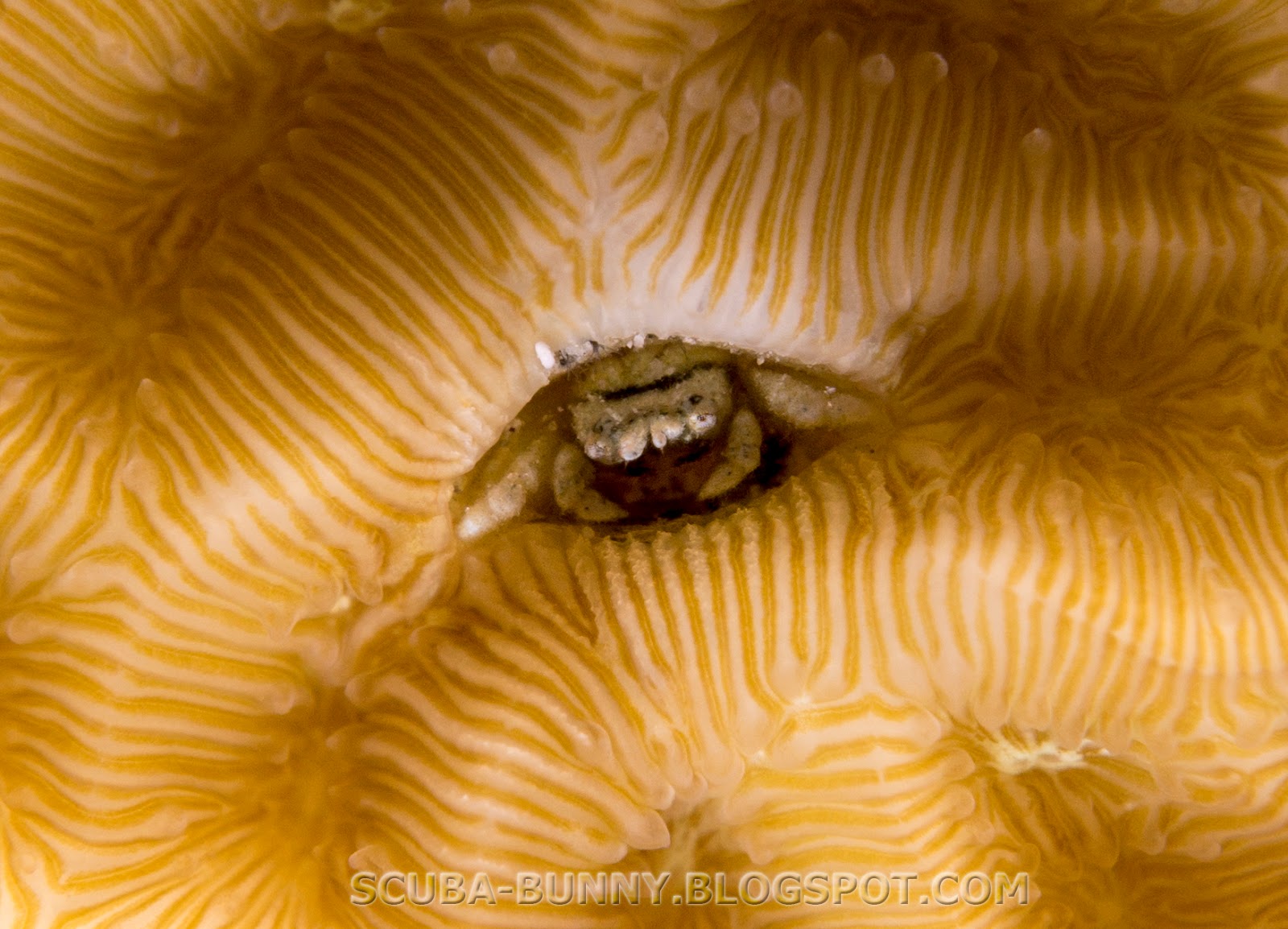 After a good long scour along the shallows, the  highlight of the evening made an appearance in the forms of a longhorn nudi quickly followed by a fringeback nudi in rapid succession which was a nice double whammy to round off the end of the dive before we had to start heading back to shore. 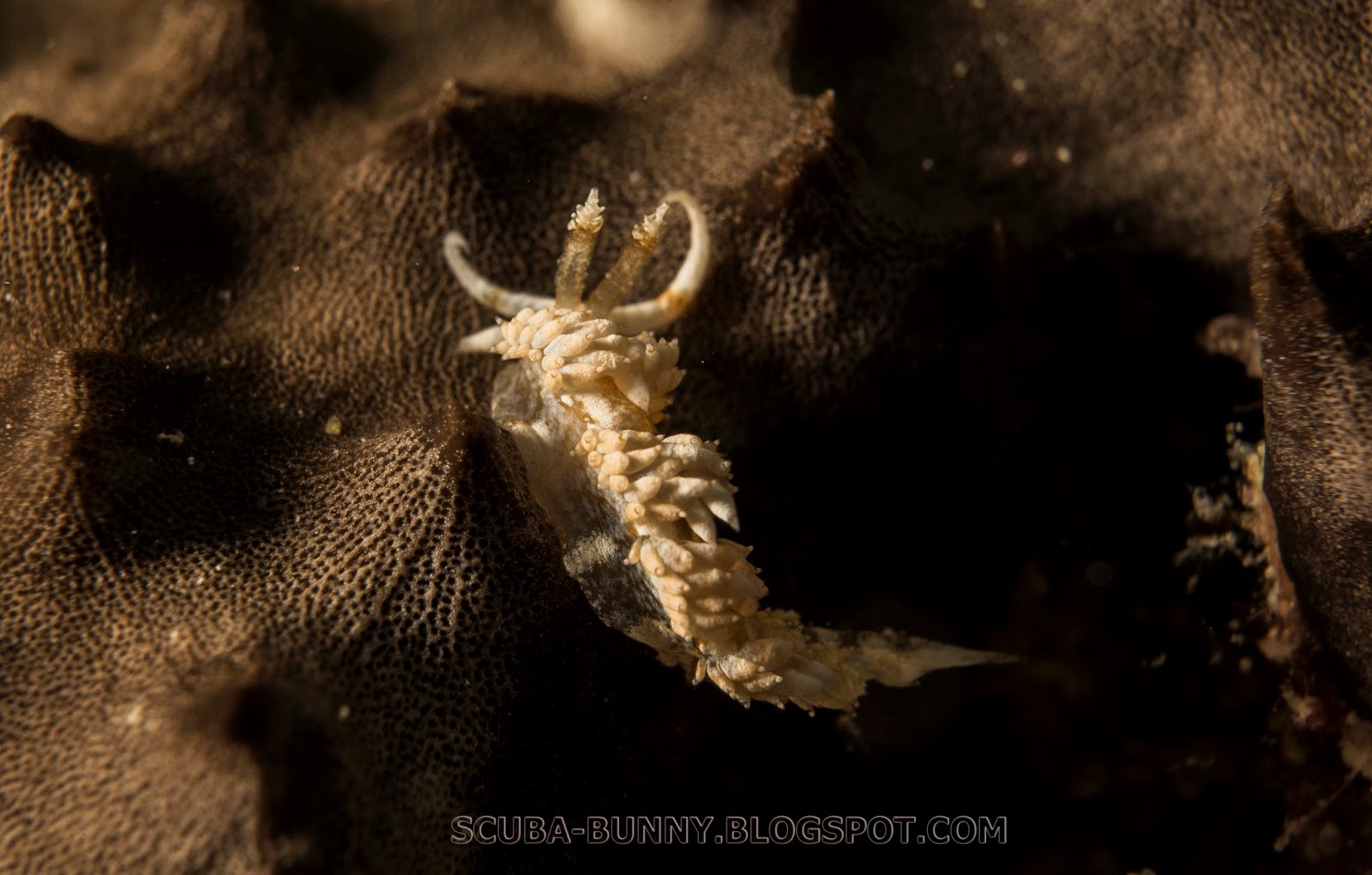 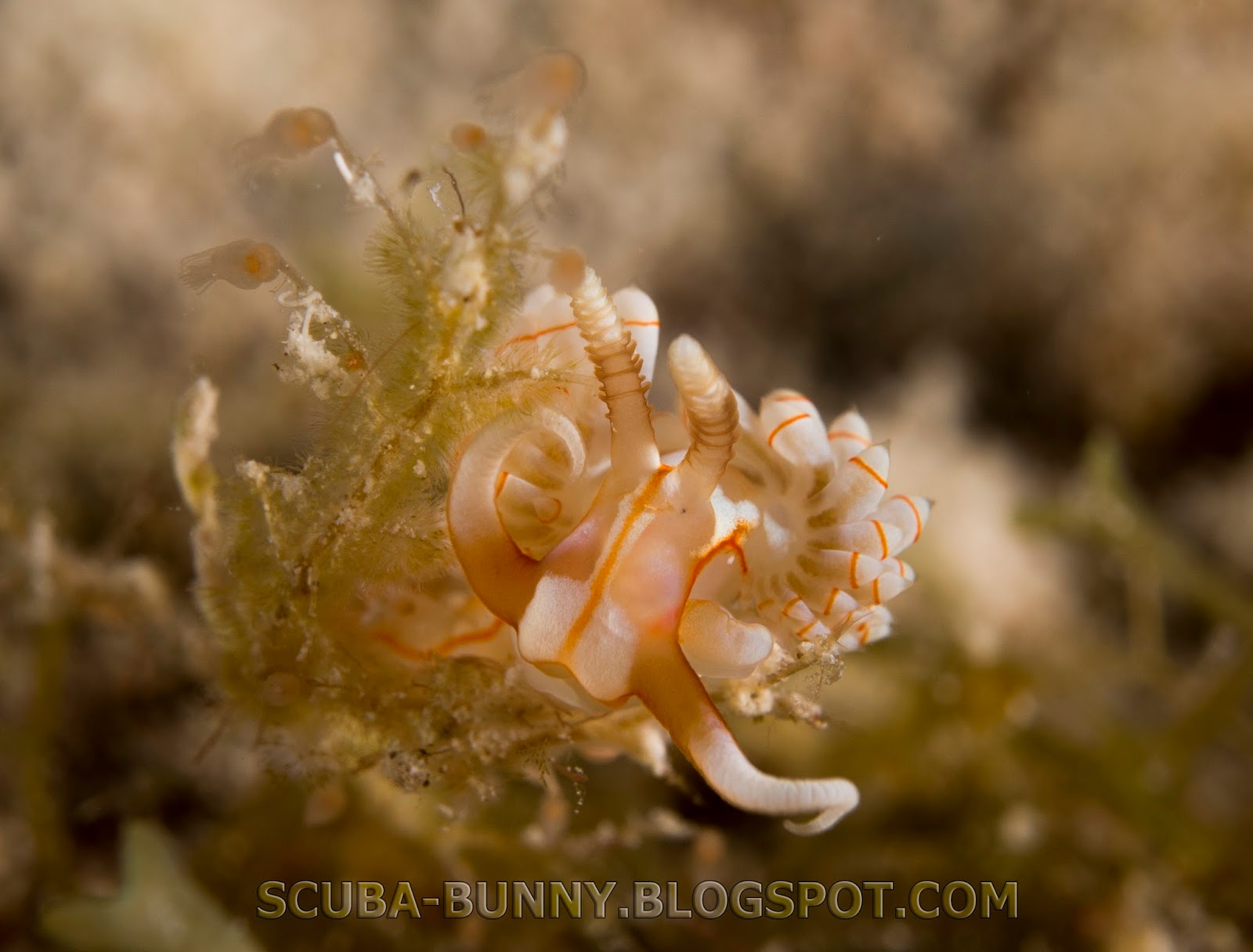 Just before the getting out there was time just to grab a couple of quick shots of a juvenile octopus and a a juvenile flamingo tongue cowrie just for good measure. Another excellent night dive and definitely worth having some patience and time to check for the little stuff. Seek and ye shall find! 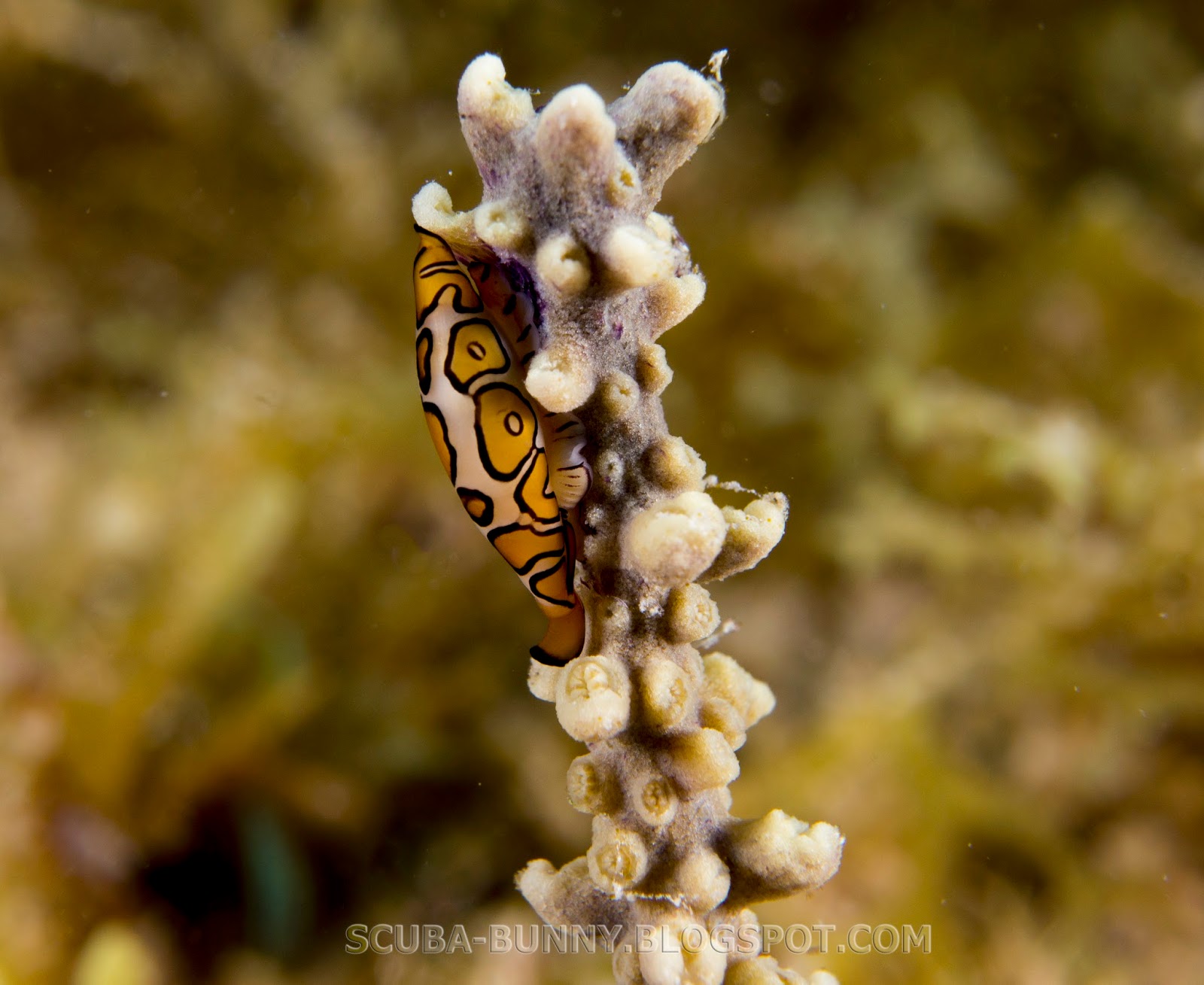 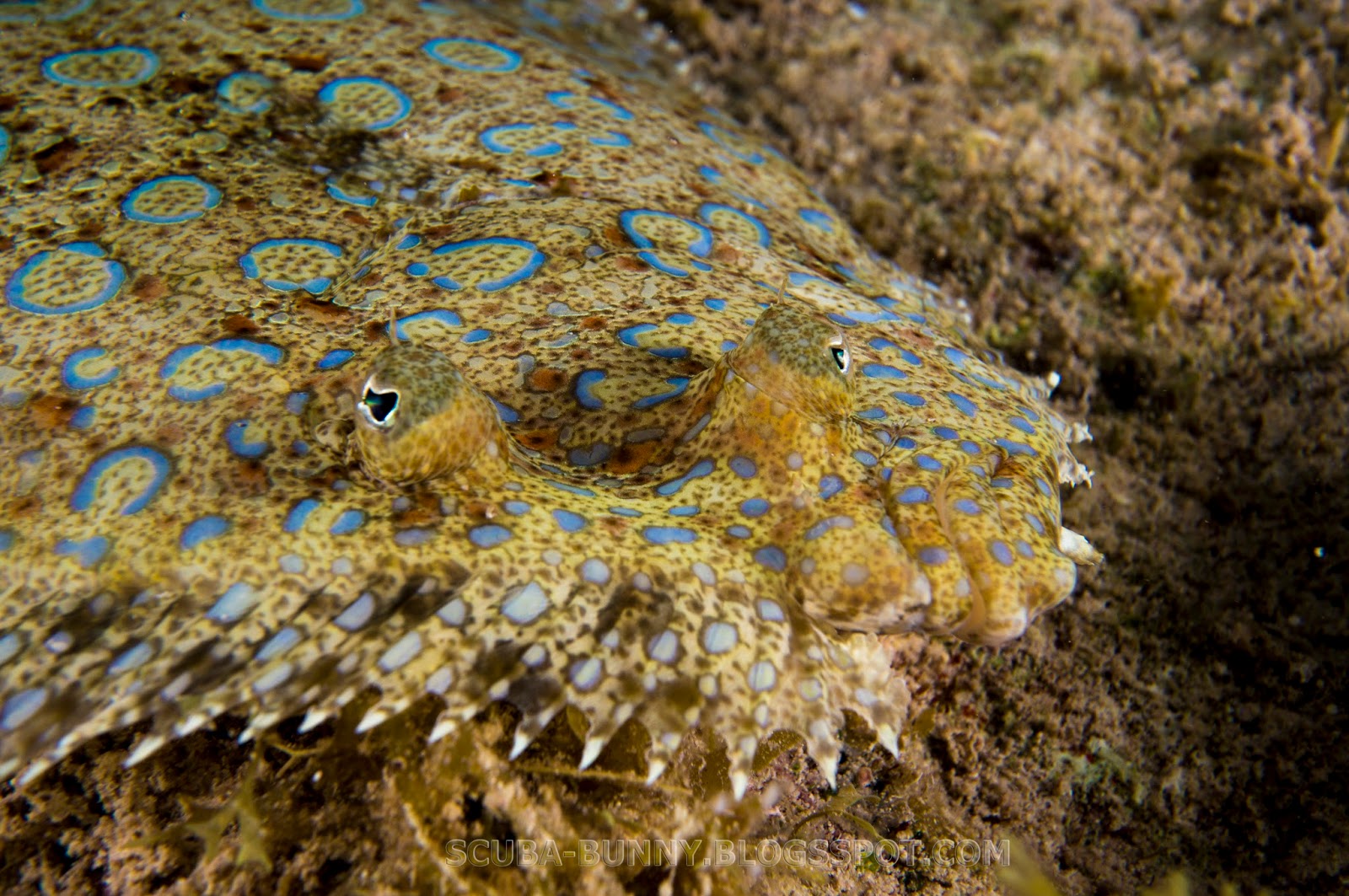 Posted by Simon Morley at 22:18 No comments: Links to this post

No, it's no the song from the little mermaid but the latest achievement set by Fabien Cousteau and his team where they studied coral reefs in a small chamber 19 metres underwater off the coast of Key Largo. The long-term underwater residence gave them a firsthand glimpse of some never-before-seen underwater phenomena.

This mission, Cousteau said, was always about getting people to care about the oceans so they will want to help protect them from overfishing, pollution, climate change and other things humans are throwing at them. 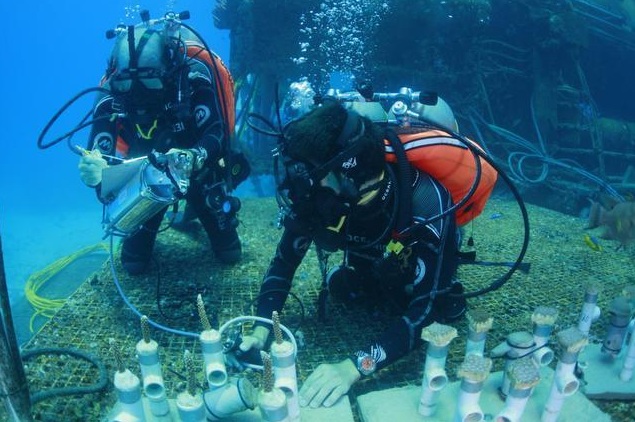 Cousteau, grandson of famed ocean explorer Jacques-Yves Cousteau, timed the mission to both mark the 50th anniversary of a similar long-term study his grandfather conducted, and add a day to the 30-day record set half a century ago. The team returned to land this week, armed with tons of data that will go towards multiple research papers.

Posted by Simon Morley at 17:06 No comments: Links to this post

Some of these are just spectacular. Alvin is back hard at work discovering hundreds of new species in the deep ocean after a $42 million refit.

"I think the new command-and-control systems make it easier for pilots to manage the sub, so they can participate more in the dive, rather than just drive," said Susan Humphris, the WHOI scientist who supervised the upgrade. "The biggest advantage of the lateral thruster is that it enables Alvin to move sideways like a crab, saving valuable time in the sub. In the past, pilots had to back up and then go forward to move laterally."

Check out the slide show at the link below on the WHOI website and see what other treasures Alvin has found for us. 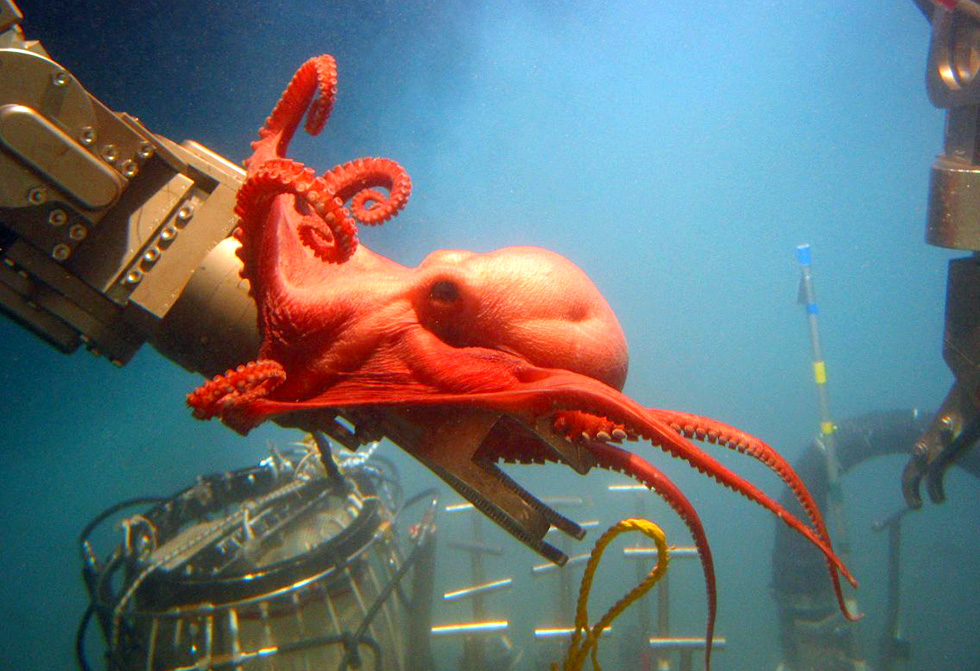 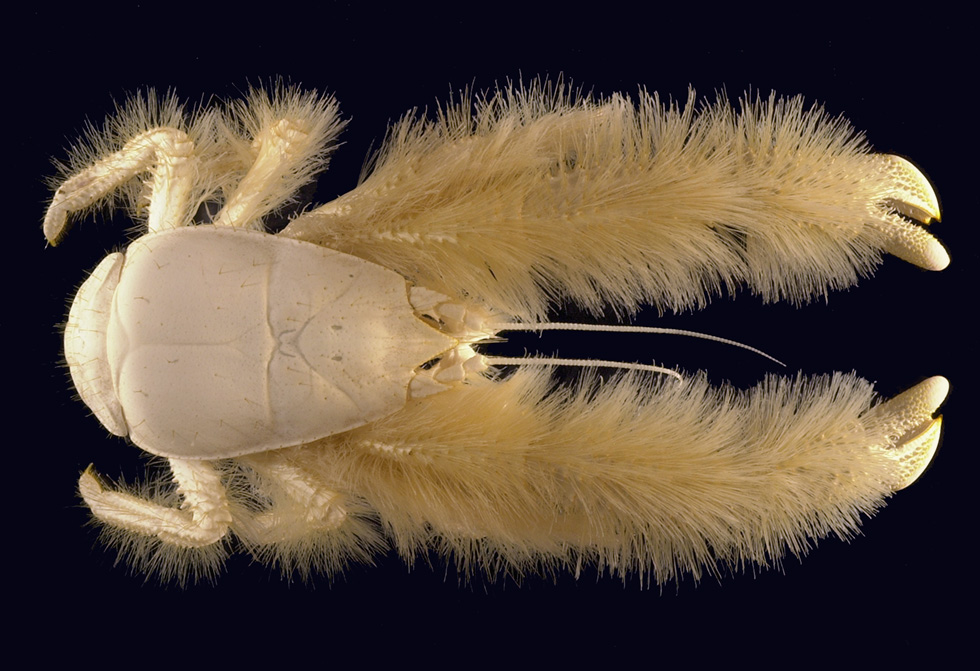 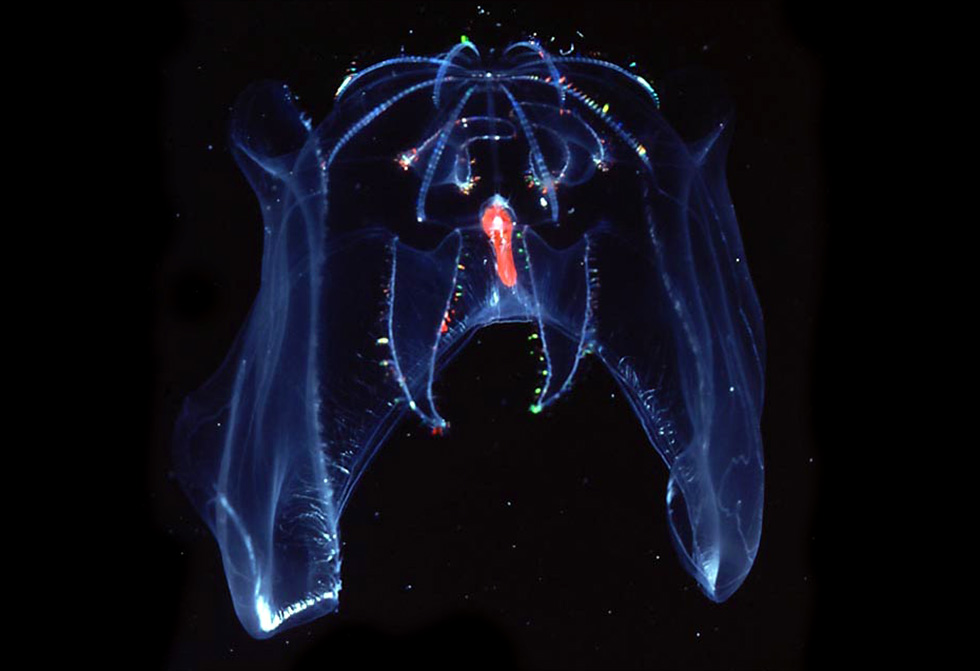 Posted by Simon Morley at 01:20 No comments: Links to this post

In a gadda da vida

With no room at the inn available to us on the East side, we elected to go West and play once more in our regular shore diving haunt. There was a slight Northerly and the viz wasn't that great but any dives a good dive. 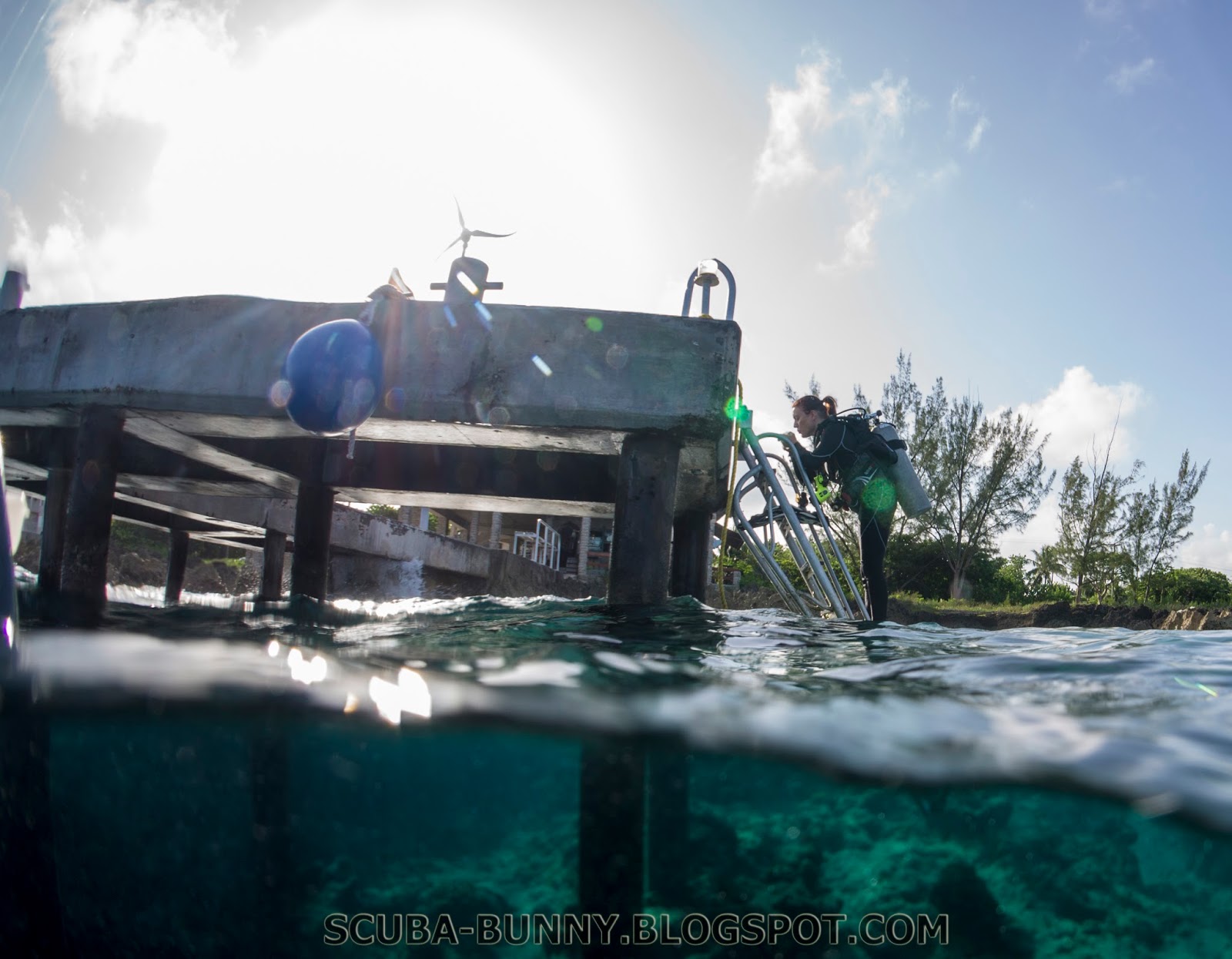 We first stopped off at the statue to get a couple of selfies as Chef Jen was offering a bucket of beer to anyone who provided a photo of their buddy and themselves high-fiving the Guardian. With that taken care off we proceeded out to the main wall for a mooch around and see what was what. 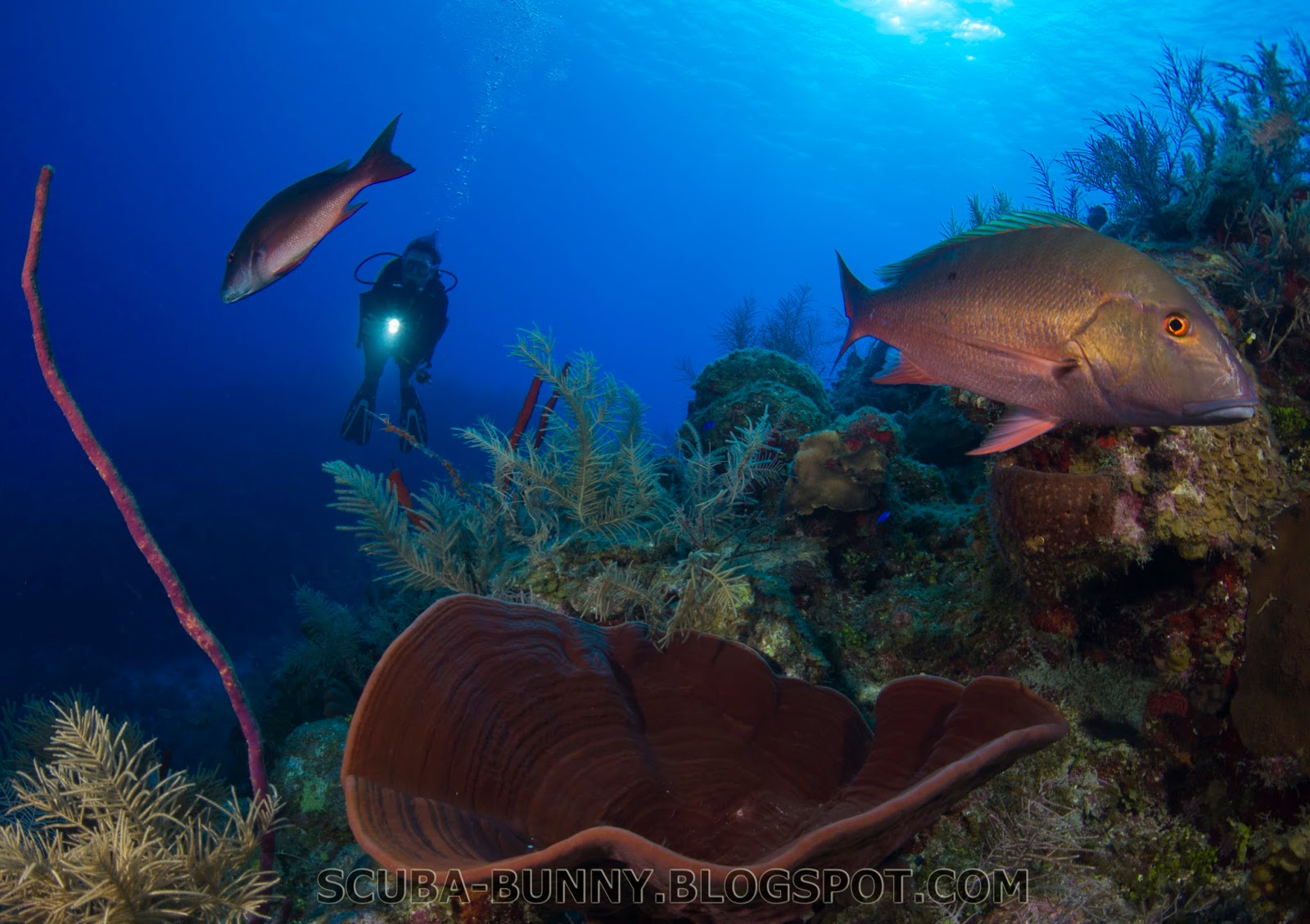 Large shoals of triggerfish, fusiliers, snappers, grunts and angel fish were the order of the morning providing a welcome entertainment for us as they went about their Sunday morning routine ( picking up the papers, washing the car, that sort of stuff ). 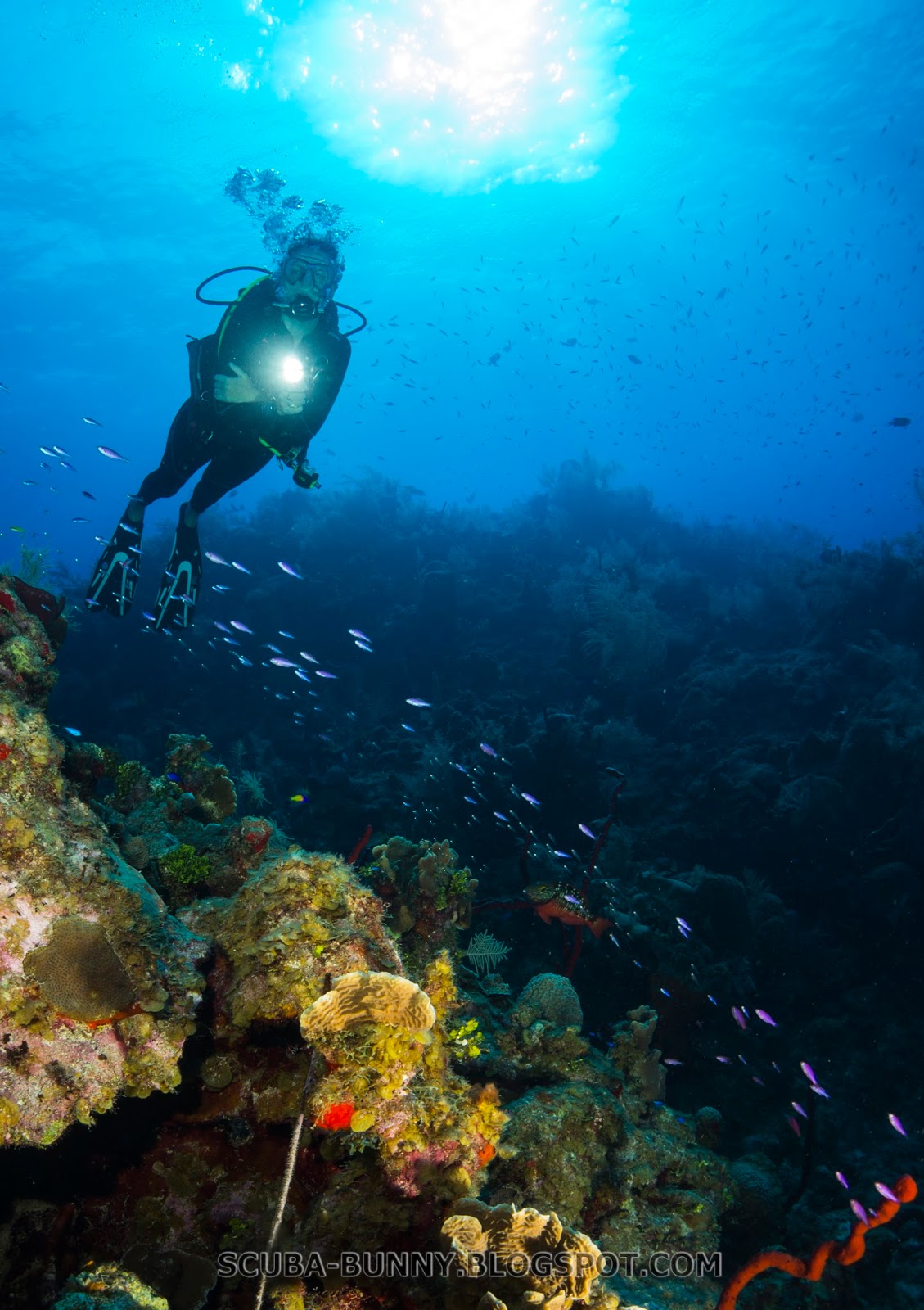 We spent a little time checking out the deep blue to see if we had any unexpected guests come to visit but not today as it turns out. With our little personnel escort of snappers and groupers, we headed back through the cut and navigated for home. With a quick swap over to macro we jumped back in and scoured the mini-wall and hard pan for all the small hidden treasures waiting to be found. Like this lovely little roughhead blenny hiding in amongst the rocks. 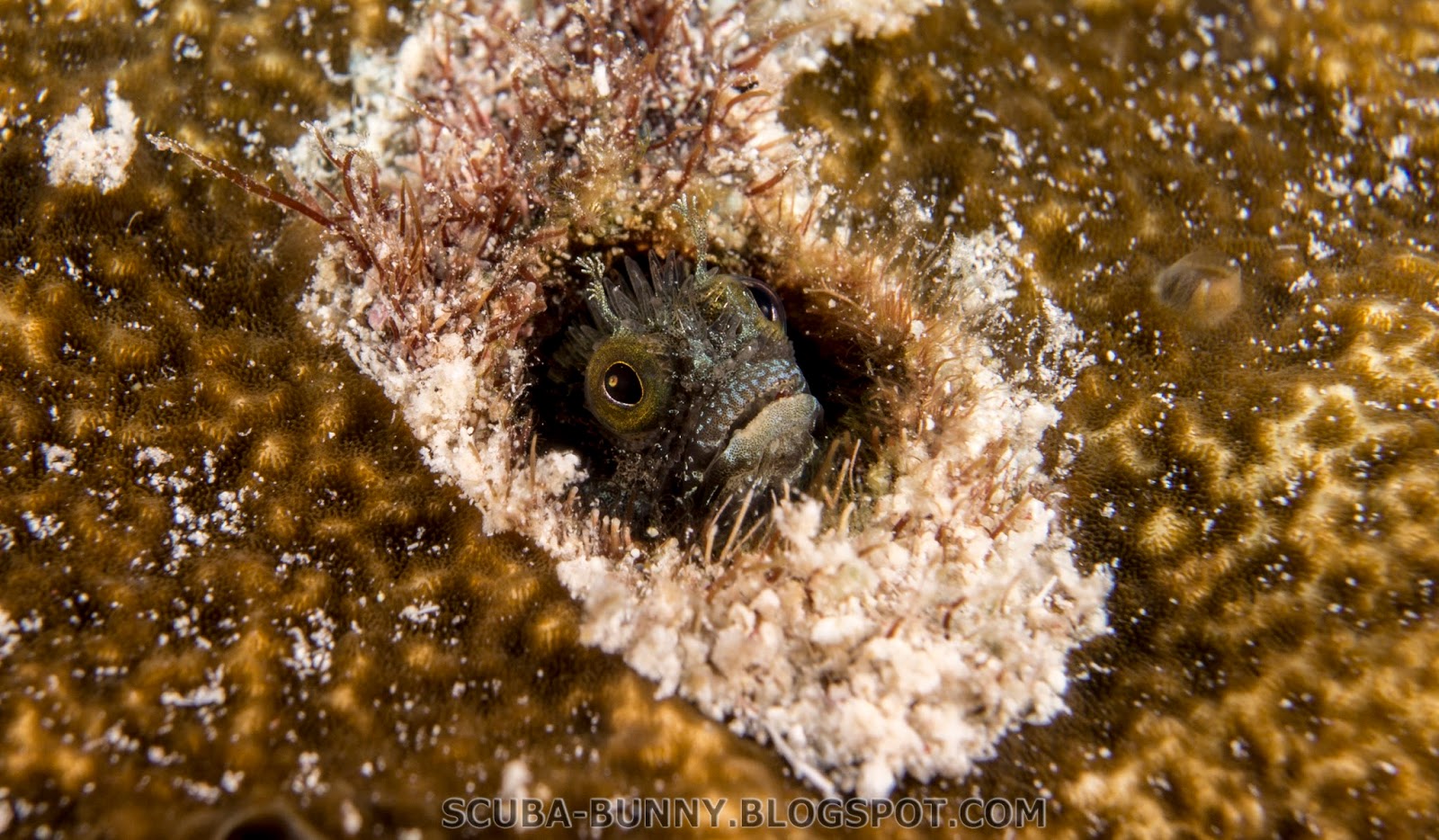 Or the secretary blennies hanging out in the brain corals. 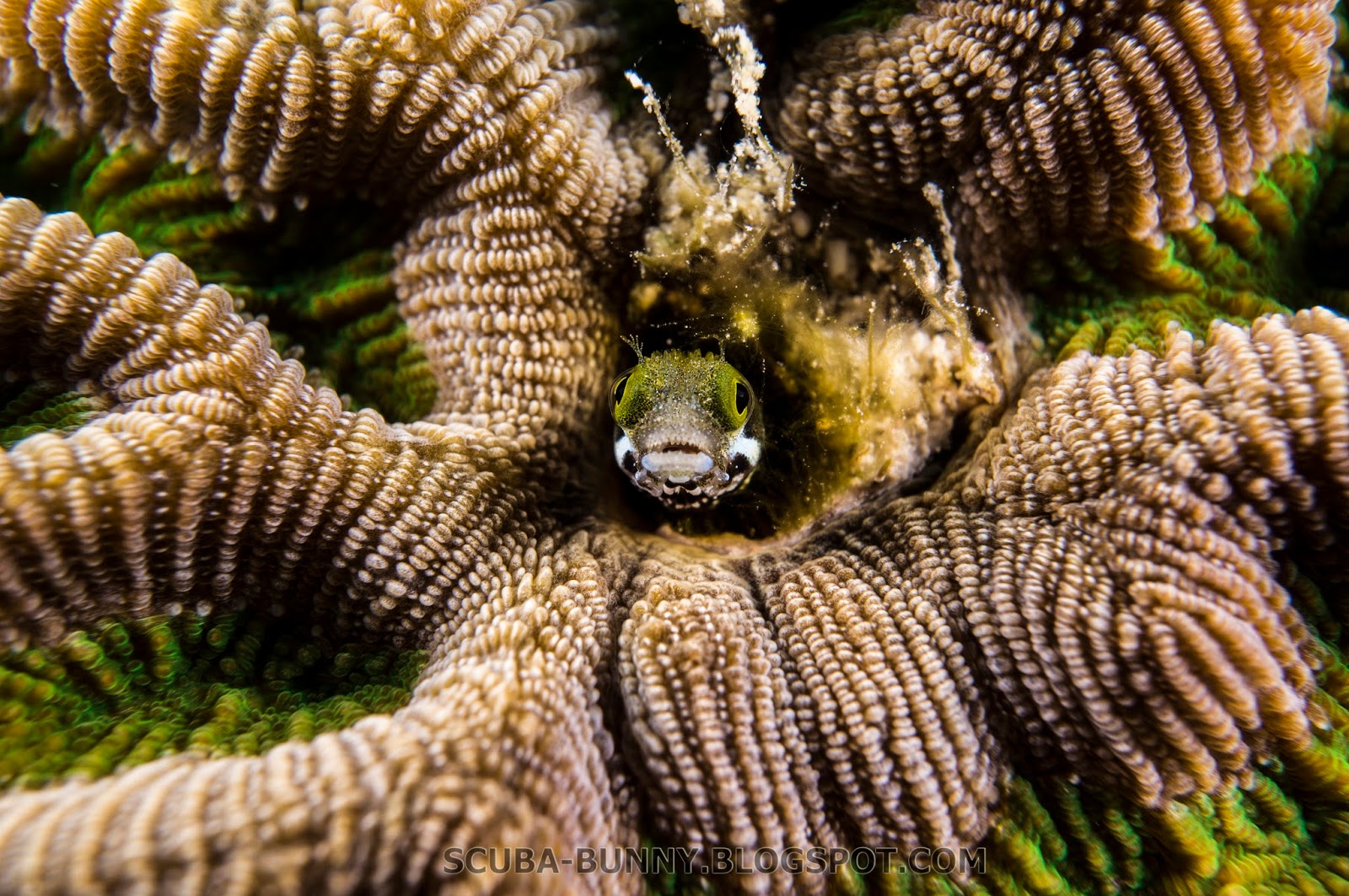 But i think I struck gold this morning when I spent some time at the six metres mark in the hard pan and found a tiny little shape moving in and out of it's hole. After ten minutes of coaxing and patience I was finally rewarded with a juvenile swollen claw mantis shrimp. Skittish little fellow but it was worth the wait. Even got a little video footage as well. 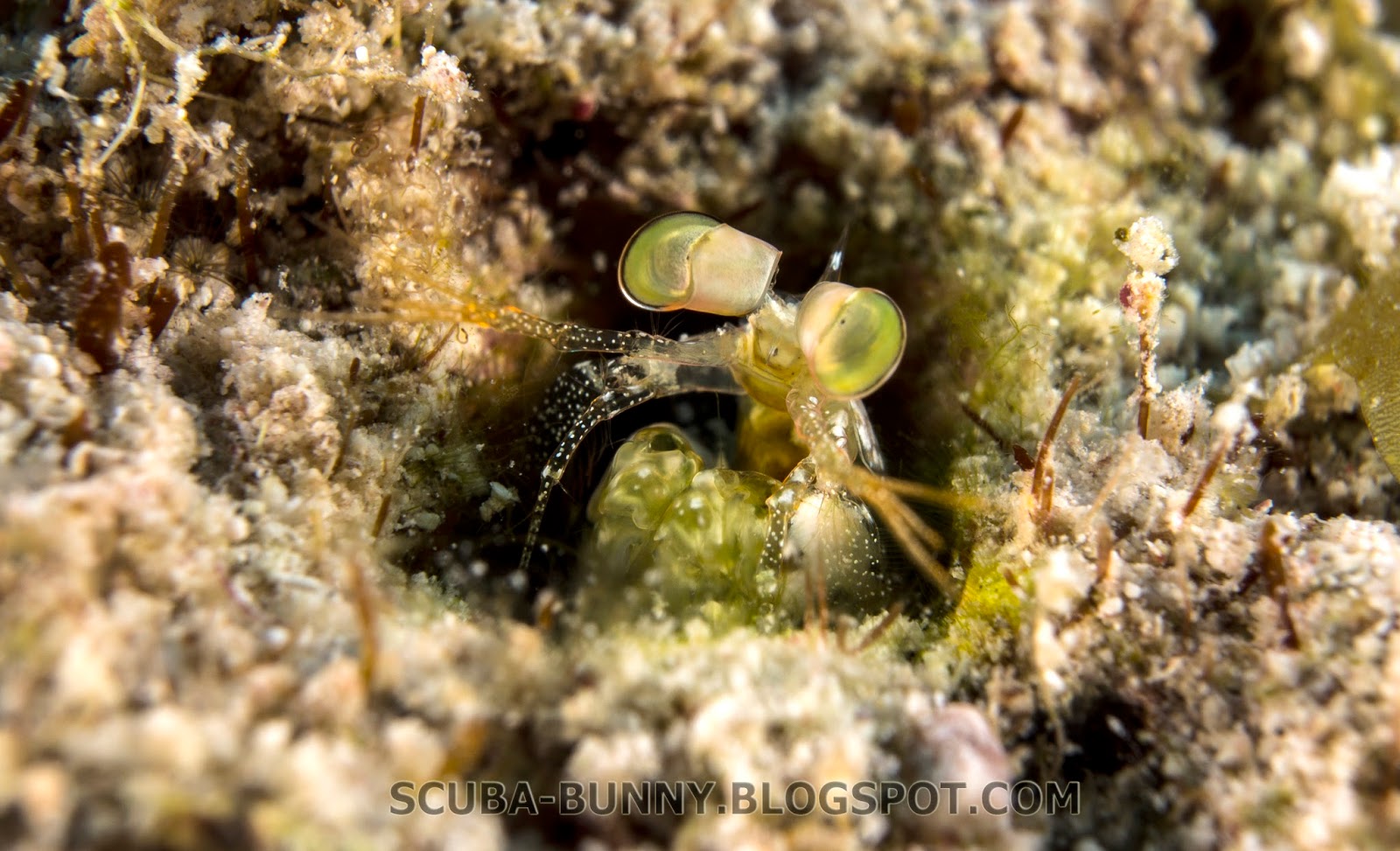 During the safety stop, we did think there was an early eclipse going on topside as the sun was blotted out, but after looking up it was just a herd of about twelve tourists swimming out at the surface. Amazing how much natural light they can block out...........

But of course a dive wouldn't be a dive without finding some nudibranchs at the end of the dive like this juvenile tritonia hamnerorum on a sea fan. Another good days diving. 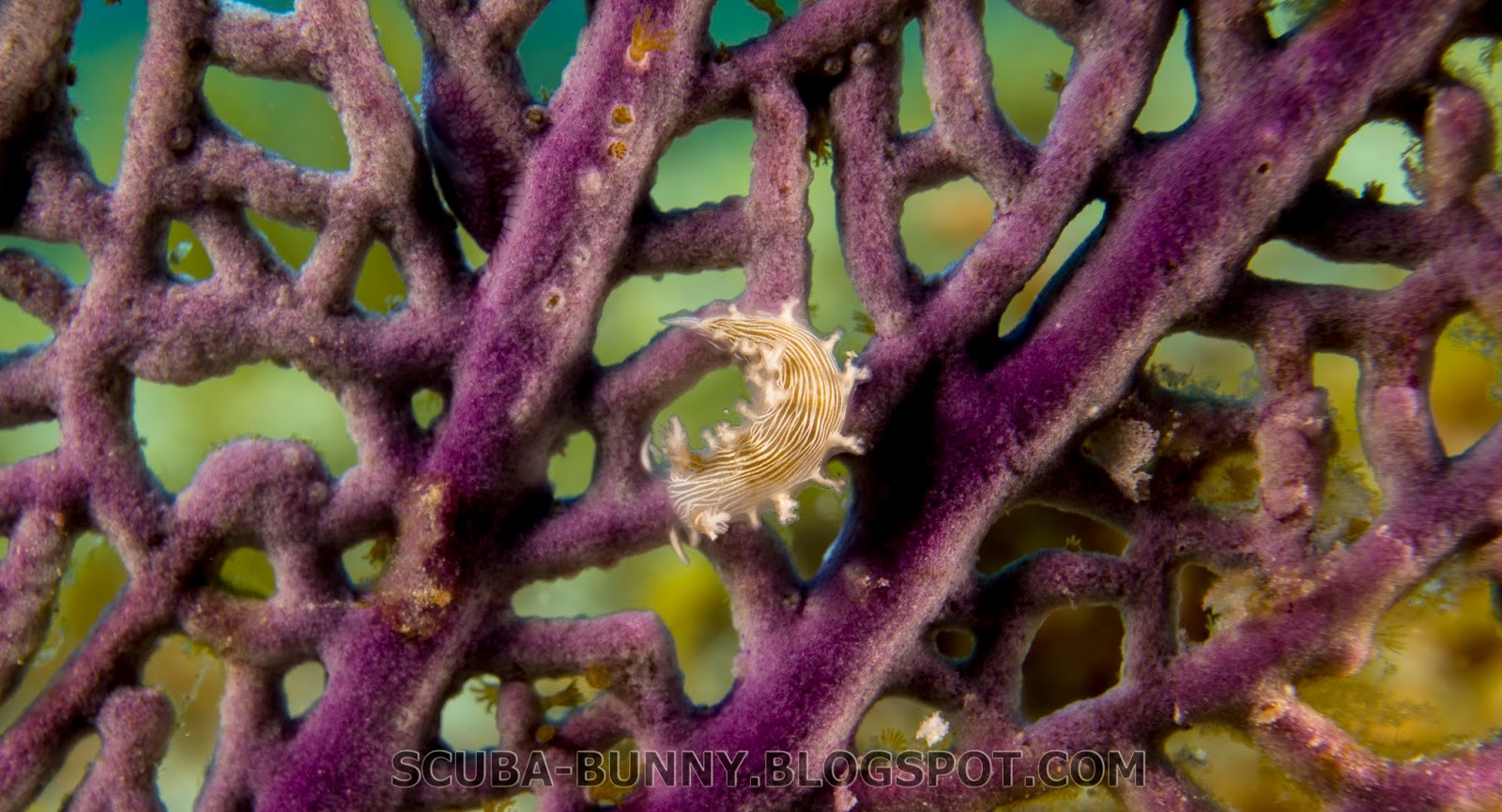 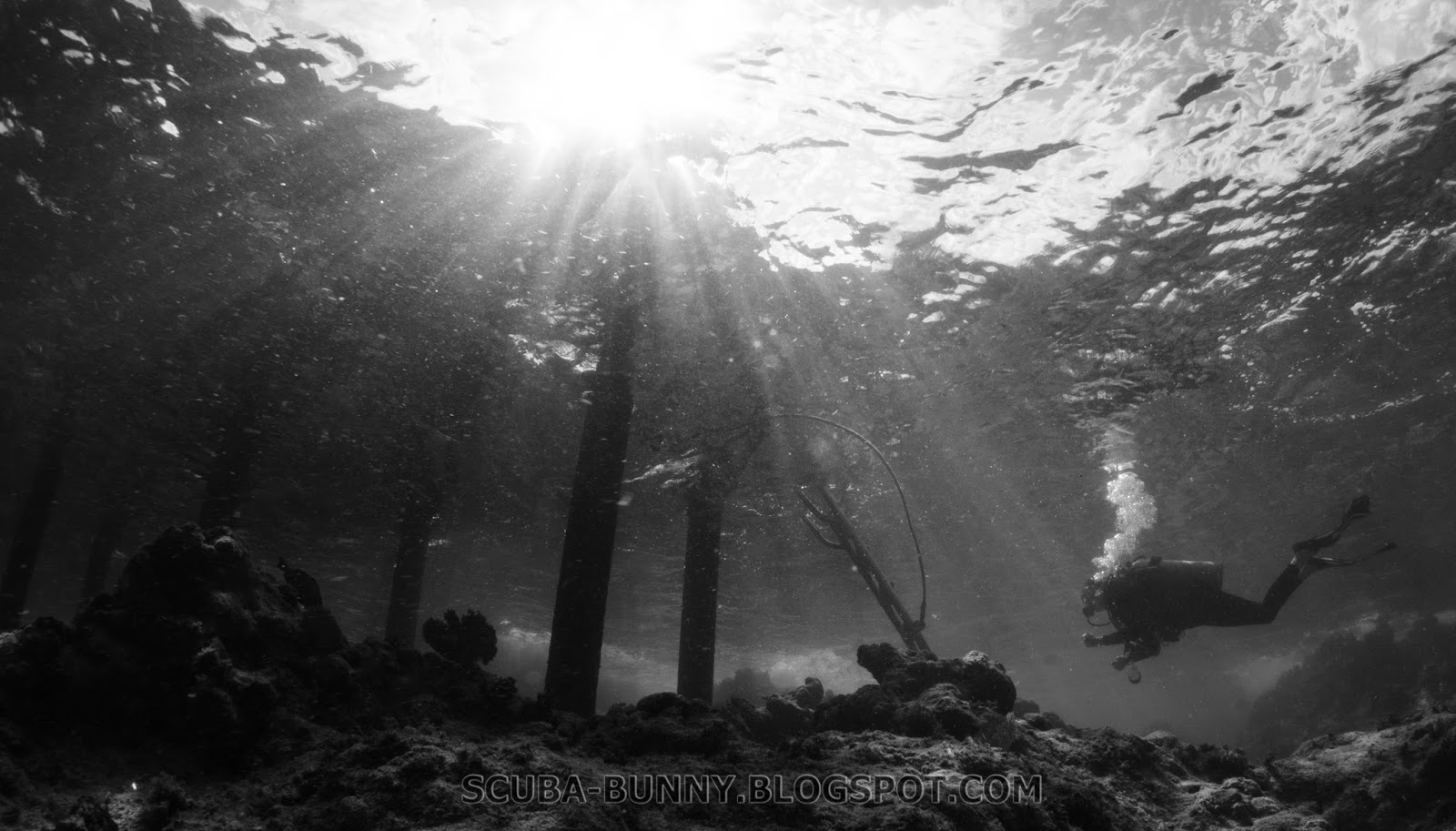 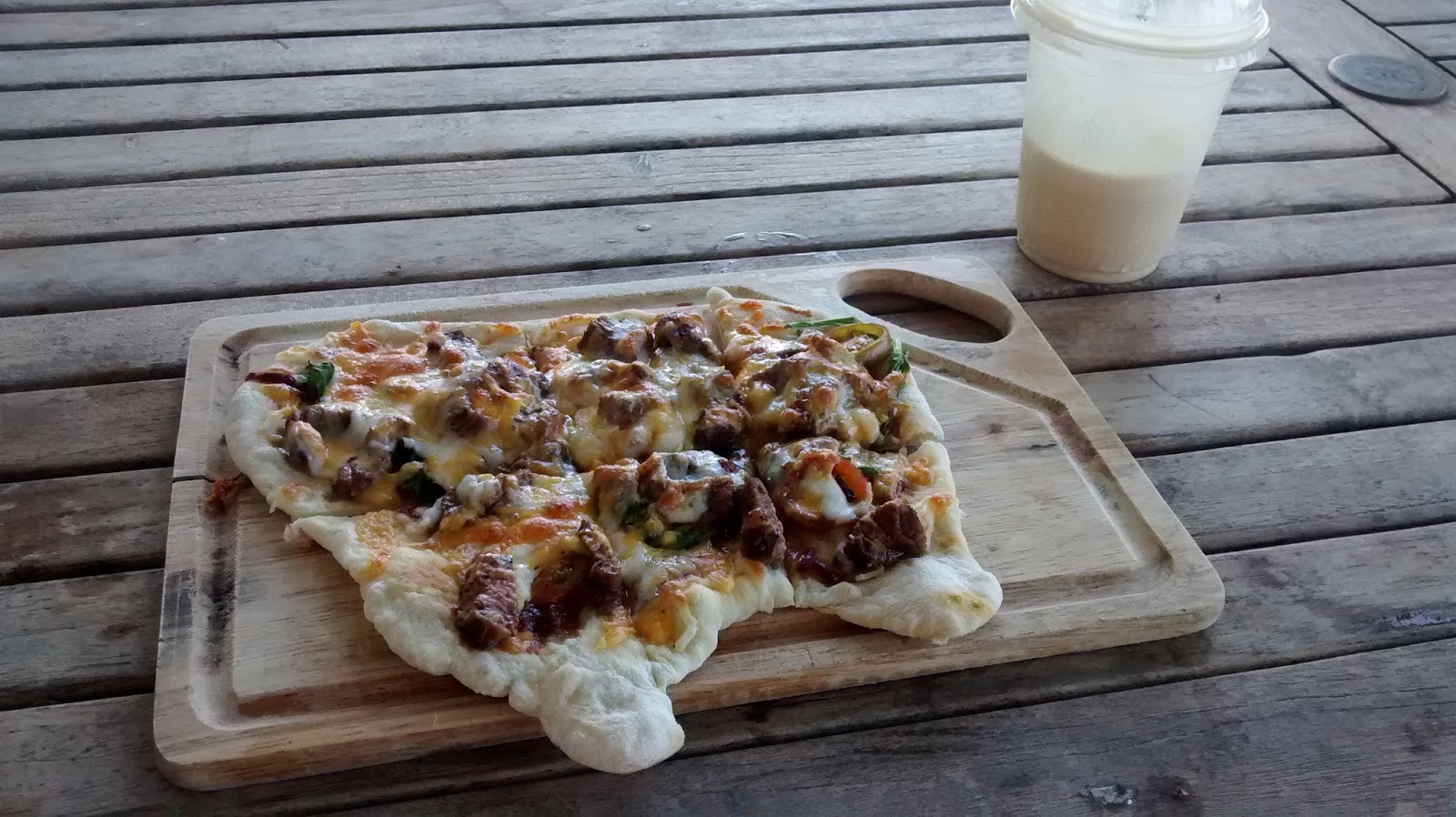 Posted by Simon Morley at 14:56 No comments: Links to this post