Only a northern song

What a great day we had in the water, despite the limited visibility. The first port of call was Northern Lights which turned out to be a good choice on the part of Captain Nige as it has been a while since we were here but the scenery was spectacularly breathtaking.

We had 10-11 knot Easterly making it a little bit lumpy at the surface but nothing to write home about. The start of the dive proved to be a little challenging for some individuals as well as Captain Nige.

Poor sausage, I felt sorry for him but I don't regret giving up teaching/guiding on a full time basis. I already paid my dues many times over back home, but then that's why they get the superstar wages to put up with people who don't properly follow the pre-dive brief.

Anyway, once everyone was sorted out, we headed East down at depth to enjoy the show that Mother nature had put on for us. 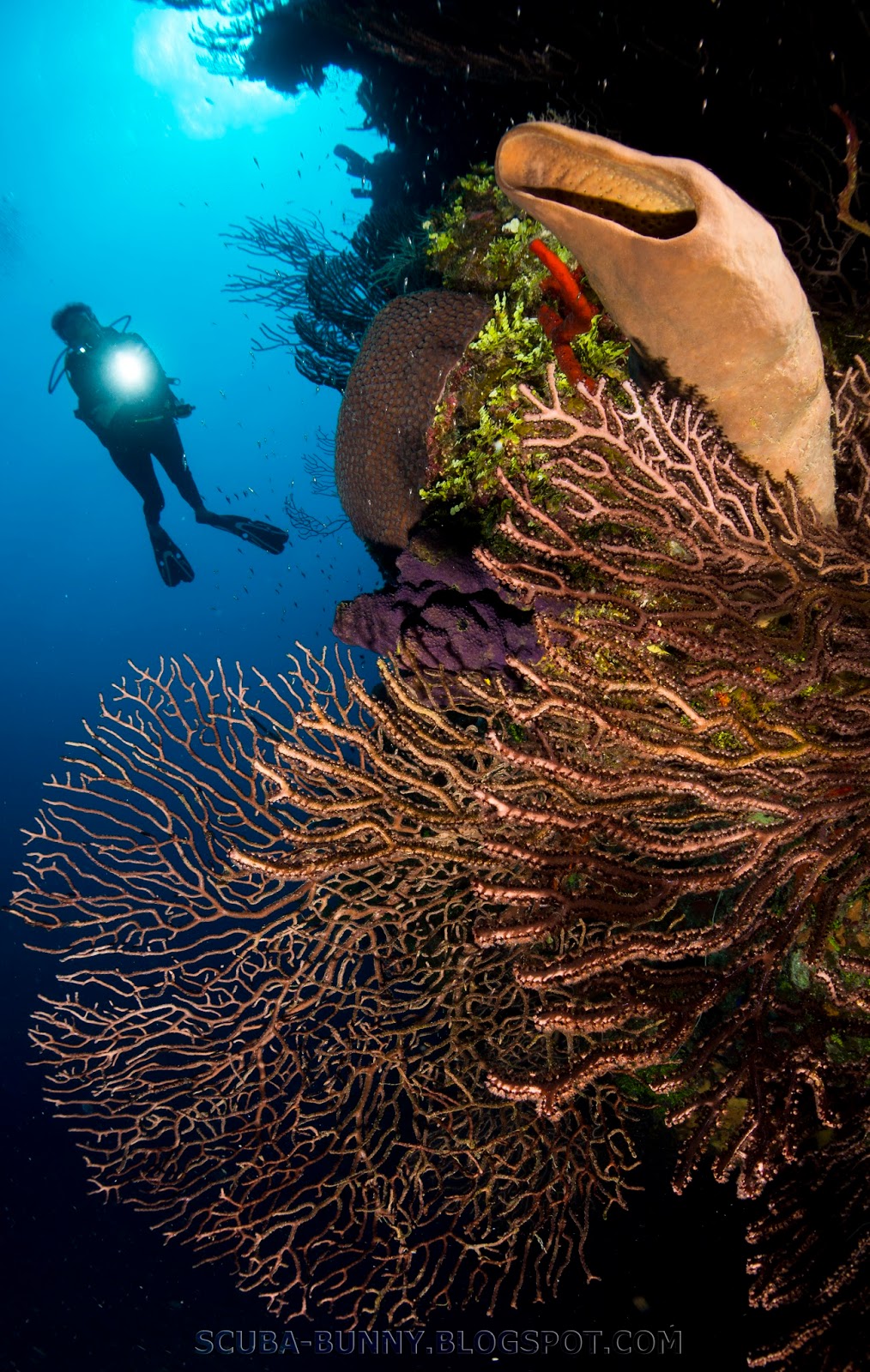 And waht a show with amazing fan corals, rope and barrel sponges with all the colours of the rainbow on display for the expectant diver covered with a healthy sprinkling of damselfish and sargeant majors for good measure.


We didn't see any big stuff on this particular outing but that's the way things are, some days you get lucky and others you just get great scenery like some great hard coral formations to have a real good look around to see the good stuff. 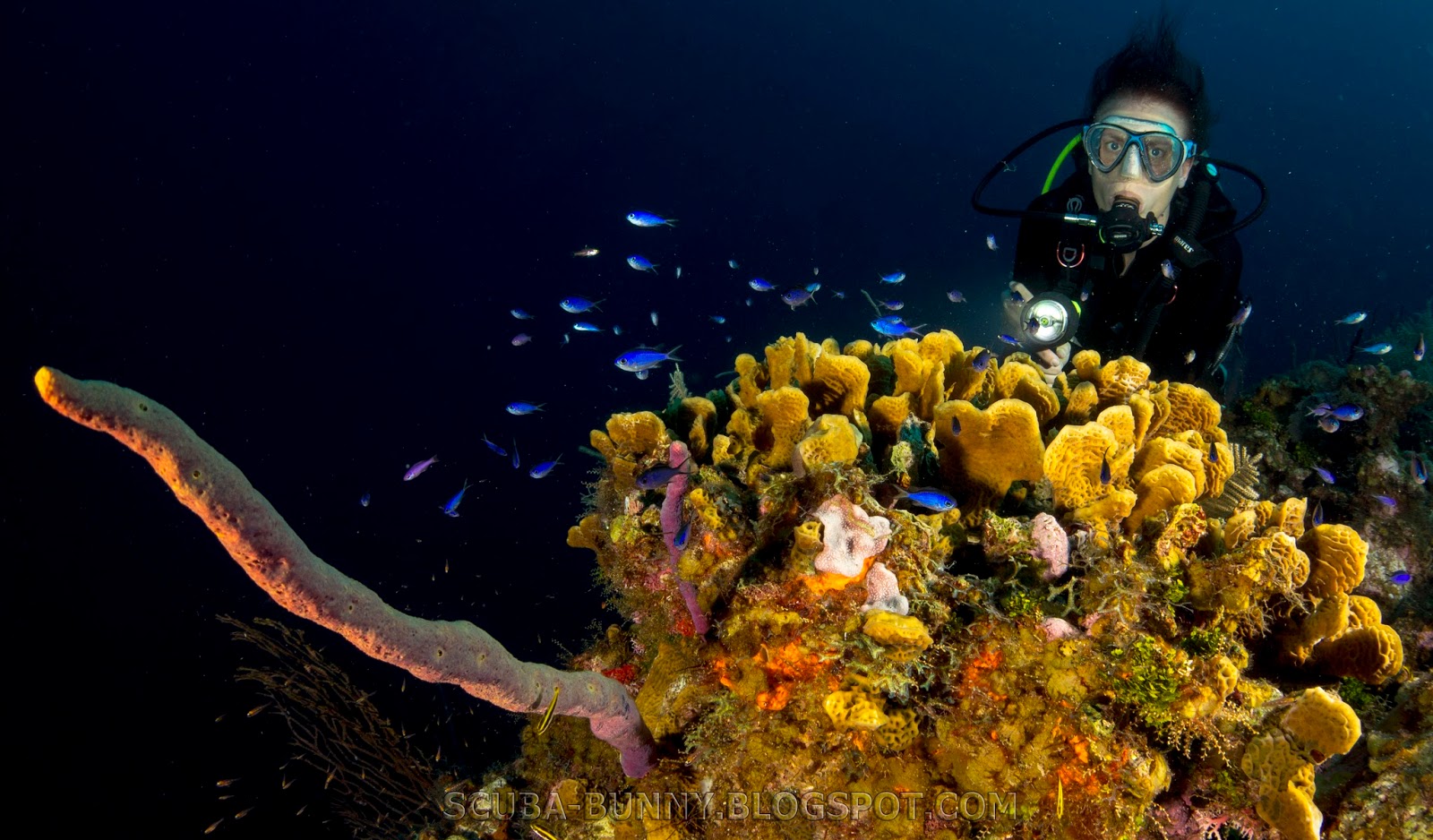 And with the light in the right place over head, I was still able to get a couple of quick silhouette shots for fun despite the reduced viz. 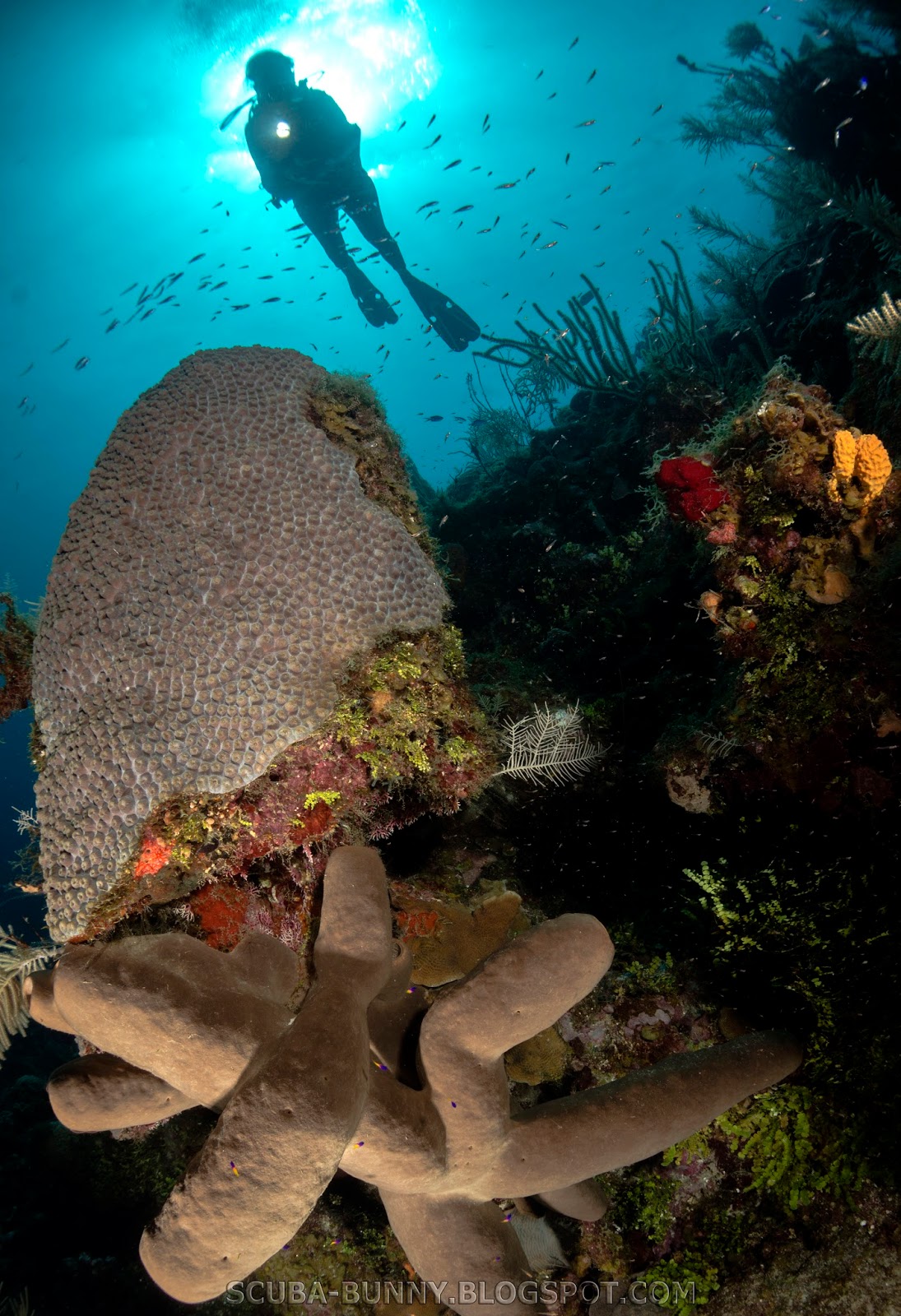 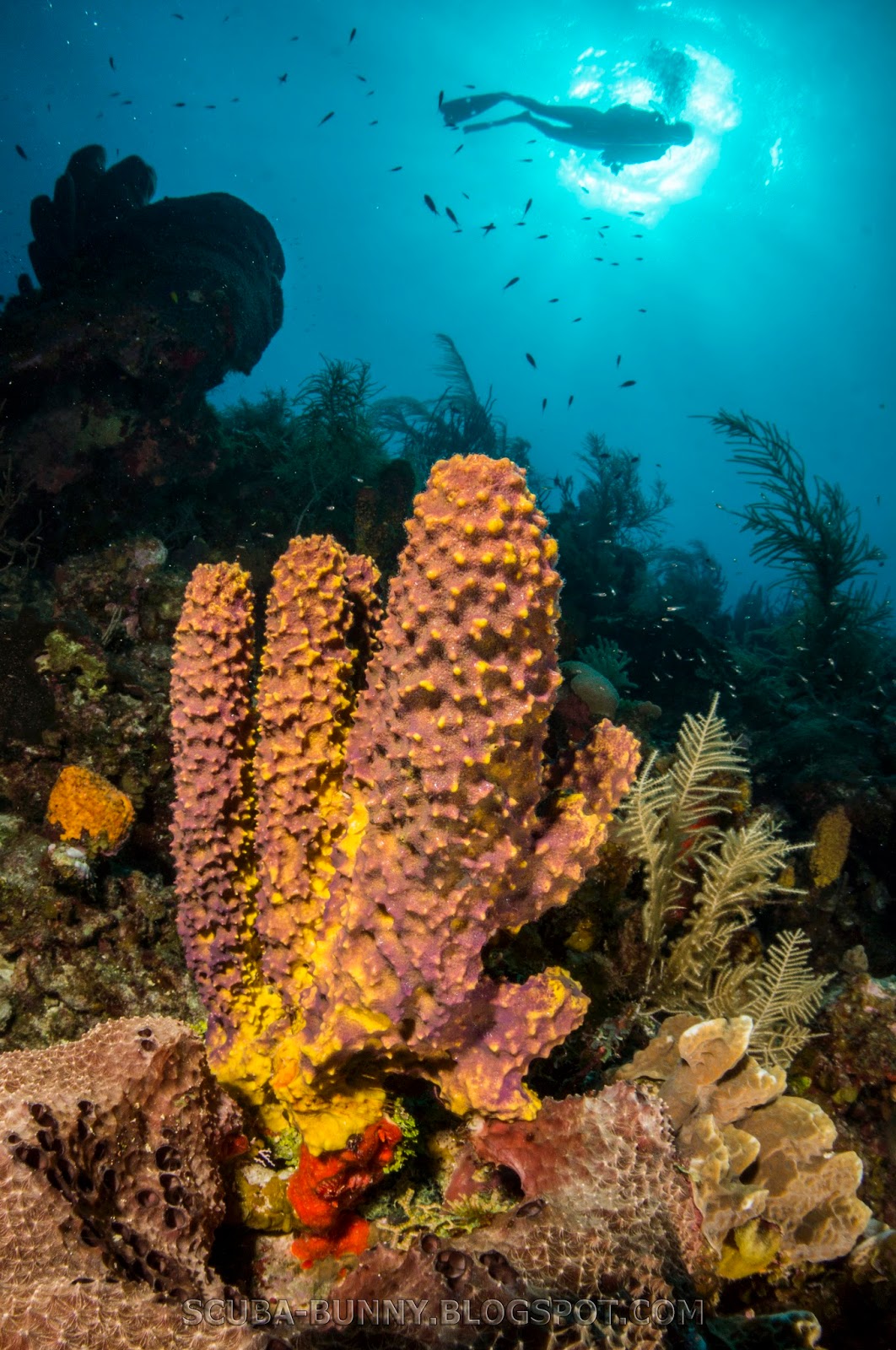 After getting back on board, we motored off closer to home with the second dive taking place at Fish Tank. Or thanks to Ian's artistic skills, Whale Dalek as it has now been re-christened. Don't give up your day job sir!

I can honestly say I've never been overwhelmed with Fish Tank, sorry, Whale Dalek, every time I've been here. It just don't do it for me compared to somewhere like Black Rock reef, however any dive is a good dive and you make the best with what you've got. In this case some monsterous elysia crispata, probably the biggest I've seen yet on the island. I'm sure it could have taken a hand off if you got too close........ 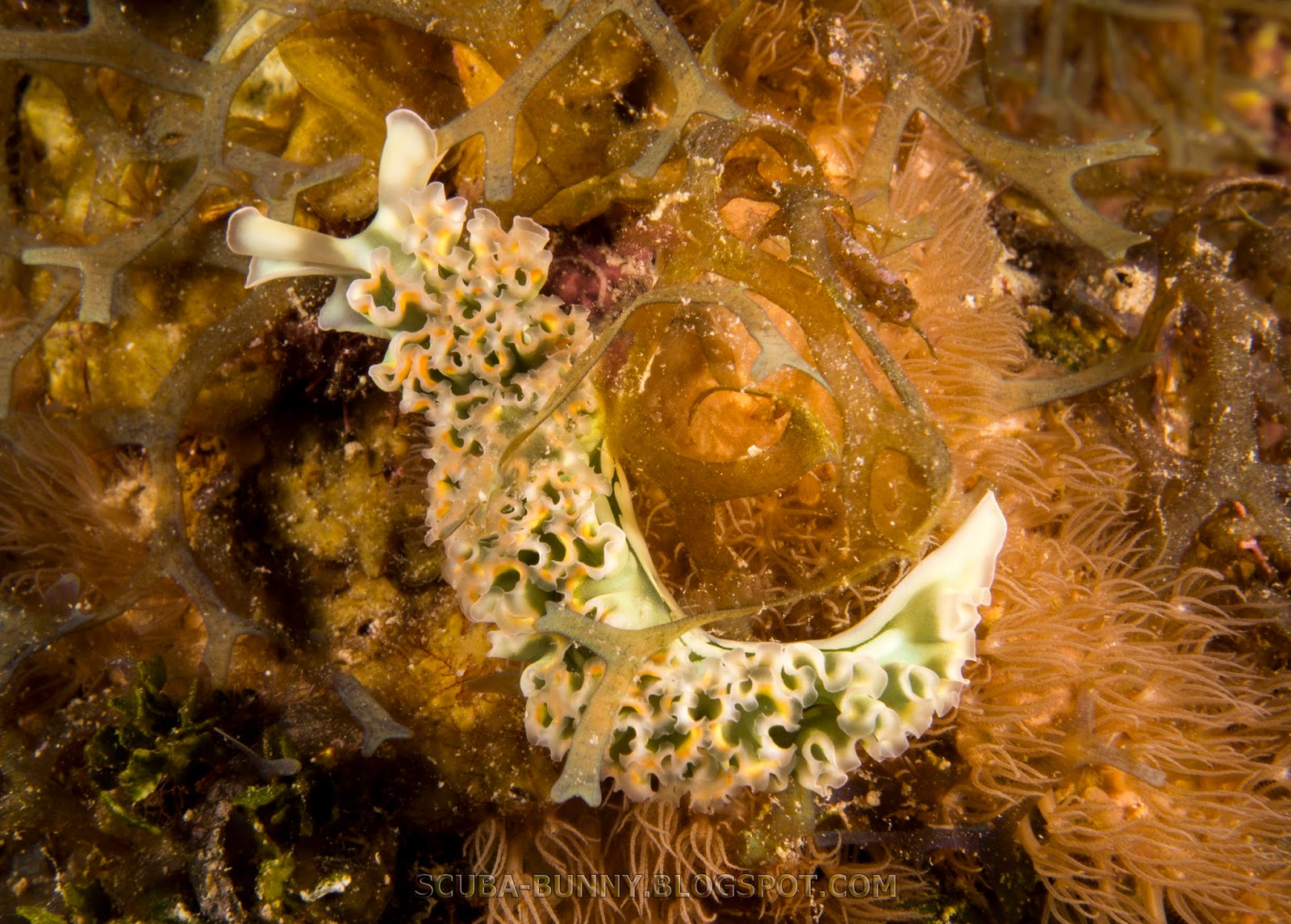 After backing up sufficently to get the godzilla-like nudi in the frame for a shot, I notice a movement out the corner of my eye by some rope sponge which turned out to be a tiny juvenile filefish trying to look inconspicuous. If it could whistle and look nochalant, i'm sure it would have. 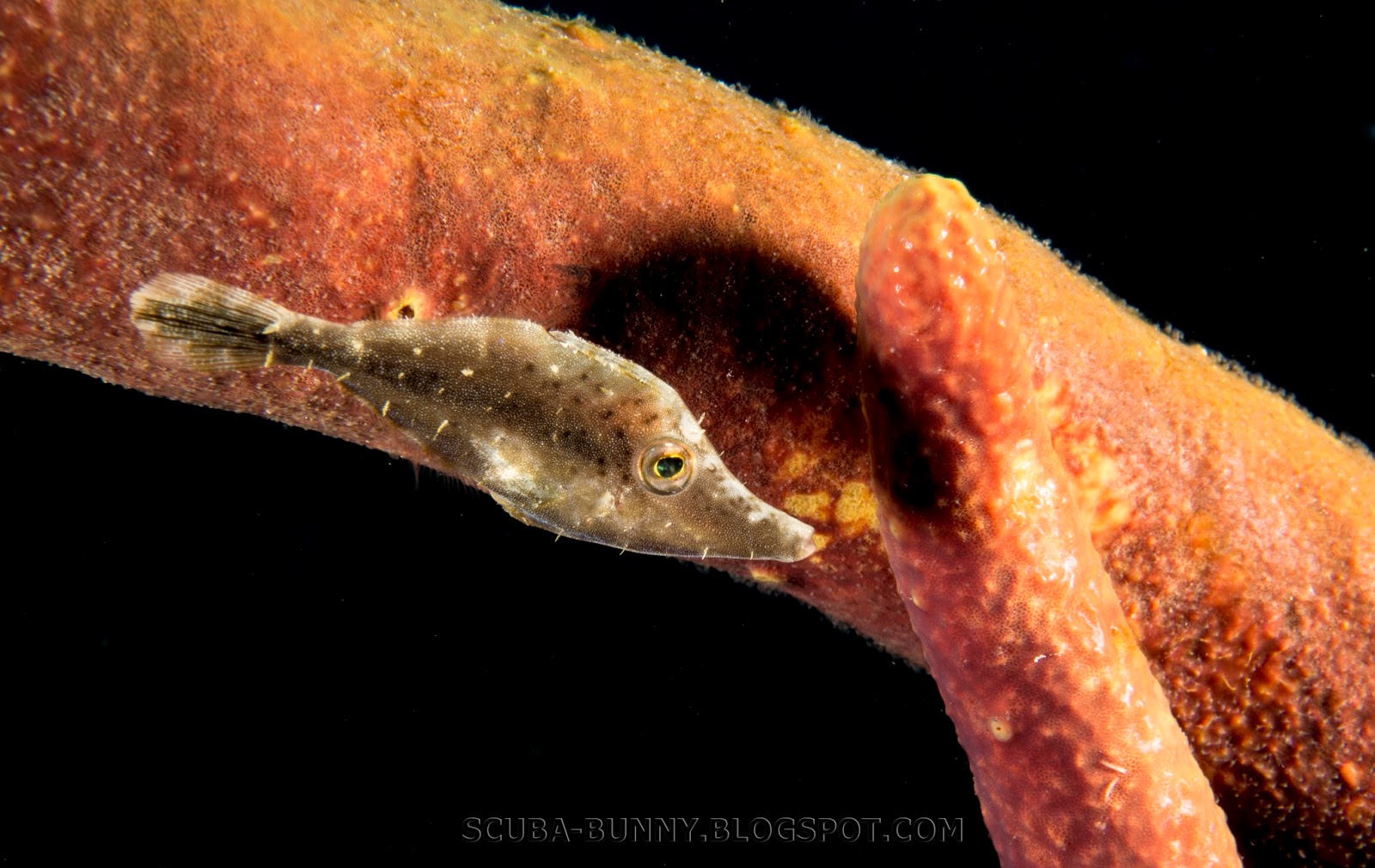 There wasn't too much else happening in the nooks and crannies as even after a good scour I only managed to unearth a saddled blenny and a tiny roughhead blenny, but it was still nice to get shots of them all the same. 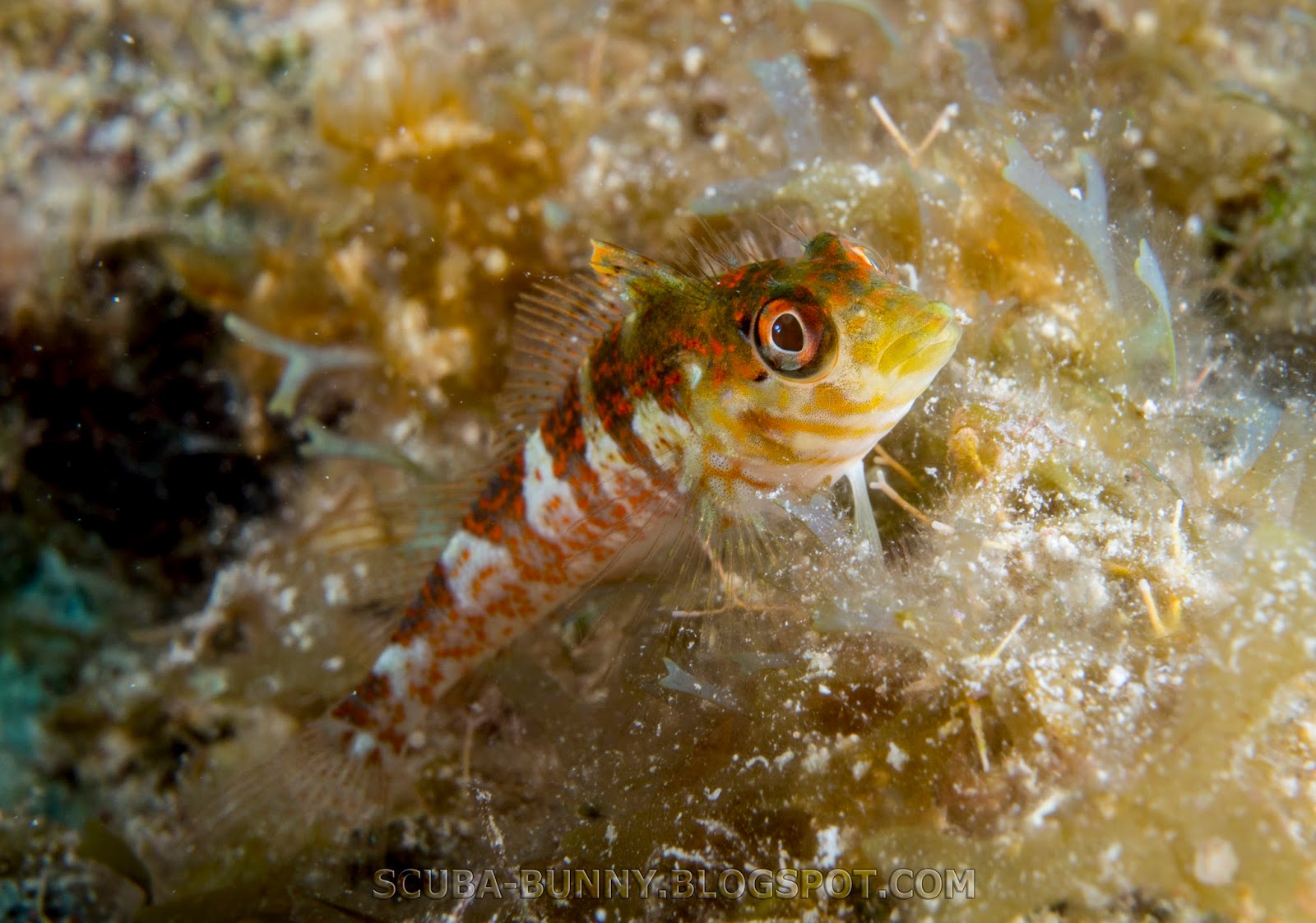 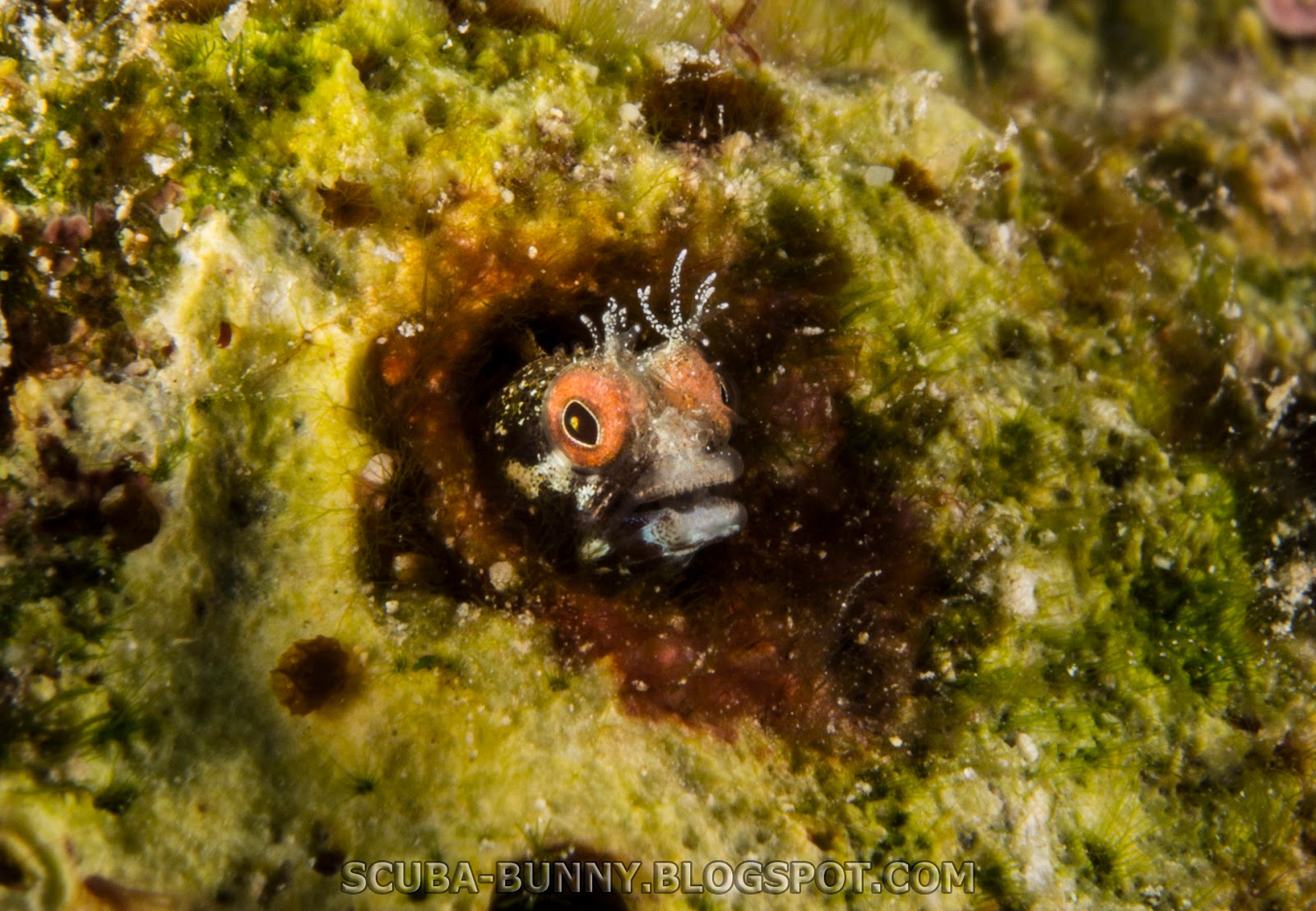 A great days diving on the North side with Captain Nige, Linda the Swedish assassin and Ian providing the comic relief. If you get a chance, check out Northern Lights as it one of those sites that you are guaranteed not to be disappointed with.


Posted by Simon Morley at 00:41 No comments: Links to this post

Incase you hadn't seen this before, the deepest pool in the world is currently Y40 and is located inside the Hotel Terme Millepini, in Italy. It contains 4300 cubic meters of thermal water at a temperature of between 32-34C and it's impressively deep, 40 meters.

The pool is designed for training apnea and scuba diving. Check out the video. At least here you don't have to worry about the tidal conditions or the viz! Posted by Simon Morley at 00:57 No comments: Links to this post

This is pretty interesting and something that should be considered for the benefit of the environment and the existing marine life providing it doesn't harm cause any damage/harm during the decomissioning process and any clean-up.

"Off the coast of Southern California, there's an underwater city. A thicket of almost 30 enormous steel oil rigs, each as large as a skyscraper, bolted to the floor of the ocean. Most of them are elderly, aging giants—and soon, the state will need to make a decision about whether to rip them up or let them stand. Either option comes with huge risks." 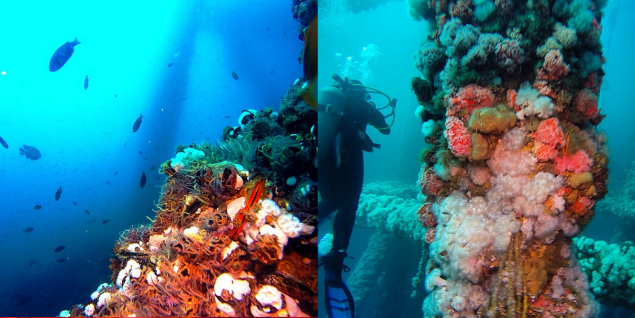 "But over the next few years, every last one of these rigs will go dry or be decommissioned. Until 2010, state law required that they be removed entirely—but it now allows the option to convert the rigs into artificial reefs instead."

As many scientists have pointed out, these decades-old structures play host to incredible amounts of sea life. In the Gulf, part of an increasingly popular solution called "rigs to reefs," decommissioned oil rigs are sliced off at the water line to preserve the ecosystems—essentially creating artificial reefs below the surface." 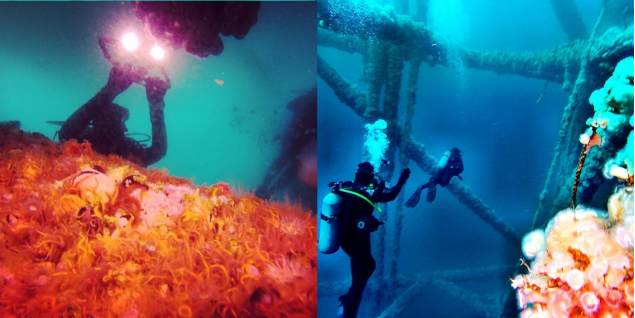 Posted by Simon Morley at 20:49 No comments: Links to this post

Killing in the name of

There was an itch to scratch as seeing as the significant other was off island, I had to default the plan be and take the short Canadian diving with me. It also gave him an excuse to get in the water as the only time he gets wet is when he gets caught in the rain!

So off we trotted to Eden Rock and the first dive over at Devils Grotto as we had been reliably (ha!) informed that the silversides were back. Although to be fair, they were there, just not a lot of them.

L'assassino Mancini had his game face on as he was on the hunt for any lionfish, so that kept him happy whilst he flitted from overhang to overhang trying to route out the scourge of the caribbean.
Squadrons of tarpons were crusing out and about and we had a few snappers follwing us around for obvious reasons. 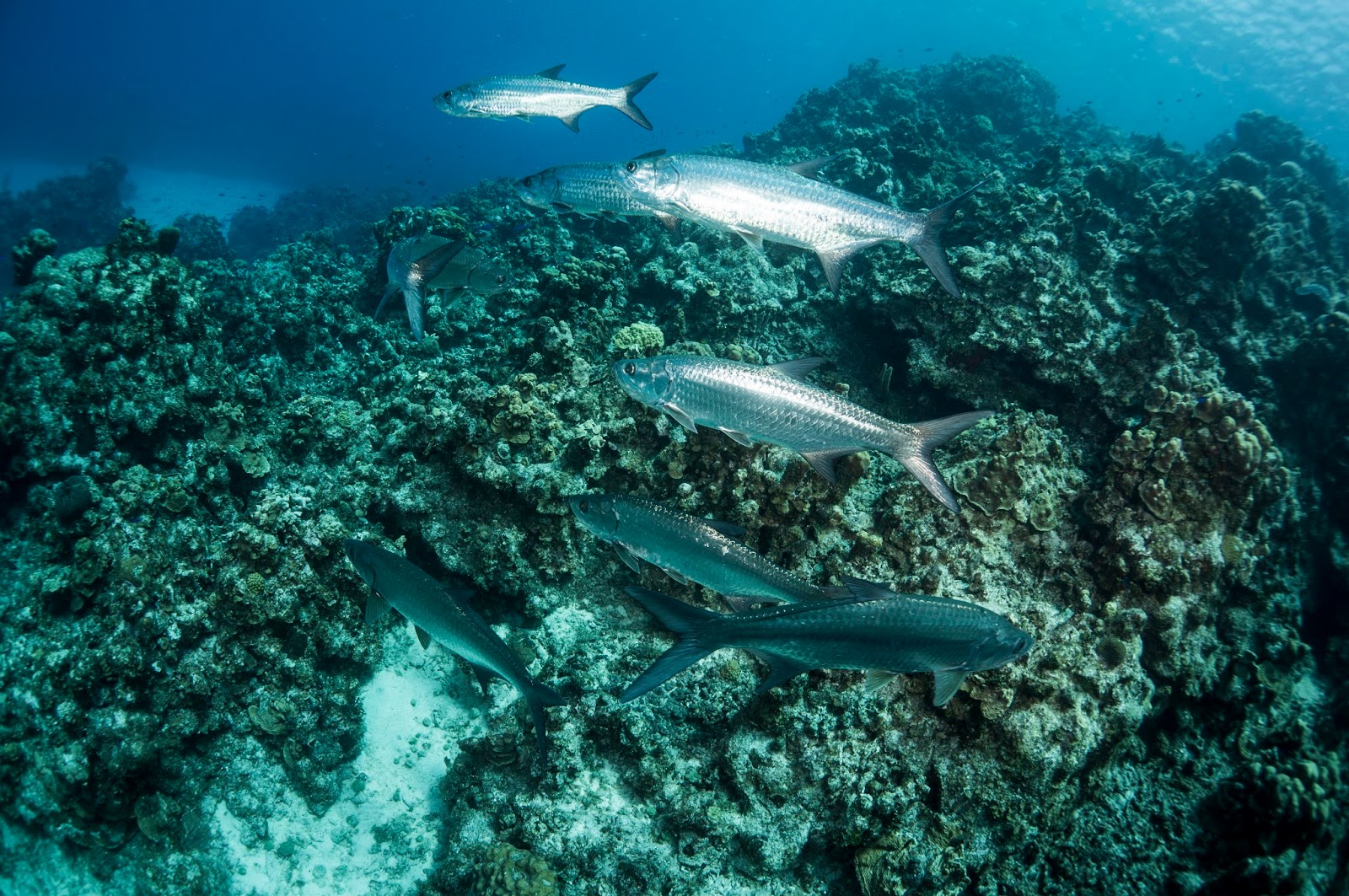 As we found outm the dive site is very well hunted so there was little opportunity to spear any lionfish although Martin did get one in the bucket and it turned out to be smaller than the one he had used to win the last tournament for the smallest lionfish, in this case just over 5cm. Half a centimetre smaller than the winning entry. Size is important apparently......

Dive two took is back to Devils Grotto to pick up some additional shots due to a little mis-communication on the previous dive before conducting a sweep of the reef over to Eden Rock itself. Again there was very little to spear but he did get another one in the bucket. 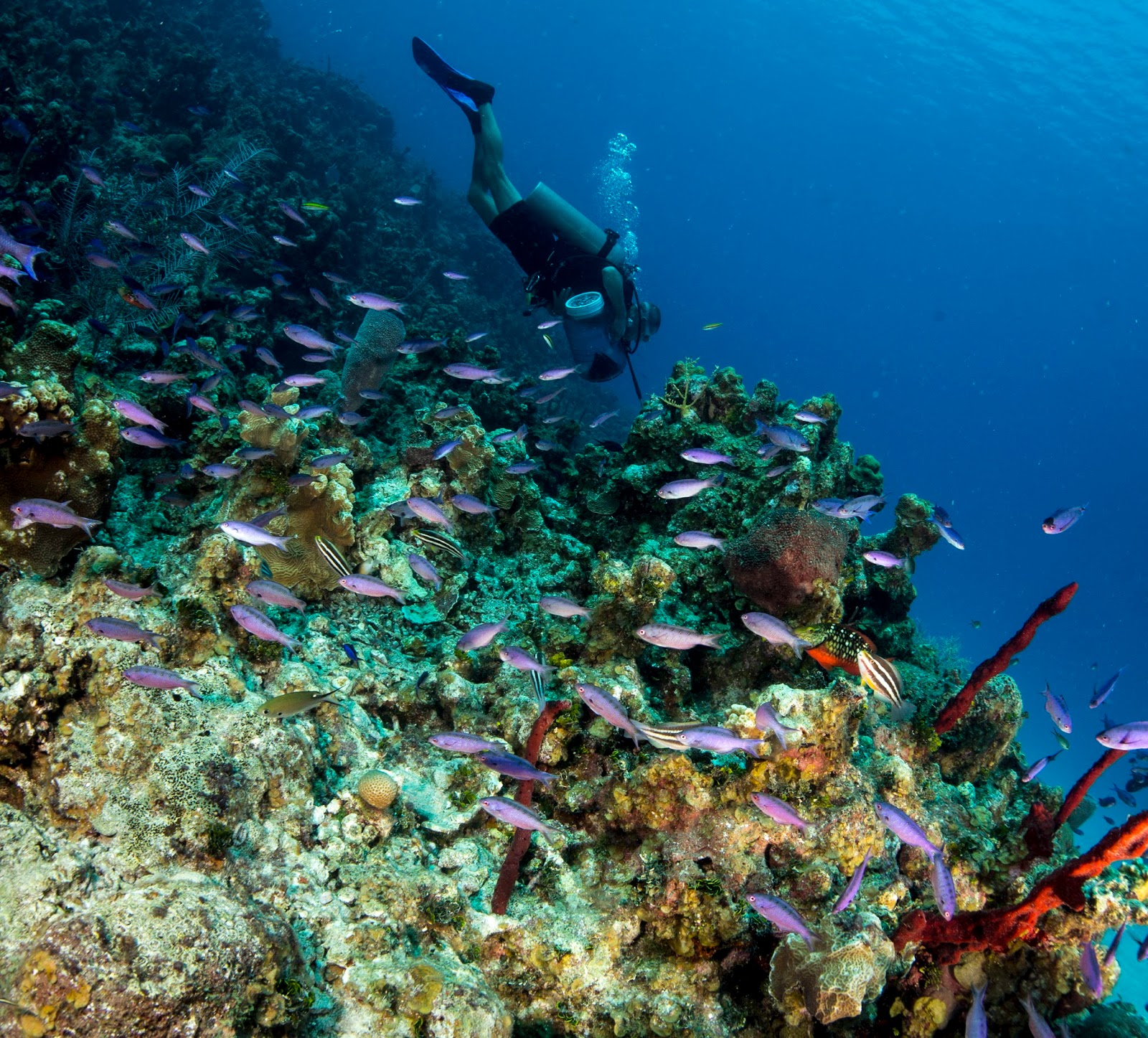 And he found a monsterous moray as well but unfortuanately it was in such an awkward place, the effort to get into such a small space wouldn't have been worth it. And it probably would have buggered off by the time I got anywhere near it as well so we left it alone.

And after all that diving, it was only fitting that we retire to the bar for a beer and white russian or five. With any luck and a bit of space, we'll be throwing ourselves off a perfectly good boat at the East End this weekend with our friends at Tortuga Divers.

Posted by Simon Morley at 01:15 No comments: Links to this post

Apologies for the slight delay in updates. Hopefully normal service will be resumed this weekend. In the meantime please enjoy some soothing music.


Posted by Simon Morley at 01:41 No comments: Links to this post