NASA has started testing its new Buoyant Rover for Under-Ice Exploration (BRUIE) prototype, and as you can see above, it looks markedly different from its predecessor. It's taller, thicker, has rotating segments to be able to take pictures from different directions and can withstand depths up to 700 feet.

This prototype also has communications equipment and sensors similar to those used for Mars Cube One. That's the communications CubeSat slated to escort the InSight lander to the red planet.

The agency recently put the new BRUIE to the test for a few days inside a 188,000-gallon tank at the California Science Center, where it spent its time taking photos of tropical fish. It was attached to a corner and didn't have its wheels in the aquarium, but it'll most likely get them back for its next test run near one of the planet's poles. 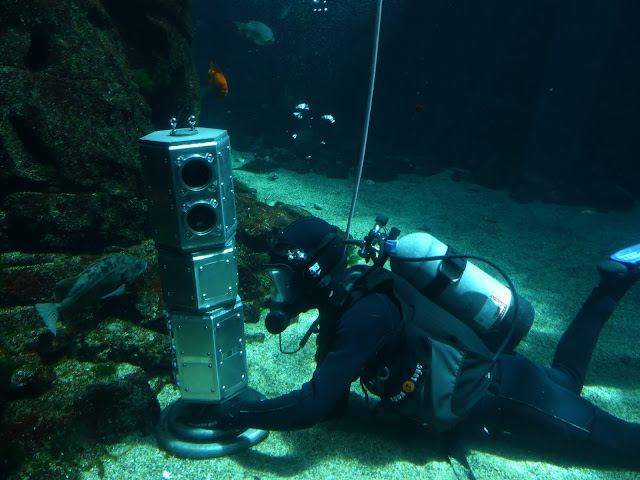 Provisionally called the Buoyant Rover for Under-Ice Exploration (BRUIE), this rover would normally float and have wheels. Its wheels would roll along on the underside of ice, as if the ice were the ground. Operating underwater, the rover would take images and collect other data to help scientists understand the important interface between ice and water.

Posted by Simon Morley at 12:25 No comments: Links to this post 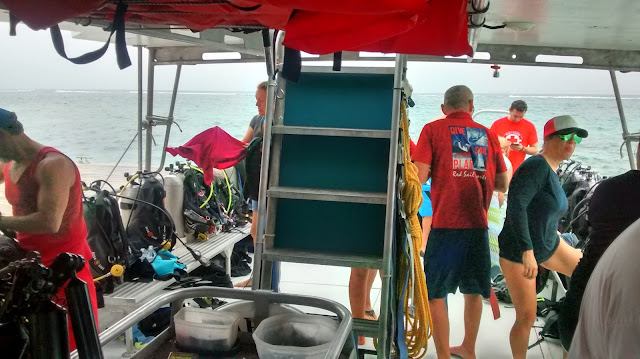 The day started as anticipated, grey, overcast and around 15-18 knots E., but we're diving so who cares! Watching the rollers coming in just off shore, it was a safe bet to go North, where we ended up at Split Rock.

As soon as we jumped in and headed through the split, we got instant shark action and seeing as everyone was heading East, we went West and was rewarded with three separate reef sharks cruising round and checking us out, up close and personal. 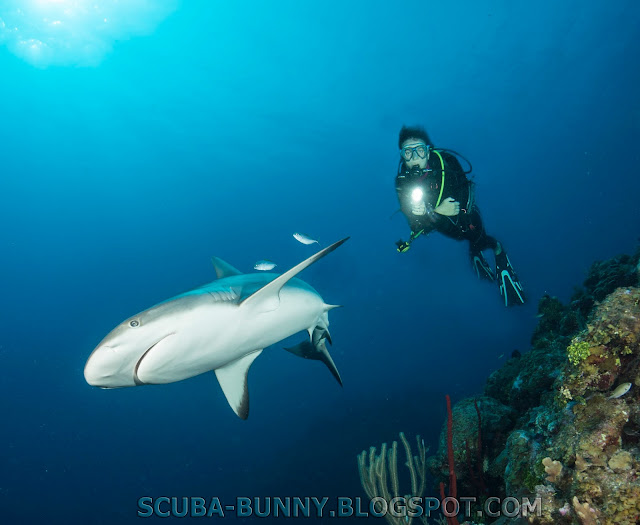 They hung around for about 20 minutes or so and then disappeared off to do better things with their time. 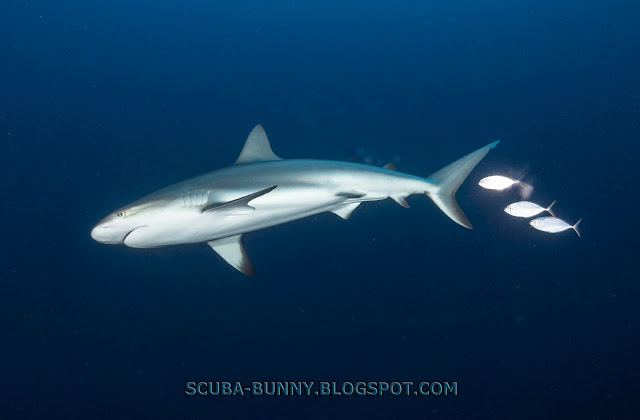 A little bit further round the corner there was a nice outcrop which house a pair of giant green morays with the added bonus of a turtle scudding past as will. Hat trick! You can just make them all out in the photo, unfortunately the turtle wasn't wholly wanting to be co-operative.  But you know what they say, never work with kids or animals. 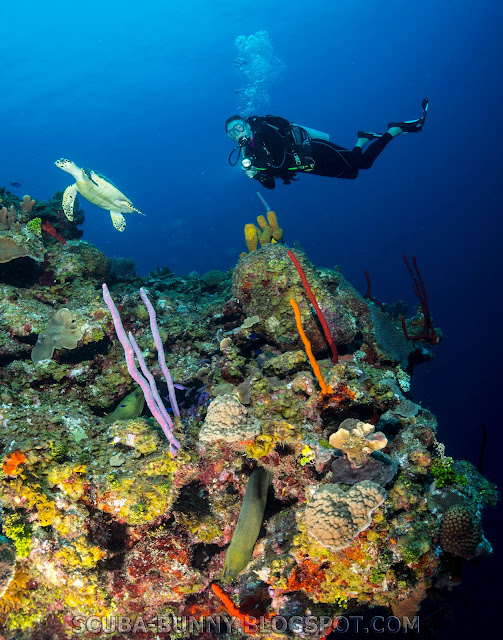 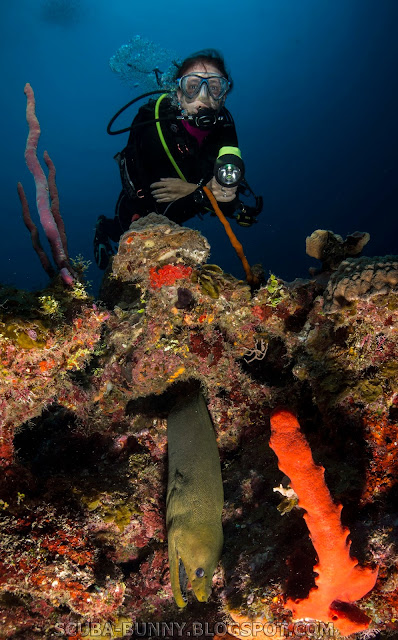 There was next to no current at this point which was an added bonus after our previous foray but the depth did put a little crimp in our NDL's so we didn't get as much bottom time as we would have liked but what you going to do?

Back on the good ship Leather back we headed back round the corner the Snapper Hole and by this time at least a good quarter of the boat was green and hanging over the gunwhales calling for Ralf and Huey. We left them to it as we enjoyed the sun as it started to creep out from behind the clouds and warmed our bones.

By the time we got in, the surface was turning pretty lively with a healthy surge and some turbidity down below. Hugging the mini wall, we headed out to get some shots at the anchor of the Methuselah before the mob arrived.The ring of the anchor is almost big enough to get your head into and makes a nice little frame for shots (thanks Capt. Nige and Nat). 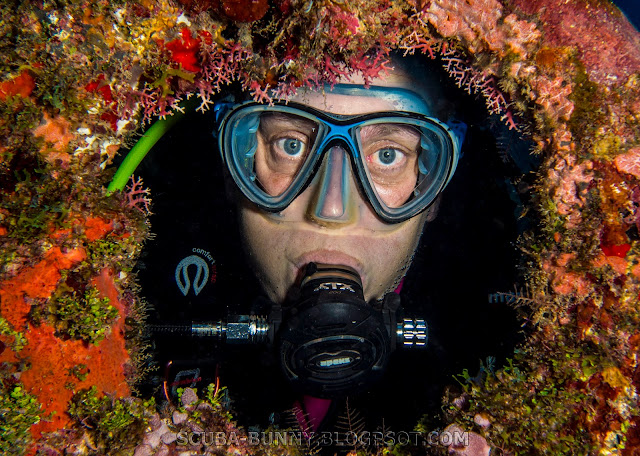 Zigging and zagging in and out of the tunnels looking for the little stuff proved to be a challenge on this dive die to the increasing swell and dropping viz but I did find a nice double act with a slipper lobster and channel crab both seeking refuge. 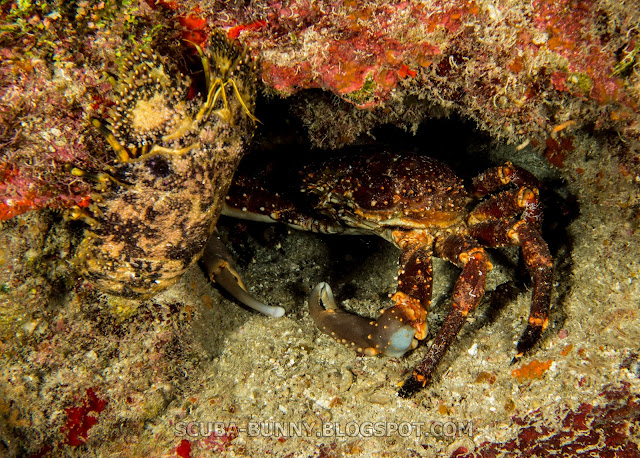 JB found a nice quad of spiny lobster under a shelf as well so is was definitely a day for crustaceans on this dive. If I had a choice I would have been in there with them as instead of bouncing off the rocks. Picked up some colourful bruises mind you, how we suffer for our art. :-D 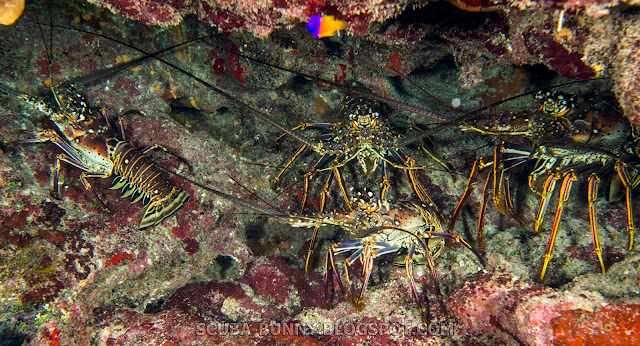 And on a final note, I would just like to offer a heartfelt thanks to the muppet who threw up all over my dive bag. Muppet. Couldn't get it over the leeward side so you had to do it on the boat. Not even an apology either, that's just rude. I don't get why people who are prone to sea sickness take a preventative before they get on the boat. Is it me or is that just common sense? On the bright side it was nice to laugh at the ongoing suffering. Cruel? Possibly. Justified? Most certainly............. 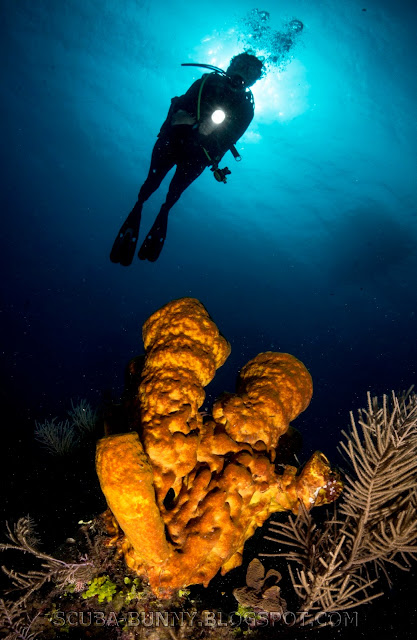 Happy world oceans day! Love the oceans and take care of them as they're the only ones we have.

"World Oceans Day, held every June 8th, is the United Nations-recognized day of ocean celebration and action. People all over our blue planet organize celebrations – which can be a huge event in your community, a special announcement, or anything in between – to support action to protect the ocean. This year, the theme is Healthy oceans, healthy planet, and we’re making a special effort to stop plastic pollution."

Posted by Simon Morley at 12:22 No comments: Links to this post

Wash away those years

A Dutch man barely out of his teens is leading one of the most ambitious ocean cleanup efforts ever: to halve the amount of plastic debris floating in the Pacific within a decade.
The man’s name is Boyan Slat, and he’s come up with a pretty ingenious way of doing it. Instead of clamoring around the globe on a never-ending junk hunt, he wants the ocean to “clean itself.” 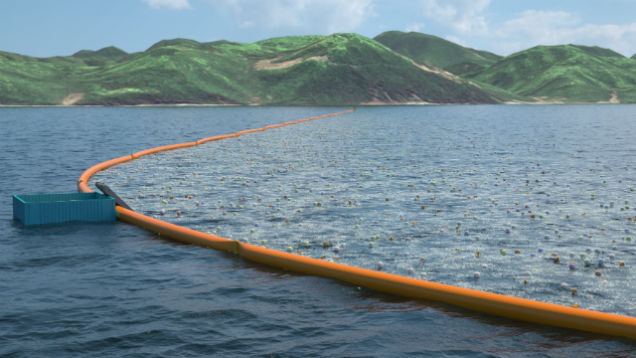 Every year, 8 million tons of plastic are dumped into the oceans. Slat’s plan is to place enormous floating barriers in rotating tidal locations around the globe (called gyres), and let the plastic waste naturally flow into capture. These barriers aren’t nets—sea life gets tangled in those. They’re big, V-shaped buffers anchored by floating booms.

Slat’s nonprofit, the Ocean Cleanup, says the current will flow underneath those booms, where animals will be carried through safely. The buoyant plastic is funneled above and concentrates at the water’s surface along the barriers for easy gathering and disposal.

Last month, it was announced that this ocean-cleaning system—which the company says is the world’s first—will be deployed in 2016. 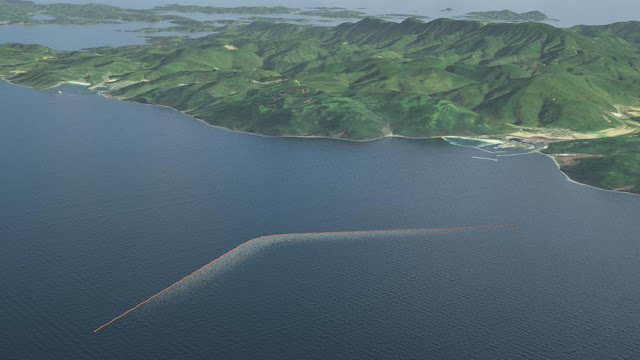 They’re planning to station it near the Japanese island of Tsushima, situated in between Japan’s Nagasaki prefecture and South Korea. The detritus-catching apparatus will be 6,500 feet wide and is being called the longest floating structure ever placed in the ocean.
Eventually, more of these storm-resistant, plastic-gathering structures will be placed around the world, if all goes according to plan.

This August, meanwhile, the Ocean Cleanup is sending 50 vessels to scour the area between Hawaii and California to make the first hi-res map of plastic floating in the Pacific.

Posted by Simon Morley at 16:04 No comments: Links to this post