It's a livin thing

We had a break on the weather on Sunday morning  with flat seas after a night of turmoil and good viz. There was eve a rainbow over the water inviting us in. All macro this morning, and it was fun just to play around for a change without any requests, deadlines or assignments to worry about, just dive and shoot. 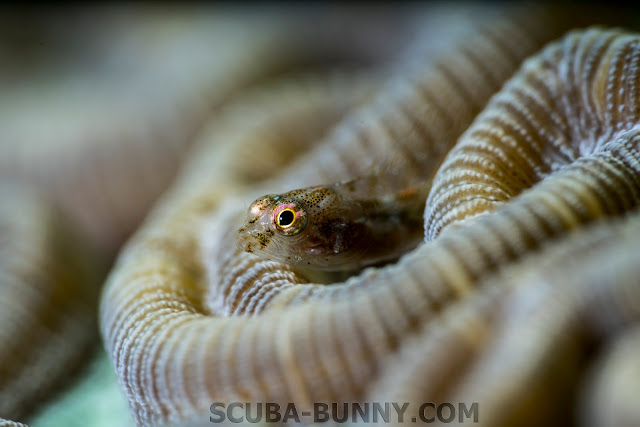 Spot was with us instantly hoping for some attention as usual (high maintenance these snappers....) and we had a good selection of blennies and gobies hiding among the hard corals in the shallows. 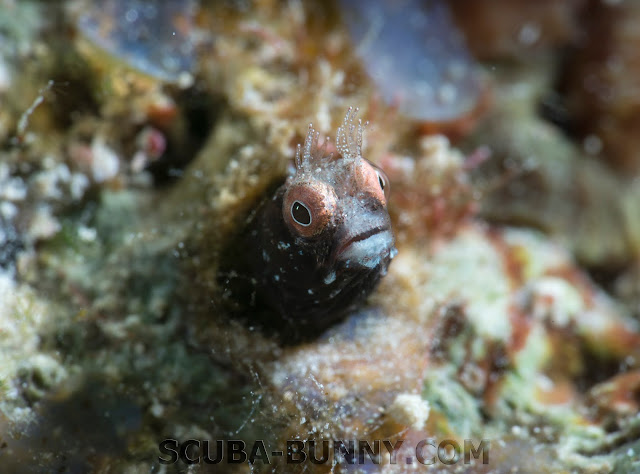 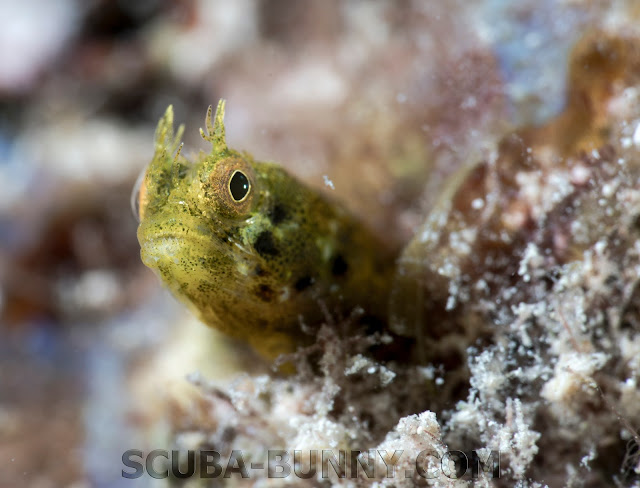 No sightings of big stuff while we were in but then again, we weren't really looking for any so that elusive hammerhead that's been spotted a few times recently will just have to wait for another day.

Some nice banded jawfish were more than happy to pose for a while but no eggs just yet though. 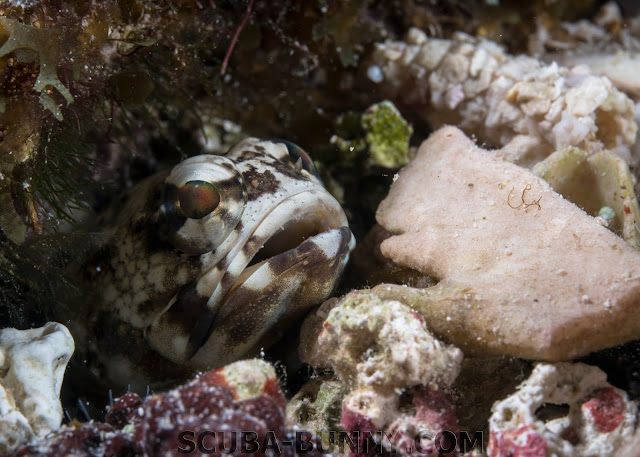 Best part of the dive was spending a good portion of it just hanging out with a leopard flatworm, which I don't see enough of over here. It was running around the place in one of the sand chutes and made for a great time, think it was about 30-25 minutes just watching and taking pictures. Well worth getting in the water for. It's not always about the big things (so women keep telling me......). 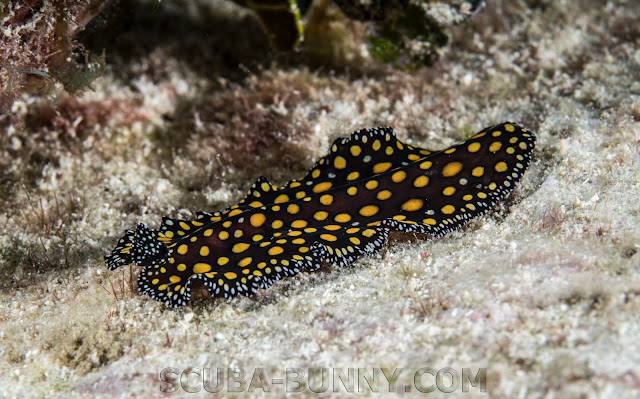 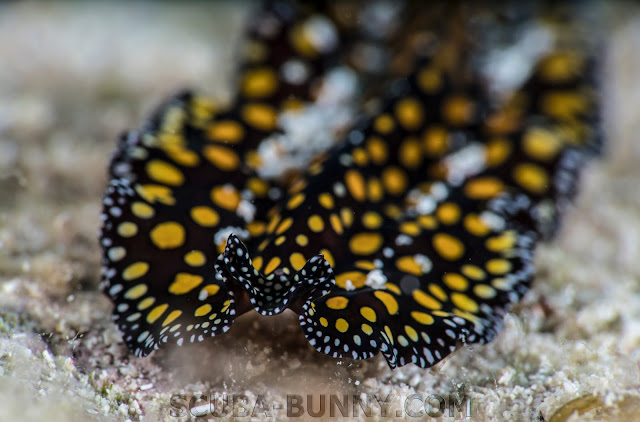 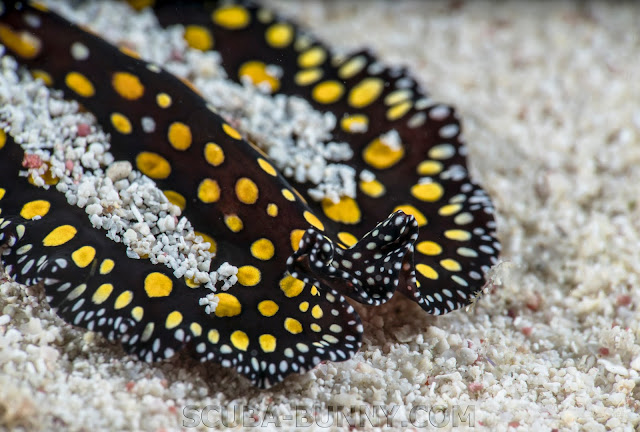 And we capped it of with a nice little flamingo tongue cowrie climbing up a sea fan with a little difficulty but it made it up there eventually. You can do anything when you put your mind to it. 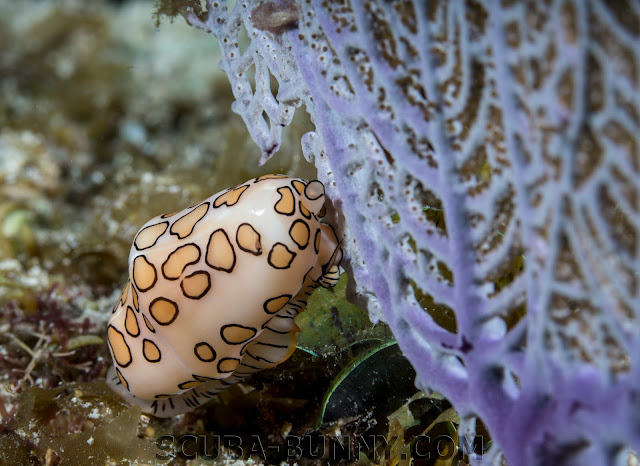 Getting out at the end of the dive proved a real who's who as everyone seemed to be turning up out of nowhere. Captain Tilley was there with his free diving mob, Captain James was borrowing the pool and Fulvio was herding his students into the car park. Just as well we were getting out as everyone was getting in........

Posted by Simon Morley at 23:43 No comments: Links to this post

There's still a few days left in the Ocean Conservation Awareness month to get down to Camana Bay here on Grand Cayman and enjoy some of the best photography in the Caribbean provided by some very talented people, including yours truly. Go on, you know you want to........


Posted by Simon Morley at 23:54 No comments: Links to this post

Nice little video showing a satellite capture of the 2017 hurricane season. Looks pretty unless your in the middle of several of them.


This was out worst season yet since Ivan went through, hopefully we won't see something like that again for a long time.
Posted by Simon Morley at 12:48 No comments: Links to this post

Sittin' on the dock of the bay

Feel free to pick up Sport Diver's special edition magazine this month "World's Best Diving - Resorts & Liveaboards". Not only is it packed with useful information but Jill gets to show off her modelling skills yet again for the camera.

You'll find her in the "Dynamic Dives" section on page 73 promoting Lighthouse Point (again) here on Grand Cayman and letting the world know about the world class diving we have here on our doorstep. Also keep an eye out for more Cayman madness in the Jan/Feb edition of Scuba Diving magazine. 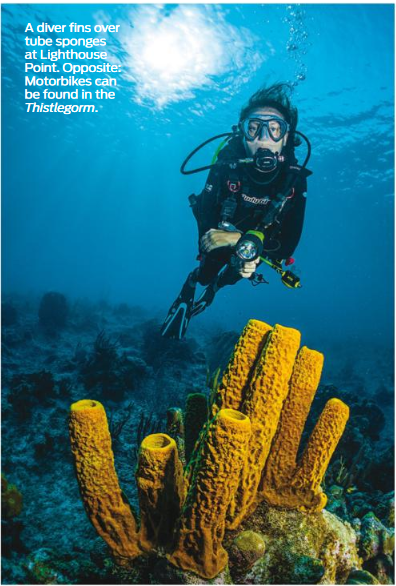 Posted by Simon Morley at 12:02 No comments: Links to this post

Not only would this be a spectacular to find, as any shark encounter would be, but to see a living fossil at that. History right before your eyes. It's nice to see that examples of this species of shark can still be found, despite our best efforts to kill them off, deliberately or otherwise.

"A fishing trawler, working to minimize unwanted bycatch and the impact of commercial fishing on untargeted species off the coast of Portugal, has caught a rare sample of a primitive shark that’s often referred to as a living fossil. The frill shark isn’t literally unknown, but it’s uncommon to catch them. It’s called a living fossil (a term also sometimes used to refer to species like the coelacanth, glypheoid lobsters, and the dawn redwood). The term refers to a species that was previously known from the fossil record, but is then discovered alive in the modern world. In the frill shark’s case, it dates back to 80 million years ago." 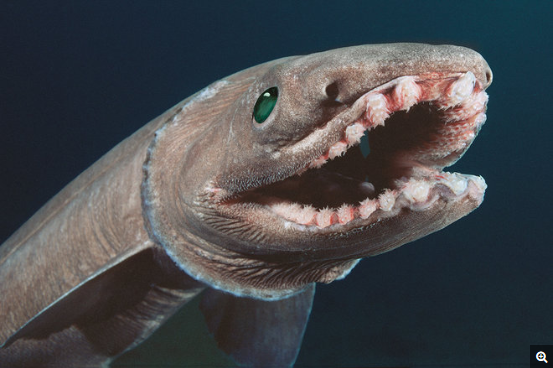 "Frill sharks have been caught around the world, but only rarely observed by humans. It’s been reported around the world but never in large numbers, typically at depths above 3,300 feet (the 2,300-foot depth of this catch is within the normal range). It’s an example of how poorly we understand the distribution and ecosystem role of many ocean-dwelling creatures"


Posted by Simon Morley at 13:14 No comments: Links to this post

Somewhere beyond the sea

So if anyone is on the island during the month of October, head down to Camana Bay take a stroll down the Paseo, you'll see some fine photos relating to Ocean Conservation month.

They held a photo contest for all the best and brightest photographers, no money involved, so I threw one in just for sh*ts and giggles and they picked it. Couldn't make the photoshoot for the newspaper as I have to work for a living but you can see everything on display for the next few weeks by some quality people including Captain Tilley, Miss Brittainy and Jim (not Kirk) to name a few.

P.S. The caption they put on my photo is not the one I wrote, they changed it, and personally, I think it's pretty crap but they have the rights to it now. Ah well. Enjoy! 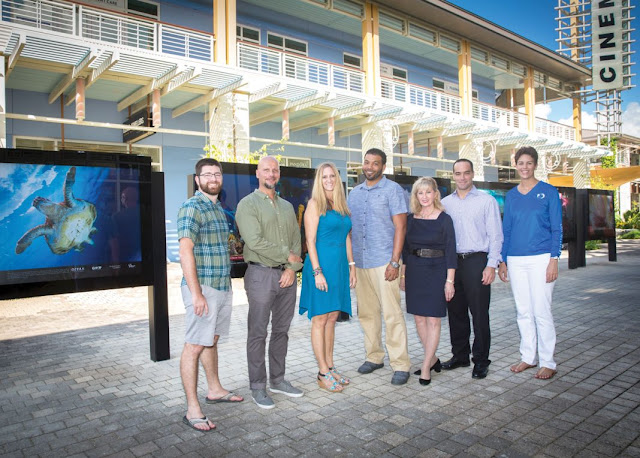 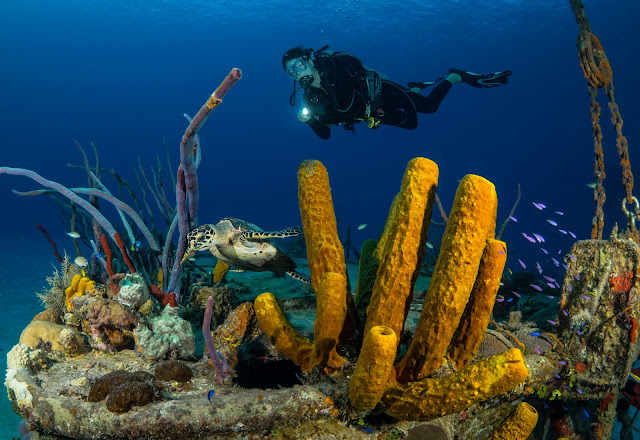 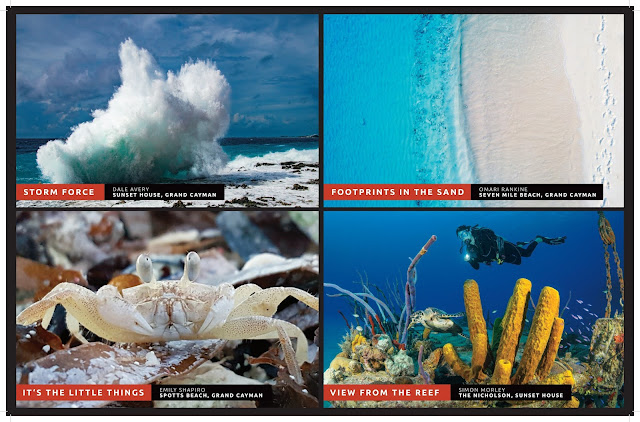 Posted by Simon Morley at 00:55 No comments: Links to this post

The weather wasn't nearly as bad as it was forecast to be but it still wasn't great but we took a risk anyway and got a quick dive in. 9 Knots NE with a mild Northerly current and decent viz but the marine live was a little lacking but I couldn't blame them for that. There were a few nurse sharks cruising the Nicholson when we first arrived but they disappeared in short order unfortunately. Probably had way more more important things to do than play with us. 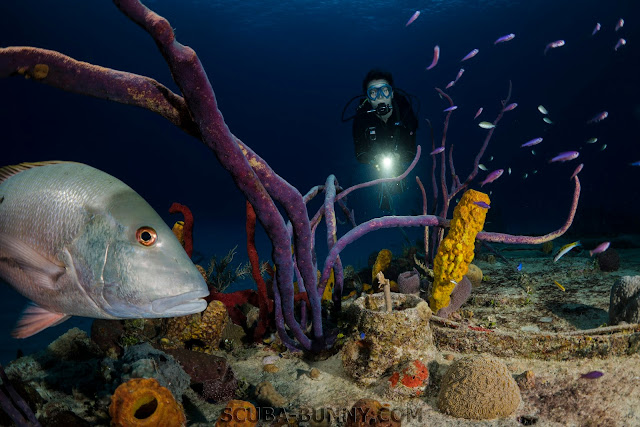 I did get them on the first few seconds of the video disappearing mid frame if you look really quickly. Took a while for Spot and Brutus to turn up and they brought Spot Jr. with them too which was nice because it's always good to see a new face. 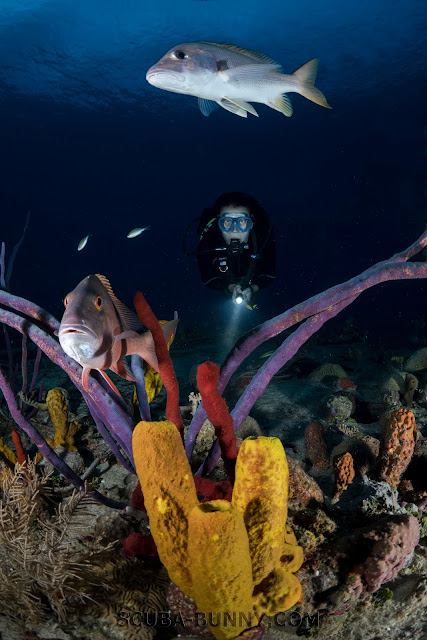 Down the sand chute and over to main wall proved a little barren in marine life but the colourful sponge and coral formations made up for it. 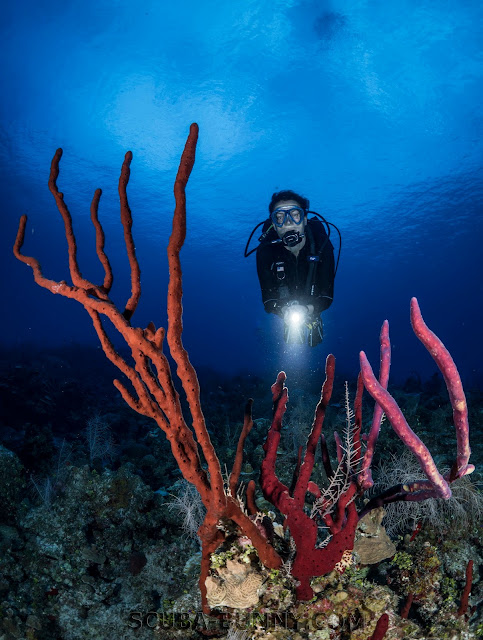 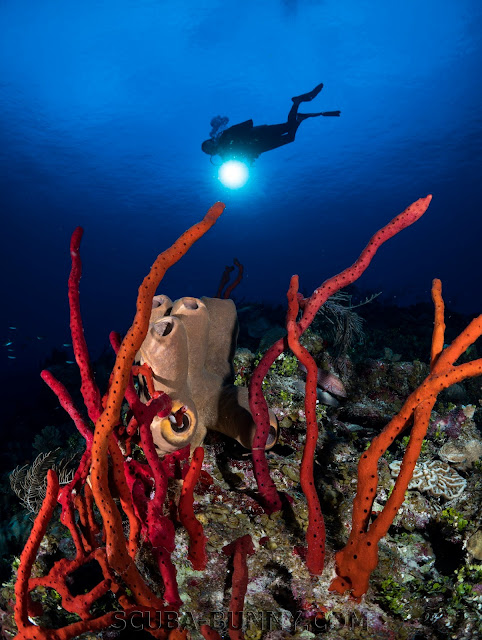 Did I mention the colours? 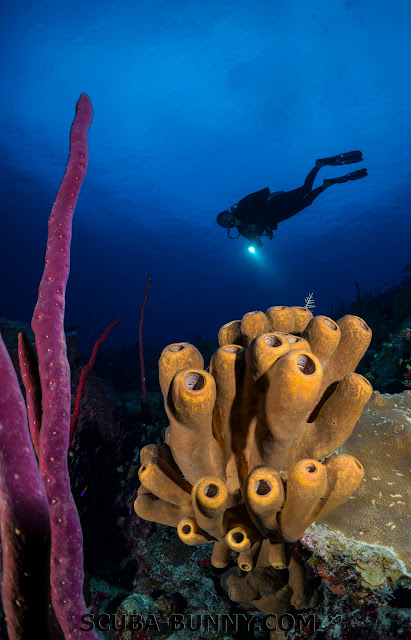 One last whizz round the Nicholson with a quick hello to Amphitrite on the way past for good measure to round things off. Don't know if there will be diving next weekend as the wind looks spectacularly crap but we'll see what we can do. 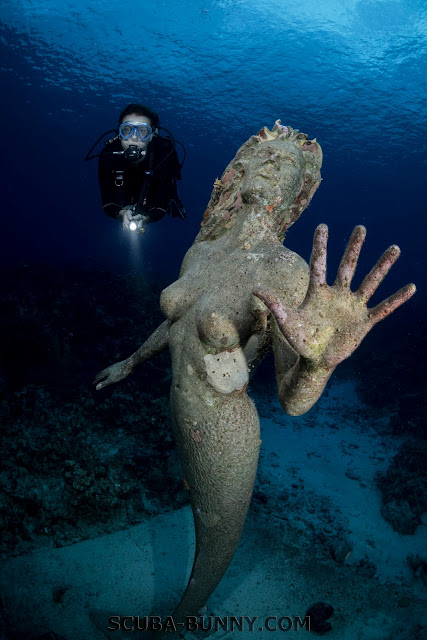 Obligatory crap video inserted below for sh*ts and giggles.


Posted by Simon Morley at 00:39 No comments: Links to this post